Wishing everybody a HAPPY CHRISTMAS and a Bird-filled NEW YEAR 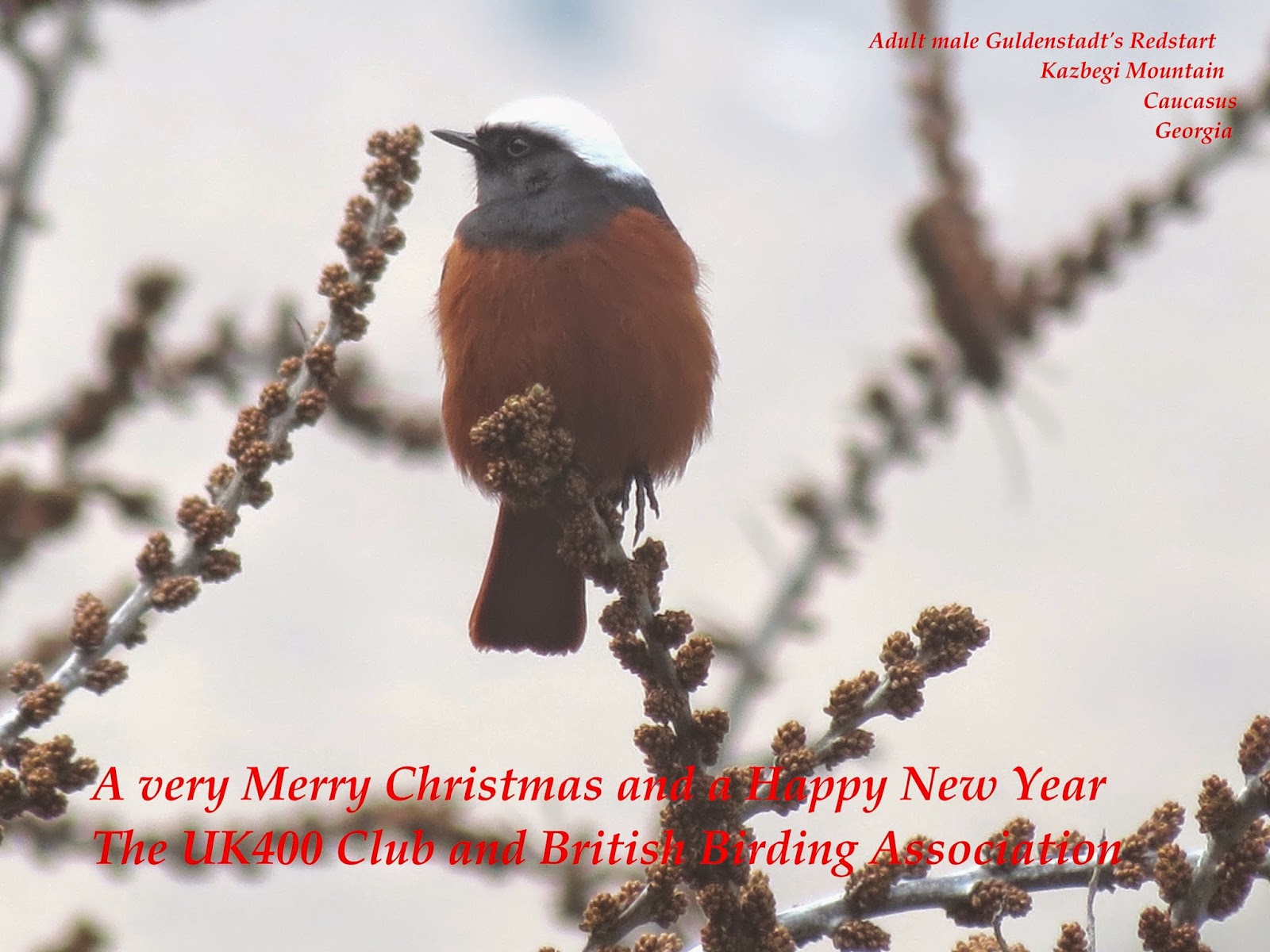 It is with great sadness that I announce the passing of Exeter birder JOHN WOODLAND who died at the age of 86 following a long illness on 30th November. John was to be found with his beloved wife Jean on every outing, the two of them spanning a birding career of over 45 years and often incorporating the Reverend Robert Kempster into their travels and midst. I first met the couple, along with the legendary 'Shrubkins' (aka Dave Hopkins) in the very early 70's in West Cornwall, when visits to St Ives Island were an essential part of the annual birding agenda. John was very unassuming, quiet and extremely appreciative of help and always was so happy, never having a bad word to say about anyone! The two of them never learnt to drive so birding was always done on foot, with over 40 years worth of Exe Estuary wildfowl & wader counts being executed in this way, but with him working for the railways, transport was not too much of a problem, annual holidays being spent birding on Fair Isle, the Isles of Scilly or North Norfolk. It was on the former that John connected with a real 'blocker' - a White-crowned Sparrow in May 1977 - but better than that, for him at least, was the finding of a Myrtle Warbler there at the same time. The pair were well into their butterflies too - finding more than just a few High Brown Fritillary sites during their ramblings - and supported Devon Birds for over six decades. It was on the Isles of Scilly pilgrimages that I go to know them best, spending many hundreds of hours in the field in search of rare migrants. John was just so keen, regardless of weather - and would trampse back with me to Watermill or Deep Point if anything was found late in the day even after we had finished a hard day's birding on the archipelago. He will be very sorely missed.
For those of you that knew John and Jean and would like to pay your respects, the funeral service is to be held at Exeter Crematorium at 1345 hours on Wednesday 17th December

A few places remaining on ROUND BRITAIN Birding Tours in 2015

I still have places left on two of my Round Britain Birding Tours in 2015 - on 23-31 January and 7-14 June. Up to 180 species are expected to be seen on the January trip and over 200 on the June, including all of the species that regularly occur in Britain, whether as resident or winter/summer visitors. Accommodation is a mixture of B & B and Travelodge/Premier Inn depending on location - for bookings or more information, contact me on LGREUK400@aol.com
Posted by Lee G R Evans at 22:23

There are still places left on my 9-day ROUND BRITAIN EXTRAVAGANSA - please email me for more details........

Likewise, places available on other tours between January and April, including Spain, Morocco/Western Sahara, Israel and Portugal
Posted by Lee G R Evans at 19:47

For those of you that have passed the milestones of 400, 450, 500 or 550 species of bird in the UK & Ireland, why not decorate your wall or office with an official recognition of that fact by the BBA. Such an accolade should be celebrated and for just £5.00 (postage & packing included), one of these could be winging its way towards you. Simply email a copy of your latest list or number to LGREUK400@aol.com for consideration... 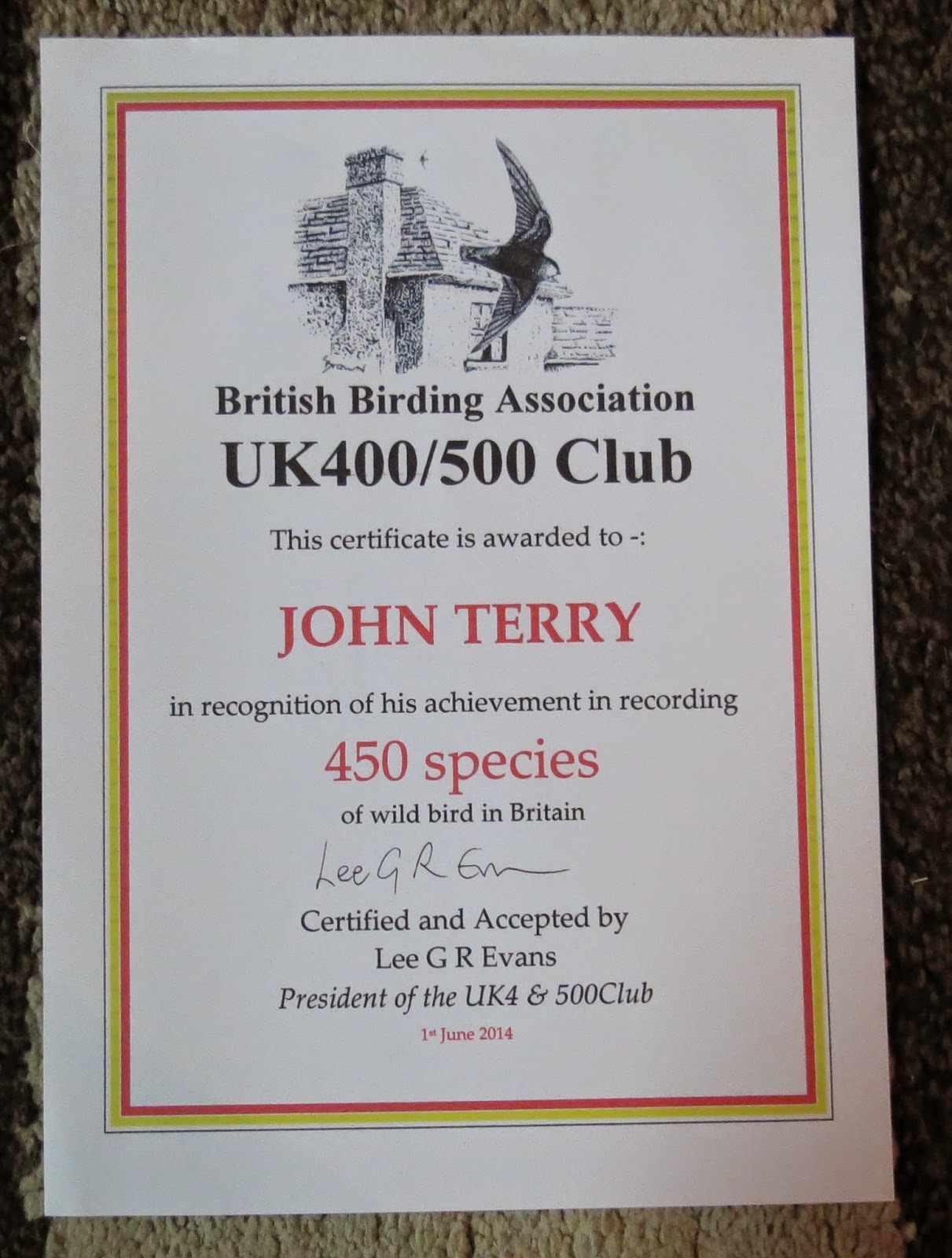