The Executive of Hertsmere Borough Council met for its regular scheduled briefing with Council officers earlier this evening.

At the meeting, the matter of DEFRA's culling of monk parakeets in Elstree and Borehamwood was also raised and the Executive discussed the concerns of campaigners - including local residents, councillors and Member of Parliament - against the cull.

The Executive believes that there are legitimate concerns around the cull and the way it has been carried out and which necessitate an immediate decision as to its continuance.

Officers were therefore instructed to advise DEFRA that permission to cull parakeets on Hertsmere land or property is to be withdrawn with immediate effect.

This will allow the Executive to consider both DEFRA's insistence as to why that the culling needs to take place, as well as its methods for carrying out the cull. It will also allow the Council to hear further from campaigners about their concerns and to await answers from DEFRA posed by both the Council and local MP James Clappison.

Further to that investigation, a report will be brought to the Executive of the Council, when we have had time to investigate the concerns around the cull, DEFRA's reasons for wishing it to continue, and campaigners evidence around the manner in which the cull has been carried out. Both DEFRA and campaigners will be invited to speak at the Executive meeting which I hope will be no later than the scheduled meeting of Wednesday 5th October. This report will then act to help advise the Council as to its responses to any potential future requests for culling from DEFRA, should any such future requests occur.

In the mean time and to repeat, officers will be informing DEFRA that permission for culling of monk parakeets on Hertsmere land and property is withdrawn immediately. 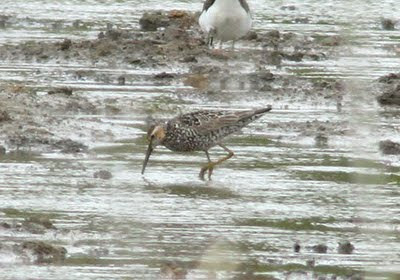 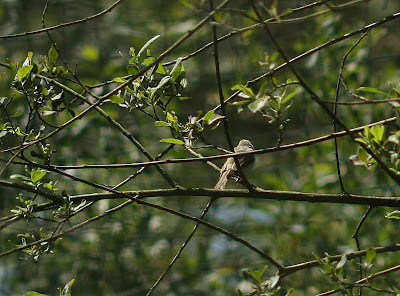 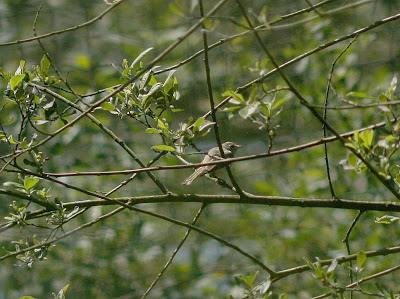 Martin Cade managed to get this reasonable shot of the Lodmoor Stilt Sandpiper whilst Ray Scally obtained the two record shots of the singing male Western Bonelli's Warbler in NW Derbyshire.

Summering BLACK KITES are somewhat unusual in Britain but an adult in some moult continues to afford excellent views as it drifts about the skies in the Carn Brea area adjacent to St Just Aerodrome (West Cornwall). A second more heavily abraded adult is present in South Devon near Kennerleigh, lingering in the Ashridge Farm vicinity (SS 824 063). Even more exceptional is a summering WHITE-TAILED SEA EAGLE in England, but the juvenile just cannot leave the Ruckland Pond area of North Lincolnshire where it has remained throughout since April.

The transitional-plumaged adult STILT SANDPIPER is still present after a week or more at Lodmoor RSPB (Dorset), commuting between the various scrapes on the reserve. It often disappears out of view for long periods, particularly when feeding on the reed-fringed scrape east of Beachdown Way.

The adult MARSH SANDPIPER continues its long summer sojourn at Blacktoft Sands RSPB reserve in East Yorkshire, whilst an adult SEMIPALMATED SANDPIPER continues to be seen from the main layby on the A178 along the causeway at West Saltholme Pool in Cleveland (a long-staying adult TEMMINCK'S STINT is also there). For its third day, an adult summer WHITE-RUMPED SANDPIPER is to be found on the high tide roost gravel pits at the south end of Snettisham RSPB reserve (Norfolk), whilst in Essex, an adult PECTORAL SANDPIPER (perhaps a regular returning bird) remains at Holland Haven wader scrape (Essex). A further PECTORAL SANDPIPER is at Frampton Marsh RSPB (Lincs), where also a SPOTTED CRAKE is present, with another at Dungeness ARC Pit (Kent) with a TEMMINCK'S STINT (where the summering GREAT WHITE EGRET remains nearby at Denge Marsh)..

A male RED-BACKED SHRIKE continues for a second day in Suffolk at Carlton Marshes SWT reserve just NW of the visitor centre, whilst in NW Derbyshire, the male WESTERN BONELLI'S WARBLER remains on territory at Arnfield Reservoir near Tintwistle. Another unusual summering passerine - a first-summer WOODCHAT SHRIKE - remains in Gloucestershire for at least its 4th day on Sodbury Common, NNE of Chipping Sodbury (take Horton Road NE from Chipping Sodbury and park carefully by the first farm buildings and walk west along the common footpath for half a mile to view).

The post-breeding gathering of Northumberland ROSEATE TERNS is gathering pace again, with at least 6 birds roosting at high tide on rocks at Ferny Ness car park (Lothian) and up to 15 in South Shields (County Durham). Interestingly, 29 were logged flying south past Church Point, Newbiggin (Northumberland), this morning.

In Dorset, the immature RING-BILLED GULL has shown up again at Stanpit Marsh, Christchurch Harbour, this evening

In Scandinavia, the TWO-BARRED CROSSBILL invasion continues, with vast numbers on the move southward. So far this autumn just a handful have reached Britain, including a female and an immature male on Unst (Shetland) and a juvenile briefly at Kilnsea, Spurn (East Yorks).
Posted by Lee G R Evans at 21:23