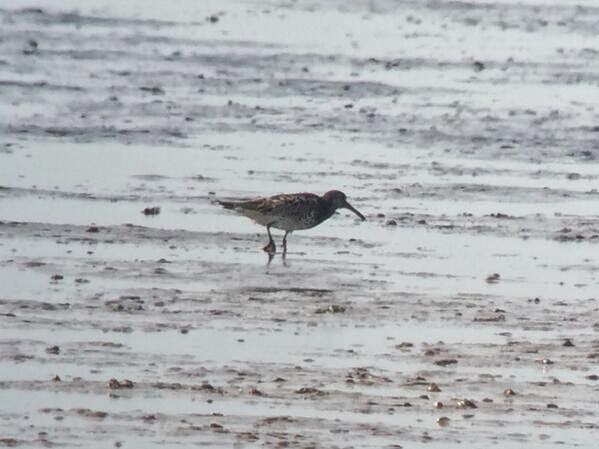 Peter Allard discovered this summer-plumaged GREAT KNOT at Breydon Water (Norfolk) late on Sunday evening whilst carrying out his regular wader counts but not really believing himself, reluctantly put the news out just before midnight. A small gathering of birders arrived at 0500 hours this morning and relocated the bird in the same area, about a mile downstream of Burgh Castle. As the tide encroached, the bird, along with the other waders on the estuary, were eventually forced down to the east end, with it roosting on the marsh in front of the hide from around 0950 hours.

It reappeared on the mud at 1420, initially feeding on the north side of the Bure before relocating to the south side about half an hour later. It then showed distantly until late evening, delighting at least 400 successful twitchers. It represents only the fourth record for Britain.

Influx of SCARCE TORTOISESHELLS - UK next

Not Guilty – Bovine TB Epidemic Caused by Cattle, Not Badgers

Not Guilty – Bovine TB Epidemic Caused by Cattle, Not Badgers
Groundbreaking new research shows how infected cattle missed by testing are key spreaders of the disease

New ground-breaking research by the University of Warwick into the spread of bovine TB (bTB) has confirmed claims by wildlife organisations like the Badger Trust and Care for the Wild that the disease is being spread by infected cattle – not badgers.

The paper, “A dynamic model of bovine tuberculosis spread and control in Great Britain”, demonstrated that the majority of herd outbreaks are caused by multiple transmission routes - including failed cattle infection tests, cattle movement and reinfection from environmental reservoirs. But the model proposes that ‘whilst badgers form part of the environmental reservoir they only play a relatively minor role in the transmission of infection’.

Dominic Dyer, of the Badger Trust and Care for the Wild, said:  "The research backs up what we have been saying all along and should be the final nail in the coffin of the disastrous badger cull policy.

“The government and the farming industry have focussed far too much on badgers and nowhere near enough on the gaping holes in cattle management policy, which have been letting this disease through. The best scientific evidence suggests that badgers are responsible for no more than six percent of new TB outbreaks, if that. This research confirms that the vast majority of new bTB outbreaks are due to poor TB testing, biosecurity and cattle control movements, so maybe farmers will now be convinced to give badgers a break and start focussing on methods that will actually work.

“We’re already seeing good results in places where improved and more frequent testing, combined with movement controls and better ‘biosecurity’ on farms, have been used – Northern Ireland, Wales, and even England in the last year have seen substantial reductions in the number of cattle slaughtered due to bTB, without any culling of badgers. The road forward is clearly being signposted by these figures – so we need the government to stop reversing up the cul de sac of badger culling and actually deal with the disease in an effective manner.”

Badger Trust and Care for the Wild acknowledge that bTB is having a terrible effect on farmers and their cattle, and that tough action is required to really beat the disease.

“One fact that simply isn’t being faced up to is that the skin test to identify cows infected with TB is not fit for purpose. It misses around one in five infected cows each time – which means that many TB infected cows remain in the herds, spreading the disease, or are transported to other farms or slaughterhouses without anyone knowing that they are infected.

“This new research understands that, which is why we must consider a policy of slaughtering whole herds if there is any trace of bTB within them. This method seems extreme but it could be the only way we can be sure infected cattle aren’t slipping through. And in the long-term, it could see the end of the disease. The method has been used successfully in several European countries, and in the UK between 1935 and 1960, and must be considered again, rather than focussing ineffectually on badgers.”
Posted by Lee G R Evans at 22:23