With a wave of earlier summer migrants than normal, total for year now reaches 320 species

The total number of species recorded in combined Britain and Ireland this year has now reached 320 species, with the addition of the following 18 since my last update in mid April -:

5) Spotted Crake (5+, including a twitchable bird at Slimbridge);

9) Roseate Tern (5+, including some very early migrants at Dawlish Warren);

The total of confirmed species now recorded in Britain and Ireland in 2010 has now reached 302 halfway through Week 15. The new additions include -:

CANVASBACKS: a gallery of North American individuals, with comments from an observer very familiar with the species

I spend much of every fall and early winter going over photos of hummingbirds, hoping to find a vagrant among them, which I can then drive out to band. I say this just to comment that ID by photo is something that is considerably different from ID in the field. Much can be hidden, or misrepresented in photos. In the photos of the apparent Canvasback, I see a narrow sliver at the base of the bill which appears only to be on the bird's left side, but not even in every photo. So, the photos do not assure me that this is a real marking, rather than just some stray reflection or other photographic effect. Shouldn't it appear in every photo of the bird's left side?

In any case, here along the Detroit River, we get a chance to view 5-10% of the world population of Canvasbacks every fall and winter (my all-time peak count has been 28,000). I confess I don't look at them all, but do look at them a lot. I have never seen anything except a completely black bill on Canvasbacks here. I have not seen a marking such as is apparent in only one of the British photos. I don't know if this helps any, but this is my perspective from someone who sees so many Canvasbacks each year that they're often ignored in pursuit of other species.

Here is a small sample of photos, from my website: http://www.amazilia.net/images/Birds/Waterfowl/Canvasback.htm. Note that a couple photos of females show a very narrow pale crescent of feathering at the base of the bill, which may or may not be analagous to what you're seeing on males...

CANVASBACKS with pale on the bill 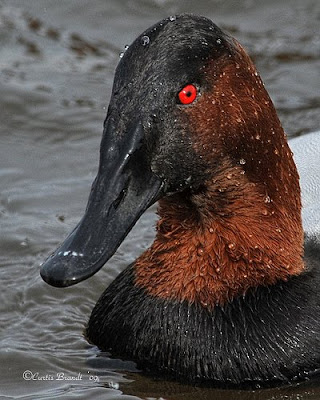 For the second year running, this drake CANVASBACK has returned to Suffolk, in East Anglia (Britain). In every sense of the word, this is a typical drake Canvasback but my main reservation is the amount of pale bluish-white half-mooning on the upper surface of the upper mandible. I have always considered this feature to be associated with in-breeding and therefore suggesting that the bird is an escape; obviously in its ancestry, there are Northern Pochard genes.

However, I am keen to hear from birders in North America with experience of wild Canvasbacks. Do you see wild birds with this same feature and if so, what proportion of birds have this feature

Of the 5 or so Canvasbacks I have seen in Europe, four of them have shown some paling on the upper bill, suggesting this may well be a frequent feature. However, on the other hand, it could suggest that the majority of our birds are escapes

I would be very grateful for any comments
Posted by Lee G R Evans at 21:22