WESTERN ORPHEAN WARBLER in Cleveland - 31 years since the last ! 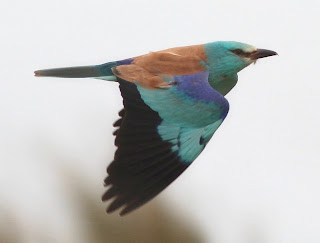 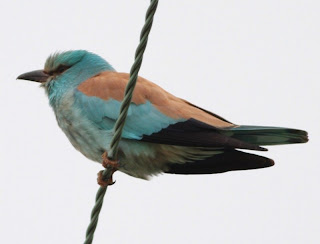 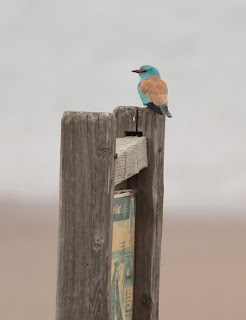 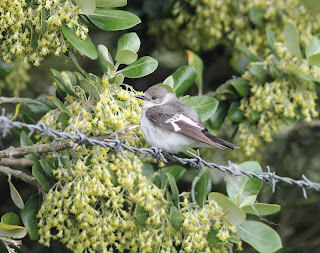 Tuesday 29 May saw Hartlepool Headland (Cleveland) one year on from last year's show-stopping White-throated Robin produce the goods yet again when a first-summer male WESTERN ORPHEAN WARBLER was extracted from a mistnet close to the infamous bowling green. Being 31 years since the last at Higher Moors, St Mary's (Scilly) in October 1981, it was no surprise that birders from all over the country were soon on their way.


Remarkably, the bird kept pretty faithful to the spartan decorative shrubby edges to the seaward bowling green and for long periods sat motionless. It did make occasional afternoon forays further afield but soon returned allowing no less than 900 observers to finally connect, including no less than 3 observers ranking amongst the Top 10 !
All six of the acceptable British records seem to be Western Orpheans, much in line with the pattern emerging elsewhere in NW Europe.

Another bird involved in Tuesday's excitement was a EUROPEAN ROLLER discovered during a 'Martin Garner Workshop' at Spurn Point (East Yorkshire). Although quickly disappearing early afternoon to the north, tonight it reappeared in Aldbrough, showing well once more on wires adjacent to the B1242 just north of the village. Martin obtained some outstanding images of the bird (see above).

Yorkshire has fared well this week with the year's first GULL-BILLED TERN at Thorne Moors yesterday afternoon (species 368 of the year), a singing ICTERINE WARBLER at Old Fall Plantation, Flamborough, a COMMON ROSEFINCH and 2 GOLDEN ORIOLES at Spurn and singing SAVI'S WARBLER and MARSH WARBLER at Blacktoft Sands RSPB (the latter visible from by Singleton Hide and the former audible from First Hide). A BLACK-WINGED STILT at Fairburn Ings was also very welcome locally, frequenting the New Flash (park only in Lin Dyke car park and NOT along the busy roadside).

A cracking male RUSTIC BUNTING appeared on Inner Farne (Northumberland) mid-morning, showing well to boat-tripping visitors this evening whilst continuing an excellent week for singing MARSH WARBLERS, one was today still in reeds north of the green footbridge behind the Discovery Centre at Cleethorpes (Lincolnshire). Another ICTERINE WARBLER was on Holy Island (Northumberland) near the Snook.

Further down the East Coast, North Norfolk held a singing male GREAT REED WARBLER briefly at Cley Marsh NWT East Bank reedbeds yesterday, with the long-staying female SERIN still at Landguard (Suffolk) and RED-FOOTED FALCONS at Rockland Broad (Norfolk) (a female on wires near the riverbank at the Beauchamp Arms) and at Minsmere RSPB (a female hunting the reedbeds and commuting to the North Marsh and Westleton Heath).

On the South Coast, Durlston Country Park (Dorset) held a single EUROPEAN BEE-EATER early morning, whilst in West Cornwall, a male IBERIAN CHIFFCHAFF is singing from the copse by the engine shed at the landward end of Kenidjack Valley. The long-staying singing male GREAT REED WARBLER is still deafening visitors at the Weston Super Mare Sewage Works (Avon), accessed from Wayacre Drove and the Anchor Inn on the A370 Bridgewater Road (ST 315 575).

A male WOODCHAT SHRIKE near Lydiate (Lancs) yesterday was an excellent local record, whilst the only RED-BACKED SHRIKE reported today - a female - was near Evie on Orkney Mainland. On the Isle of May (Fife), THRUSH NIGHTINGALE, ICTERINE and MARSH WARBLER were present today..

In IRELAND, a male WOODCHAT SHRIKE remains for a second day just west of Horseshoe Harbour on Sherkin Island (County Cork), whilst 3 GARGANEYS continue at Knockaderry Lake (County Waterford). However, Tuesday's 'Red Alert' was of a first-summer female WHITE-COLLARED FLYCATCHER on Tory Island (County Donegal) - the first record for the country.
Posted by Lee G R Evans at 21:23

Finally back from my recent trips including the hugely successful Round Britain tour.....

On the English leg, in addition to the regulars like Goshawk, Montagu's Harrier, Common Crane, Honey Buzzard and Golden Oriole, we scored with a host of mouth-watering vagrants, including the CREAM-COLOURED COURSER, GREAT REED WARBLER, BLACK-WINGED STILT, WOODCHAT, WHITE-RUMPED SANDPIPER, RED-FOOTED FALCON and much, much more

I plan to do the same two trips next year (January and May) so if you wish to join me, make sure to reserve your place

The Fish Owl trip filled quickly as expected but I still have spaces on a short trip to Sicily for Sicilian Rock Partridge, a summer trip to Egypt and seabird/seawatching trips to the Canaries and Cornwall. I am also taking reservations for trips in early 2013 - the usual Spanish Lynx tour in late February, Israel in March, Cape Verde Islands in late April and Georgia/Turkey combined in early May. For enquiries, email LGREUK400@aol.com

The first ORPHEAN WARBLER to be recorded in Britain in 31 years !

Trapped and ringed by Chris Brown at Hartlepool Headland early on 29 May, this drab first-summer remained for the rest of the day in the vicinity of the bowling greens and was eventually seen by just under 900 observers. It seems most likely that all of the 6 UK records relate to the Western species.
Posted by Lee G R Evans at 00:36

I am visiting Turkey from 20-26 June this summer, mainly with the purpose of seeing the BROWN FISH OWLS near Side, but also visiting Akseki, Demirkazik and Nemrut Dagi during the period. Please email me asap if you would like a space or further details - LGREUK400@aol.com


This family of COMMON TREECREEPERS were huddled up this weekend at Minsmere Reserve (Suffolk) in the hope of keeping warm (Sally Douglas). Hopefully they made it through the night. It has been disastrous for breeding birds thus far in 2012, with severe flooding wiping out Mute Swans, grebes, Moorhens, Coots and other waterbirds, strong winds causing chasos for high-nesting Rooks and Grey Herons and the cold weather catching out many of our commoner species, so much so that Mistle Thrushes and Long-tailed Tits are yielding on average just one young
Posted by Lee G R Evans at 21:52


With the majority of summer migrants now having appeared in one form or another, including European Nightjar, Storm Petrel and Honey Buzzard, it is just some of the more later arrivals such as Marsh Warbler that are still to make an appearance

The star attraction continues to be the first-summer male ATLAS PIED FLYCATCHER at South Landing, Flamborough Head (East Yorkshire). Present for an incredible 12th day this Wednesday, the bird was still showing well this afternoon in the sheltered ravine. Well over a thousand observers have now travelled to see the bird, trapped and ringed on 30th April.

Bank Holiday Weekend saw a flurry of activity, with a CALANDRA LARK briefly at Sandwich Bay (Kent) on Saturday 5th and a CRESTED LARK on view for just over two hours within the confides of Dungeness Power Station (Kent) on Monday 7th.

Near breeding-plumaged WHITE-BILLED DIVERS continue to be seen at Herston, South Ronaldsay (Orkney) and off Burghead Maltings (Moray), whilst GLOSSY IBISES maintain a presence in Pembrokeshire (still 3-4 at Marloes Mere) and West Sussex (2 from the North Wall at Pagham Harbour). A fine SQUACCO HERON has been commuting between Chew Valley lake and Blagdon Lake (Somerset) since 3rd, showing well near the Owl Box at the top end this morning.

In Strathclyde, the drake BLUE-WINGED TEAL remains on the small pool north of the main pool at Bridgend Farm Pool (of Whisling Swan fame), with an adult drake SURF SCOTER distantly off Port Seton (Lothian).

A few PALLID HARRIERS have been picked up on return passage these last few days, with singles in North Norfolk and Lincolnshire on 5th & 8th and a juvenile today north over Waxham (Norfolk).
The first dribs and drabs of TEMMINCK'S STINT passage has been instigated, with singles today at Idle Valley NR (Notts), with 2 at Cley NWT Reserve (Norfolk), whilst trips of DOTTEREL have included 15 at Canon's Farm, Banstead (Surrey) on 4th, 11 in a peafield west of the A928 and south of the entrance to Pluckerston Farm, Kirriemuir (Angus/Dundee) (NO 377 516) and 7 NNW over Guisborough Moor (Cleveland) today (a female also still with Ringed Plovers in the pea field south of Tetney Lock, North Lincs). A PECTORAL SANDPIPER made a fleeting visit to floods by the Exminster Marshes RSPB (South Devon) car park mid morning, with a PIED AVOCET at Vats-Houll, Whalsay (Shetland) particularly interesting, along with 2 at Strathbeg RSPB (Aberdeenshire). A female KENTISH PLOVER visited Marazion Beach (Cornwall) today, whilst a LONG-BILLED DOWITCHER appeared on the island in front of the hide at Hodbarrow RSPB reserve (Cumbria). It has been a fabulous spring for BLACK-WINGED STILTS with a pair today still present from the Southfleet Hide at Elmley Marshes RSPB (North Kent). Also exceptional was a BLACK-WINGED PRATINCOLE at Burton Mere Wetlands (Cheshire) on 3rd-4th, a very early date for this species considering their late arrival in Turkey and elsewhere in Central Asia.

RED-RUMPED SWALLOWS have appeared in larger numbers than expected with at least 12 so far this May with one still showing well today at the dam and Model Farm end of Grafham Water (Cambs) and another over the sewage works at the end of Dunes Road in Greatstone-on-Sea (Kent), whilst WOODCHAT SHRIKES have been in very poor supply this spring with only the second at the end of Peninnis Head, St Mary's (Scilly), this morning. A HOOPOE appeared briefly at Exmouth (South Devon) last night, whilst 2 EUROPEAN SERINS flew SW over St Mary's Golf Course (Scilly) this morning.

A WRYNECK is present for a third day close to the car park at Brook Chine, Freshwater (Isle of Wight)

It has been a particularly good spring for COMMON NIGHTINGALES (coinciding nicely with a BTO survey year) with vagrant singing males in Cornwall and in Cleveland at Cowpen Bewley Woodland Park. The first ICTERINE WARBLER of the year concerns a bird in bushes on the Straight Lonnen on Holy Island (Northumberland) on 8th. A first-summer male WESTERN SUBALPINE WARBLER was trapped and ringed at Portland Bill Bird Observatory (Dorset) today.

North Ronaldsay (Orkney) had an impressive fall on 8th May involving a male RED-BACKED SHRIKE, 5 WRYNECKS, Wood Warbler, 3 LAPLAND BUNTINGS, 6 Pied Flycatchers, 10 Ring Ouzels, 33 Tree Pipits, 54 Common Redstarts and 291 Wheatears. At Stromness (Orkney Mainland), a cracking male GOLDEN ORIOLE was seen near the primary school. GOLDEN ORIOLES have also been much in evidence in the southwest of England with up to 9 on Scilly and 5 in West Cornwall, and further birds in Pembrokeshire.
Very little news from IRELAND in the past week, but GLOSSY IBISES at Timoleague (Cork), Mullaghmore Lake, Morlaugh (Galway) and Ring Marsh (Wexford), a female DOTTEREL on the Myroe Levels (Derry) (6th) and 3 at Slyne Head, PURPLE HERON at Tacumshin (Wexford) (5th), a female CITRINE WAGTAIL at Ballynamona (5th) and GOLDEN ORIOLE at Cape Clear Island (Cork) (5th).
Posted by Lee G R Evans at 20:15