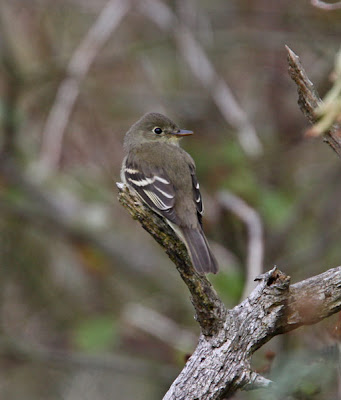 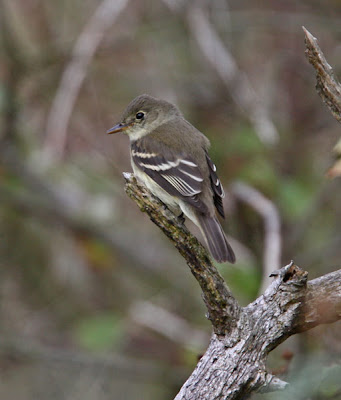 Wow, this was some find by outstanding Norfolk birder James McCallum. In an attempt to locate a Hornemann's Arctic Redpoll on Blakeney Point in the gale force NNW winds which were forecast, James braved the conditions and spent Saturday morning scouring the area closest to the point and in shelter. Little could he have known that he was going to stumble on this most of unexpected vagrants - the second ever North American empidonax flycatcher to reach Britain. After 45 minutes of pondering over an identification, news was eventually released advertising the possibility of four species - and then, with the arrival of the first of 260 or so twitchers, thoughts switched to it being a Yellow-bellied Flycatcher rather than Least, mainly because of the lemon yellow tones to the throat and underparts, the overall structure and the relatively indistinct eye-ring. Debate ensued throughout the afternoon and evening and after solicitation of approval from North America, ALDER FLYCATCHER became the more favoured option.
With the further arrival of another 600 or more observers today, the bird was eventually heard to call - a rather emphatic, anxious ''pwitt'' repeated call-note. Alan Lewis also provided photographic close-ups of the wing formulae.
Over the next few days, I shall gather together a portfolio of images but for now, here are two excellent shots taken by Jim Lawrence. In bright sunlight, the bird is yellowest on the throat, with a pale lemon wash to the underparts......
TO BE CONTINUED
Posted by Lee G R Evans at 23:37