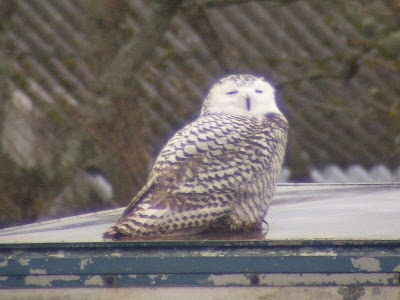 The first SNOWY OWL to be recorded on Scilly since spring 1972 arrived from the SW yesterday afternoon (over Gugh) and flew low over Porthellick Down and Pool and then Holy Vale before eventually landing on stone walls along Pungies Lane not far from Newford Duck Pond. It was a bird of the year (very heavily barred) and had clearly got blown well off course and was most likely associated with the weather front which bought the first OCTOBER snow to the Chiltern and London area since 1934 !

After moving to more sheltered accommodation in fields south of Pungies Lane, it then flew to Bant's Carn Burial Chamber, where it remained until dusk. Obviously an absolute MEGA on Scilly, some 200 local and visiting birders, as well as 40+ local residents, had seen and enjoyed the bird before dark. Residents Martin Goodey and Robin Mawer obtained excellent photographs of the bird (Robin's image is reproduced above)

The bird is still present today but of course has relocated to the more remote island of St Martin's. At lunchtime today, it was roosting on the beach just east of the Higher Town Quay.

There have been just five previous Snowy Owls recorded on the archipelago, including one which overwintered in 1964/65 (Evans 1998, Rare and Scarce Migrant Birds of the Isles of Scilly, page 57).

One boarded the Scillonian off Land's End (Cornwall) on 14th February 1934 and remained on board until the ship reached Scilly, when it flew from the rigging towards Samson and was seen on Bryher on 15th-16th February.

One remained on Tresco from 10th October 1964 until 13th March 1965, visiting Tean, St Mary's and St Agnes during the period.

The most recent record prior to this was an adult male that commuted between St Martin's, Tresco, St Mary's and Gugh from 8th March until 27th April 1972.
Posted by Lee G R Evans at 12:48