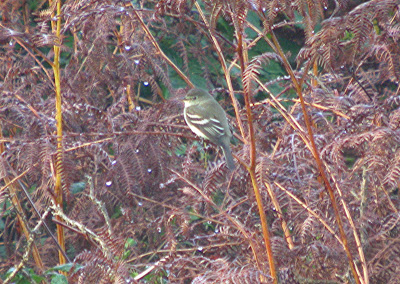 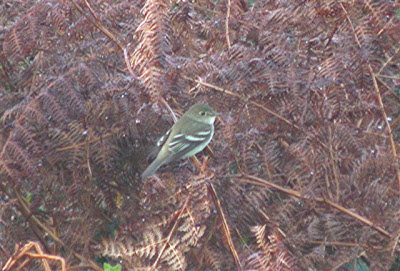 ALDER FLYCATCHER, Nanjizal Valley, West Cornwall (Steve Nuttall)
As there have been a various comments on the web concerning the ID of the Nanjizal Empid, we've put together the relevant biometrics from the bird that confirm the identification:
http://www.birdguides.com/webzine/article.asp?a=1468
Additionally, a feather shed during the ringing process may have enough skin cells on it to allow DNA analysis (though this isn't certain). This is being processed at the moment, with results expected in a week or so. The ability to distinguish between Alder and Willow is pretty good, though it does require two markers for confirmation.Note that feathers can't be taken deliberately for this type of analysis without the appropriate Home Office licence, and this certainly wasn't the case with this bird (before anyone claims otherwise).
Peter Pyle commented as follows
''Thanks for the links. I completely concur that this is an Alder Flycatcher as opposed to a Willow Flycacther. Not only do the measurements confirm it but we have found that the entirely green head and upperparts, as shown by the Cornwall bird, may be diagnostic of Alder. To make a long story short, the original description of the traillii subspecies of Willow may have actually been based on an Alder Flycatcher (according to studies by Philip Unitt). The campestris subspecies of Willow has a grayer head, contrasting with the greener back, and it now seems that there are no green-headed Willows as originally described for traillii (campestris being the only eastern subspecies of Willow). Western Willow Flycatchers look very different. In addition, the blackish wings and bright lemon wing edging strongly favors Alder over Willow.
Congratulations to those who documented this tricky identification''
Mark Grantham & Kester Wilson
BTO Ringing Scheme
Lee,I saw your ID Frontiers post and just wanted to mention that it is widely known that Alder Flycatcher has a significantly larger overall population than Willow, thus increasing the chance that your bird was an ALFL. I can't recall the study I had read or the exact numbers from it, but I believe I recall the ratio was something like 6-8 Alders to 1 Willow.I'm sure you'd have mentioned it had the bird vocalized, but the calls of both species are readily distinguished in the field (that is, when thay call in the Fall, which is quite uncommon). Alder's with a staccato 'pep' or 'pip' and Willow's with a quick 'whit'.Jay Keller,San Diego, CA
Lee, When North American birders say that the two cannot be safely separated,even in the hand, they are probably projecting the uncertainty afflictingmany individual cases (e.g., where measurements overlap or conflict) ontoeven those cases that are least ambiguous.From the data you have supplied, it seems to me most reasonable to callthis bird an Alder Flycatcher. As you note, this species is much morelikely as a vagrant to NW Europe than Willow, not only because of its wingmorphology, but especially by virtue of its more northerly breedingdistribution. The mensural data clearly imply Alder also, and it would bea most extraordinary Willow to measure out this way. It would be worth noting also the bird's bill length, both as measured,and as perceived in the field (Willow tends to look larger-billed), andsuch plumage features as the tone of the upperparts (Alder is greener) andthe prominence of the eyering (Willow is generally rather plain-faced).The call notes frequently given by migrants are also quite different, sothis could be very useful if the bird has been heard calling. If none ofthese lines of evidence is suggestive of Willow, it seems unreasonable tome to call this bird unidentified.Best regards,Shai Mitra, Long Island, NY
Hello,I am very familiar with both Alder and Willow Flycatchers, and there is no doubt in my mind that the UK bird is an Alder Flycatcher. I would vote for it in a heartbeat. Contrary to what many will say, some birds (like yours) are indeed identifiable in the field even without vocalizing. Some birds may not be so idenitifiable, but I've yet to encounter one since my childhood that I had a lengthy study of and could not comfortably identify, vocalizing or not. Unfortunately, many North American birders simply refuse to try to identify "difficult" birds. Just 10 years ago, a majority claimed that Thayer's Gulls were unideitifiable. 10 years before that, it was dowitchers.I suspect you already know these things, but here's a brief run-down of *average* or ideal characteristics (as they pertain to birds from EASTERN North America) with examples of typical birds afterwards:ALDERflat-to-rounded crownsmall billdark greenish cap contrasts with paler back and often grayish napebolder white eyeringoverall greener and more empid-likehttp://www.outdooralabama.com/watchable-wildlife/images/Alder%20Flycatcher%20Dave%20Cagnolatti.jpghttp://flickr.com/photos/mhodge/550943779/in/photostream/WILLOWrounded-to-peaked headlarger, longer bill...more pewee-likepaler crown does not contrast with rest of head and is the same shade or paler than backfainter eyering, or "lacks" it completely since it's brownishoverall less paler, colorful, and more pewee-likehttp://pie.midco.net/dougback/miscphotos/willow_flycatcher.jpghttp://www.birdcapemay.org/tigrina/2007/images/fieldid_oct07_5.jpgI put the most stock in the bill, head shape, and the cap-to-back contrast. Head shape can and does change depending of behavior, though, of course, and needs to be examined over a lengthy study.Michael O'Brien has a nice run-down here:http://www.birdcapemay.org/tigrina/2007/quiz_1007.shtmlThe newer versions of the National Geographic field guide nicely show the differences between the two species. The Sibley guide is not too good with the empids in my opinion.Please don't hesitate to write back with any questions. I hope I've ben of some help.Best wishes,Michael L. P. Retter---------------------------------W. Lafayette, Tippecanoe Co., INmlretter AT yahoo.comhome: 309.277.7136cell: 309.824.7317http://xenospiza.com/Tour Leader, Tropical Birdinghttp://www.tropicalbirding.com/
Posted by Lee G R Evans at 12:38