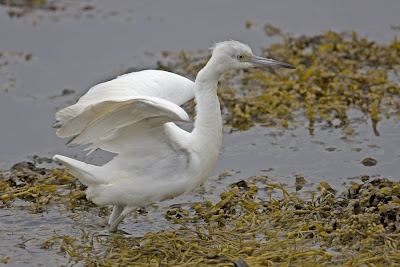 Juvenile Little Blue Heron, Barnaberg Bay, Letterfrack, County Galway, 7 October 2008 (Jim Lawrence)
A wave depression which arrived from the Atlantic after just two days appears to have deposited yet another batch of Nearctic vagrants in Britain and Ireland, on a broad front from County Cork to Cornwall.

The first SCARLET TANAGER since 1985 was discovered by Kieran Grace this afternoon 10 miles WSW of Castletown Bearhaven at Garinish Point. It was seen at 5.40pm but could not be relocated between then and dusk despite searching.Please park only by the pier or by the Standing Stones and walk back; DO NOT PARK ALONG THE ROAD.

Further north, in County Galway, the juvenile LITTLE BLUE HERON remains in Barnaderg Bay, Ballynakill Harbour, where it is showing extremely well, often down to 40 yards, on the rocky shoreline either side of the two piers about 1 mile west of Letterfrack.

DIRECTIONS: It is about 2.5 hours driving from Shannon Airport, bypassing Ennis on the N18 to Gort then Galway. From the Galway North Ring Road, follow signs for N59 Clifden and after 52 kms, turn right on the Connemara Recess R334 towards Letterfrac. This road then rejoins the N59, where turn left and continue to Letterfrac village and beyond. The last 78 kms is on relatively poor roads (very windy, narrow and often bumpy) so take extreme care.

In Cornwall (following one found dead on St Mary's, Scilly, yesterday), a COMMON NIGHTHAWK flew in from the direction of the sea between Church Cove and Lizard Point at 1700 hours and was then relocated just SE of the main Lizard village at 1815, flying over the field between Bass Point and the Lifeboat Station and at dusk along the clifftop between Church Cove and Bass Point.

Please park in the NT car park or in the village - DO NOT PARK IN CHURCH COVE.

On the Isles of Scilly, the AMERICAN BUFF-BELLIED PIPIT remains on Bryher at the north end of Popplestones Bay, with an AMERICAN GOLDEN PLOVER on the Airfield and up to 6 Yellow-browed Warblers scattered around the islands.

Also of Nearctic origin was a first-winter WILSON'S PHALAROPE present at Cley Marsh NWT (Norfolk) for a few hours, commuting between Pat's Pool and North Scrape (and last seen early afternoon), with a juvenile AMERICAN GOLDEN PLOVER on Barra (Outer Hebrides) and a drake Ring-necked Duck on Loch of Tingwall (Shetland).

A juvenile RED-NECKED PHALAROPE was noted off Dungeness Beach (Kent) today, with a PECTORAL SANDPIPER at Grove Ferry (Kent) and GREY PHALAROPES storm-driven to Sennen Cove (Cornwall) (25+), Porthgwarra (Cornwall) (20), Lodmoor CP (Dorset) (9) and Pendeen (Cornwall) (5) and inland at Draycote Water (Warks) and Cheddar Reservoir (Somerset). A few juvenile SABINE'S GULLS were also noted along the South Coast, whilst in the North Sea, 50 or more LITTLE AUKS were counted off Burnmouth (Borders).

Three RICHARD'S PIPITS were on Fair Isle today (with others on Brownsman, Farne Islands and at Penmon Point on Anglesey), as well as Bluethroat and Common Rosefinch.