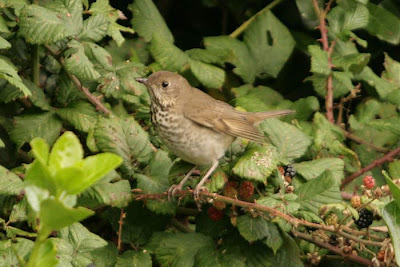 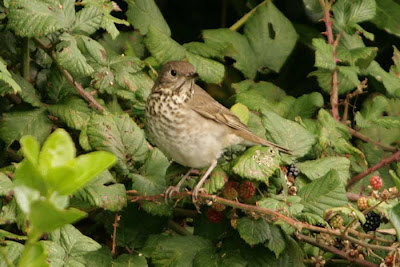 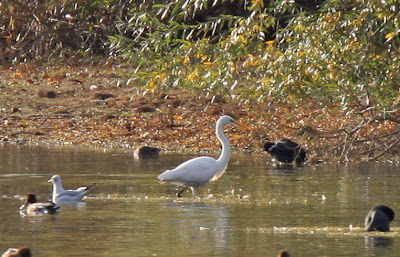 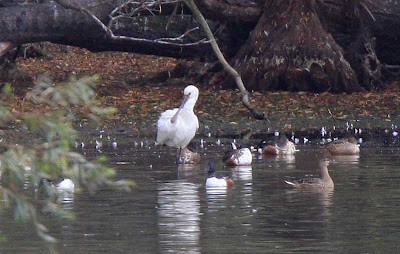 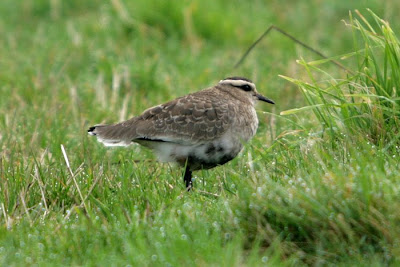 
The first RED-FLANKED BLUETAIL for Scilly was discovered mid-afternoon in fields adjacent to Salakee Farm, St Mary's, where it showed well intermittently up until dusk (John Heddon et al), whilst on St Agnes, a first-winter BOBOLINK was seen several times (mainly in flight) this afternoon on Castella Down (Graham Gordon et al). The GREY-CHEEKED THRUSH continues to show well at intermittent intervals on hedgerows and in bushes between the Coastguard Cottages and Troy Town on St Agnes, where also the BLYTH'S REED WARBLER remains in Chapel Fields. An OLIVE-BACKED PIPIT is frequenting a weedy field below Smuggler's Cottage on St Agnes (2nd day) and can be viewed from the gate, whilst a LITTLE BUNTING was seen briefly on Wingletang Down. A RICHARD'S PIPIT remains on St Martin's (on the south side in Marrams at the SE end of St Lawrence's Bay) with a PECTORAL SANDPIPER still on Tresco Great Pool.

A BAIRD'S SANDPIPER is present for a second day just south of Burnham-on-Sea (Somerset) on the Brue Estuary. Park in Highbridge and follow the footpath WNW from the A38 along the south side of the River Brue and after a mile view the mudflats. High tide is optimum for viewing at this site - ST 305 475. Meanwhile, the late juvenile PECTORAL SANDPIPER is still present 2.5 miles WNW of Pocklington and NW of Barmby Moor north of the A1079 on the flood by Feoffee Common Lane SE 763 503 (East Yorks).

The long-staying adult WHITE-BILLED DIVER continues to moult in Water Sound, South Ronaldsay (Orkney) (view from the road) whilst in North Devon, the 2nd-winter drake KING EIDER continues to show at high tide between the Royal George Inn and the Lifeboat Station.

In North Buckinghamshire, the drake Ring-necked Duck has returned once more to Foxcote Reservoir, with the drake FERRUGINOUS DUCK further south at Calvert BBOWT Lake and the other drake still continues to show at the north end of the Amwell NR complex (Herts) on Holycross Lake. A further drake continues at Weston Sewage Works (Somerset), where it is favouring the furthest bed, whilst an adult drake LESSER SCAUP is present at Hogganfield Loch (Clyde) for a third day..

The juvenile Eurasian Spoonbill remains at Abberton Reservoir (Essex), with the GREAT WHITE EGRET there again on 20th, whilst a further GREAT WHITE EGRET remains at Minsmere RSPB (Suffolk), visible from Island Mere Hide. Two Spoonbill continue at Titchwell RSPB (Norfolk), with up to 15 on Brownsea Island (Dorset) in recent days.

A GREY PHALAROPE is at Chard Reservoir (Somerset), with CATTLE EGRETS at Sandy Haven (Pembs) and Meare Heath (Somerset) (2).

In the North of Scotland, a CACKLING CANADA GOOSE is regularly visiting the Whooper Pond at Caerlaverock WWT (Dumfries & Galloway) (often on its own) whilst the regular TAVERNER'S CANADA GOOSE continues to consort with the Barnacle Geese flock. The ROSS'S SNOW GOOSE is still present on Simonswood Moss (North Lancs) with 207 TAIGA BEAN GEESE back on their wintering grounds in Forth in fields opposite Luckenburn Farm.

At least 1 juvenile AMERICAN GOLDEN PLOVER is with European Golden Plovers on The Range, South Uist (Outer Hebrides), with at least four PECTORAL SANDPIPERS nearby on Loch Bee and a RED-BREASTED FLYCATCHER at Loch Druidibeg. A SIBERIAN STONECHAT is at North Collafirth (Shetland), with a LITTLE BUNTING at Skaw (Unst) and a first-winter HORNEMANN'S ARCTIC REDPOLL with Greenland Redpolls at Norwick (Unst). Another was at Isbister at North Roe on 19th.

A WHITE'S THRUSH was a fabulous find in Dyce (Aberdeenshire) on 18-19, where it elusively frequented the largely private Parkhill House Estate (Paul Baxter) and was seen several times in flight around the estate's ornamental lake, whilst the first RED-EYED VIREO for the Isle of Wight was seen at St Catherine's Point on 18th.

After such excitement in recent weeks, IRELAND has finally simmered down, with the adult winter FORSTER'S TERN at Cruisetown Strand (Co. Louth) and juvenile AMERICAN GOLDEN PLOVER at Doonbeg (Co. Clare). A COMMON CRANE is present for a second day in Bantry (Co. Cork) (at Pearson's Bridge) and a late BARRED WARBLER on Mizen Head (Co. Cork).
Posted by Lee G R Evans at 21:25