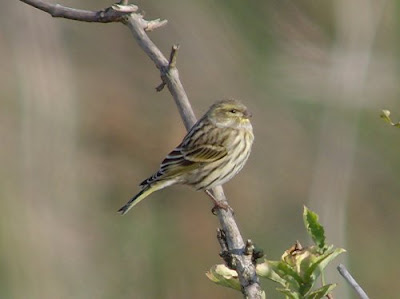 First-winter European Serin, Rainham Marsh RSPB, London, 22 October 2008 (Richard Bonser)
The three EUROPEAN SERINS (discovered mid-morning by Howard Vaughan) were showing very well at Rainham Marsh RSPB (Essex/London) throughout the day, feeding on the weedy embankment just north of the promontory of land opposite the landfill site. They kept very much together (apart from a brief period when all three were flushed by a Land Rover), often feeding on the same teasel, and involved two streaky juveniles and a much brighter, yellower bird (especially about the head and breast) which was assumed to be an adult.

Park at the RSPB Information Centre and continue west along the tarmac inner sea wall (cycle track) for 1.2 kms where you walk adjacent to the landfill site. The track veers around to the right and passes an obvious promontory of land. Walk out to the tip and carefully scan the weed-covered slope below you. The Serins are largely independent of other finches, but closeby are up to 35 Goldfinches, a few Greenfinches and 25 Linnets. Up to 12 COMMON STONECHATS were also in the vicinity, 3 SISKINS flew west, whilst a single PEREGRINE was roosting on the pylons.

A RICHARD'S PIPIT was seen by several observers close to the Information Centre during the morning but flew off strongly west at 0935, and a DARTFORD WARBLER disappeared into scrub opposite the landfill site at around the same time.

A single SCANDINAVIAN ROCK PIPIT flew over the seawall heading towards the Stone Barges.
Posted by Lee G R Evans at 20:56