Cape Clear Island Bird Observatory warden Steve Wing had a very brief and poor view of a bright warbler on Sunday morning (24 August) but was unable to clinch its identification. Despite searching by four birders all Sunday afternoon and Monday morning, the bird was not seen again until today, when it reappeared in the same clump of Sallows and Willows by Lough Errul, at the west end of the island. On this occasion, the bird showed well and was soon identified as a first-winter female YELLOW WARBLER - the third record for Ireland.

The bird continued to show well throughout the afternoon and evening, generally in Michael Vincent's garden by the Lough. The superb photograph below was taken by Seamus Enright.

Just after midday, a further YELLOW WARBLER was discovered, this time in the Three Castles Head area at Mizen Head (County Cork). Although often elusive, this bird too remained for the rest of the day, and was seen well by several observers at 1930 hours. 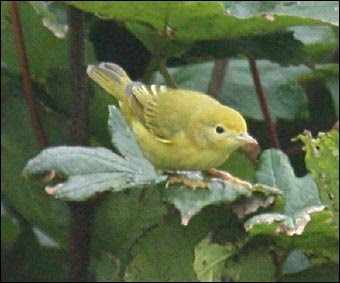