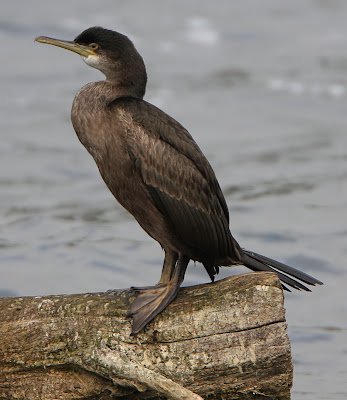 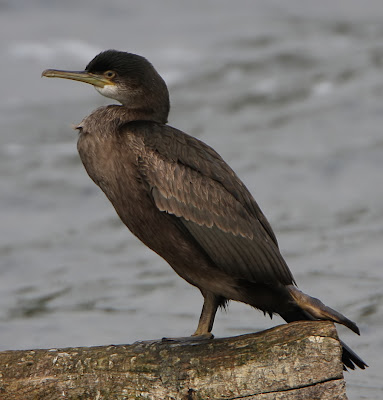 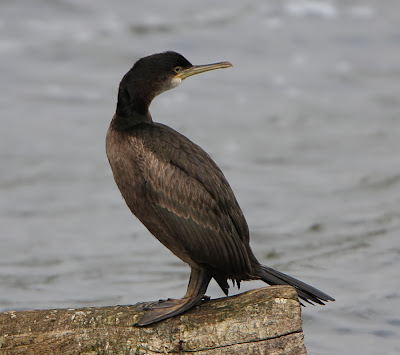 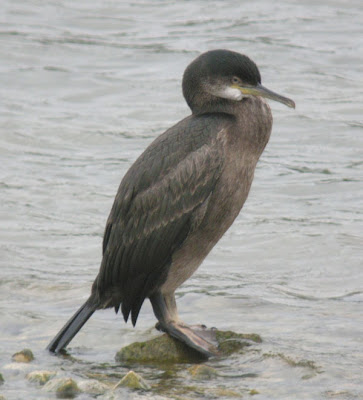 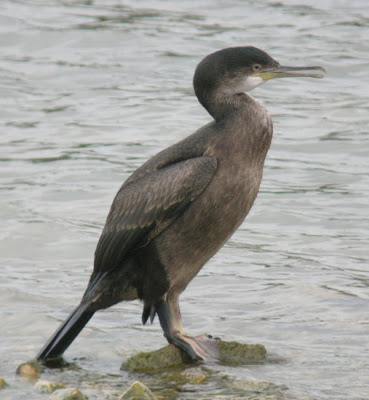 Displaced juvenile Eurasian Shags inland, including up to 6 individuals at Draycote Water (Warks) (upper three photographs taken by Dave Hutton) and a single at Calvert BBOWT Lake (Bucks) (Tim Watts)
Since mid-August 2008, up to 28 Eurasian Shags have been displaced inland, from Greater Manchester south to London. None so far have been ringed and only one (at Withins Reservoir) has been in poor health.
Analysis of Records
All records involve juveniles
The first to appear was at Hilfield Park Reservoir (Hertfordshire) on 15-17 August. This was followed by the first of at least 7 in Cambridgeshire - at Ferry Meadows Gunwade Lake on 18-19, then on Overton Lake on 21st.
Following one at Pitsford Reservoir Yacht Club (Northamptonshire) on 19th, up to 5 were then discovered at Grafham Water (Cambs), with three showing well as they roosted on pontoons off the Fishing Lodge from 20-21 and two more off the Dam on 21st; one remained until 22nd. Nearby, a further juvenile was at Diddington Pits, Paxton Pits NR (Cambs) on 20-21, with possibly the same bird on Island & Pumphouse Pit on 22 and Heronry South Pit on 23-25.
The first of 6 juveniles arrived at Draycote Water (Warwickshire) on 21st, with all 6 noted on 23rd and up to 5 remaining until 26th. At the main Nene Barrage Lake at Clifford Hill GP (Northants), a juvenile remained there or on the adjacent Fishing Lake from 21-25, with a second bird present on 24th.
In Greater Manchester, a juvenile at Withins Reservoir from 23rd was taken into care on 25th, with further singles appearing at Harrold Country Park (North Beds) on 23-25, Fowlmere RSPB (Cambs) (flew off south at 0750), Calvert BBOWT Lake (Bucks) on 24th (present from mid-morning to midday), Rother Valley Country Park (South Yorks) on 24th, Earls Barton Mary's Lake (Northants) on 24th and Farmoor Reservoir (Oxfordshire) on 24th.
More recently, singles were at Daventry Reservoir Country Park (Northants) on 25th, Eyebrook Reservoir (Leics) on 25-26 (flew off at 0745) and at Queen Mother Reservoir (London/Berks) on 26th.
Mike King has added ''Although Gloucestershire is not inland it is quite a way from open sea and we too have had an influx of Eurasian Shags. On Tuesday 19th August five juvenile Shags were present over high tide at Slimbridge WWT. On Friday 22nd August a flock of 12 Shags flew N over Sharpness and circled high over Purton/Slimbridge. Possibly including some or all of the five birds above but more likely all new birds. Singles and twos have been turning up since the first date around the Severn Vale as well''.
Terry E Bond kindly supplied me with a further record from Somerset, pre-dating the first at Hilfield - a juvenile at Barrow Gurney Reservoirs on the evening of 13 August (Chris Stone)
Posted by Lee G R Evans at 10:08