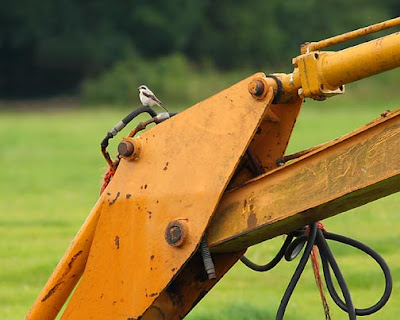 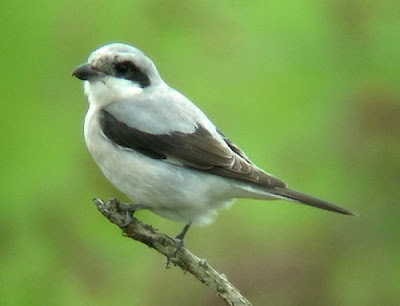 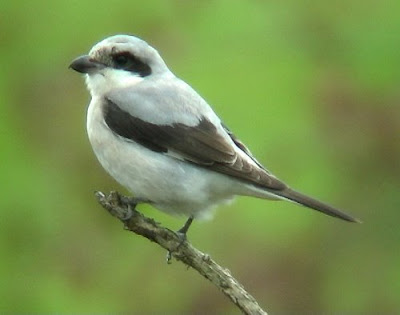 The bottom two images (videograbs) were taken by Stevie Evans and the upper (perched atop the yellow digger) by Jeff Hazell.


Since Saturday 2nd August, an adult female LESSER GREY SHRIKE has been frequenting some Oak trees, brookside scrub, gorse clumps and fenceposts on Hartland Moor and Middlebere Heath in the valley just west of Wych Heath, by the Corfe River (at cSY 966 843). It represents only the 5th Dorset record, following singles near Hurn (shot) in September 1842, in Wareham Forest on 23 August 1965, briefly at The Nothe, Weymouth, on 18 October 1987 and at Stoford on 20 May 1989.

Leave the A351 just north of Corfe Castle at the Norden roundabout and follow the minor road to the left for 1.5 miles to Scotland Farm. Just beyond there, park sensibly and courteously at the entrance to the public bridleway at SY 961 841 and continue past the gate to the first stile. From here, follow the new fenceline NE and after 200 yards, start searching the fenceposts for the shrike. From the far end of the fence, a line of gorse goes away from you and on the dead gorse protruding is another favoured hunting post. If not here, the bird can be found in the bushes and Oak trees bordering the Corfe River, particularly where a new ditch is being dug out (eg in the area with the yellow mechanical digger). The bird is typically mobile and wide-ranging.
Posted by Lee G R Evans at 00:14