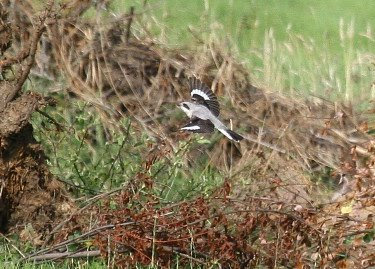 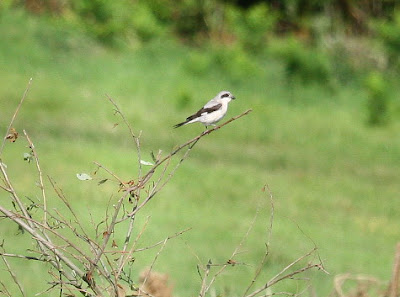 In CORNWALL, a summer-plumaged SPOTTED SANDPIPER is today on the Camel Estuary west of the B3314 Trewornan Bridge at the Amble Dam sluice and viewed from the CBWPS Burniere Hide (at SW 982 740), whilst in CAERNARFONSHIRE, a male MONTAGU'S HARRIER has been present all day hunting over the north side of the Cob Embankment at Porthmadog.


In HAMPSHIRE, the adult WHITE STORK is again south of Ringwood in the Avon Valley on the flood plain between Bickton and Christchurch in the Special Protection Area.

At the opposite end of the country, Shetland and Orkney continue to dominate, with the Sumburgh Head area yielding a MELODIOUS WARBLER (exceptional so far north), a male RED-BACKED SHRIKE and 6 TWO-BARRED CROSSBILLS (including an adult male - the largest single gathering ever recorded in Britain) and yesterday's juvenile Common Swift (previously thought to be a Pallid) still showing well commuting back and forth over the cliffs at Sumburgh Head. A further TWO-BARRED CROSSBILL is showing well this afternoon feeding in Thistles west of the football pitch at Tresta Links on Fetlar, with another two (females) on North Ronaldsay Observatory Gardenwhilst two more juveniles remained on Fair Isle yesterday afternoon. Meanwhile, the summer-plumaged adult WHITE-BILLED DIVER remains in Hope Bay, South Ronaldsay (Orkney) and moulting adult PACIFIC GOLDEN PLOVER on North Ronaldsay, with a BUFF-BREASTED SANDPIPER on the north end of North Ronaldsay (and another adult at Doonfoot, Ayrshire), whilst an adult LESSER GREY SHRIKE dropped in on Tiree (Argyll) briefly (at Balephuil). A Common Rosefinch was at Skaw, Whalsay, on 5th.


Activity elsewhere is rather bland in comparison, with an adult Sabine's Gull north past Hartlepool Headland (Cleveland) and the drake Hooded Merganser at Radipole Lake RSPB (Dorset)


A PALLID SWIFT (re-identified as a juvenile Common Swift) was at Sumburgh Head (Shetland) showing well around the cliffs by the cattle grid early afternoon and evening, with yet more TWO-BARRED CROSSBILLS on Shetland - single juveniles at Norwick, Unst, and on Fair Isle.

Spoonbill: immature still at Breydon Water (Norfolk), with 7 more in Poole Harbour (Dorset) at Middlebere, 4 at Cley NWT North Scrape (Norfolk) and another on the Alaw Estuary at Llanfachraeth (Anglesey) and a juvenile on the River Taw at Pottington (North Devon). One also pitched down at Ferry Meadows CP (Cambs) briefly at 0845

The star bird throughout the weekend and today is an adult female LESSER GREY SHRIKE which is frequenting some Oak trees, brookside scrub, gorse clumps and fenceposts on Middlebere Heath in the valley just west of Wych Heath, by the Corfe River (at cSY 966 843). It represents only the 5th Dorset record, following singles near Hurn (shot) in September 1842, in Wareham Forest on 23 August 1965, briefly at The Nothe, Weymouth, on 18 October 1987 and at Stoford on 20 May 1989.

Leave the A351 just north of Corfe Castle at the Norden roundabout and follow the minor road to the left for 1.5 miles to Scotland Farm. Just beyond there, park sensibly and courteously at the entrance to the public bridleway at SY 961 841 and continue past the gate to the first stile. From here, follow the new fenceline NE and after 200 yards, start searching the fenceposts for the shrike. From the far end of the fence, a line of gorse goes away from you and on the dead gorse protruding is another favoured hunting post. If not here, the bird can be found in the bushes and Oak trees bordering the Corfe River, particularly where a new ditch is being dug out (eg in the area with the yellow mechanical digger). The bird is typically mobile and wide-ranging.

Nearby, the 7 immature Spoonbills remain at Middlebere, Poole Harbour, with 2 adult Roseate Terns on Brownsea Island and the eclipse drake Hooded Merganser at Radipole Lake RSPB (the latter now favouring the west side of the channel with roosting Tufted Ducks, viewable distantly from the Gurkha Restaurant car park - 40p for half-hour parking). Balearic Shearwaters continue to daily pass Portland Bill, and a Wood Sandpiper is present on the Tip Scrape at Lodmoor NR.

In Orkney, we had a 'new' TWO-BARRED CROSSBILL on Stronsay on 2nd (with just the adult male remaining on Fair Isle and female at Esha Ness Lighthouse) and an eclipse drake AMERICAN WIGEON at Loch of Strathbeg RSPB (Aberdeenshire) (on 2nd-3rd).

A handful of CORY'S and GREAT SHEARWATERS were noted off Cornwall and Scilly at the weekend, with a WILSON'S PETREL identified amongst 250 Storm Petrels from a short pelagic (3rd) and 61 ROSEATE TERNS counted from Long Nanny Burn in Northumberland.

The SHORELARK remains at Spurn Point (East Yorks), with a male RED-BACKED SHRIKE in Richmond Park (Gtr London) on 2nd.

The pair of COMMON CRANES remain at Sleap Moor (Salop), with another two at Welney WWT (Norfolk), whilst in Avon the drake FERRUGINOUS DUCK continues at Chew Valley Lake.

A CASPIAN TERN flew north past Formby Point (Merseyside) at 1355 on 4th.