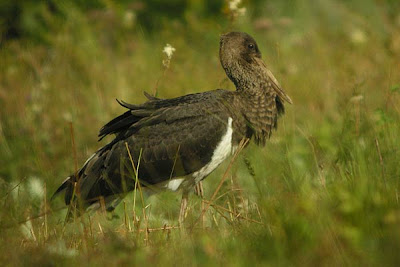 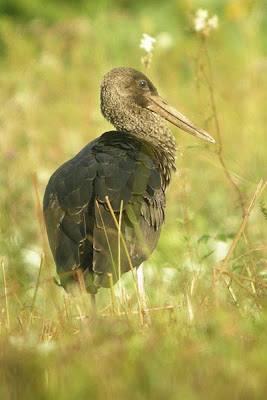 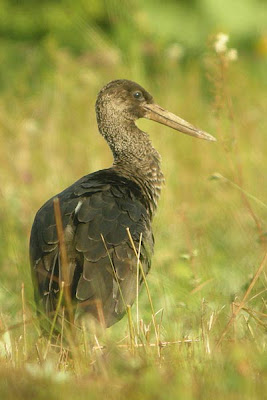 For the past two days, the juvenile BLACK STORK has been performing down to just 45 yards in the allotments and fields just south of Clara Vale, west of Ayton (Co. Durham), particularly the field NW of Building Farm viewed from Stannerford Road. The bird has been widely twitched and photographed - the three fabulous shots above being obtained by Cambrian birder Tristan Reid. The bird has now been in the Northeast of England for at least 12 days. Meanwhile, a WHITE STORK was at Britford Water Meadows (Wilts) yesterday morning.
WHITE-WINGED BLACK TERNS arrived in force yesterday (Monday 11th), with three birds discovered with single moulting adults at Inverness Airport eastern runway (Highland) from 1430-1625, at Loch of Strathbeg RSPB (Aberdeenshire) and on the River Thames off Thamesmead (Greater London). The latter bird, almost in full winter plumage apart from its jet-black underwing-coverts, was still present today, commuting between the north shore mud and the outfall immediately north of Lytham Close and the Thamesview Golf Club and wandering east as far as half a mile. Please note that there is a diversion through Thamesmead North - follow signs to the Golf Club for viewing.
A GREATER SHORT-TOED LARK was a surprise straggler to Tiree (Argyll), with a CATTLE EGRET gracing Cley NWT Reserve (North Norfolk) for much of the day.
TWO-BARRED CROSSBILLS today still included up to 11 at Sumburgh Head (Shetland) (2 adult males, a female and 8 juveniles), 8 juveniles at Buness on Fair Isle and a juvenile on Fetlar at Tresta Beach (Shetland), with a juvenile trapped and ringed at Holland House Garden, North Ronaldsay (Orkney) on 11th.
LONG STAYERS
In terms of wildfowl, the drake LESSER SCAUP continues at Balgray Reservoir (Clyde), the drake FERRUGINOUS DUCK remains at Chew Valley Lake (Avon) and the first-summer drake Hooded Merganser at Radipole Lake RSPB (Dorset), with the moulting adult WHITE-BILLED DIVER still off South Ronaldsay (Orkney) and an adult BUFF-BREASTED SANDPIPER still on North Ronaldsay (Orkney) on 11th, with a large flock of European Golden Plovers.
In Dorset, the female LESSER GREY SHRIKE remains at Hartland Moor, east of Middlebere Heath.
In IRELAND, the first-summer drake KING EIDER remains at Lady's Island Lake (Co. Wexford).
Posted by Lee G R Evans at 23:40