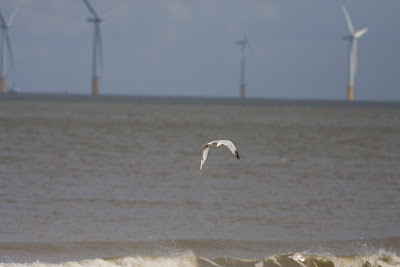 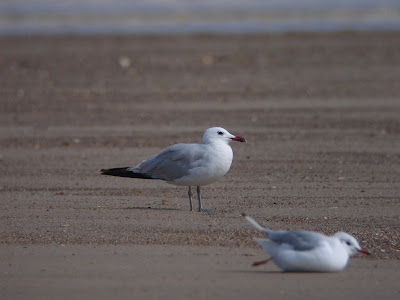 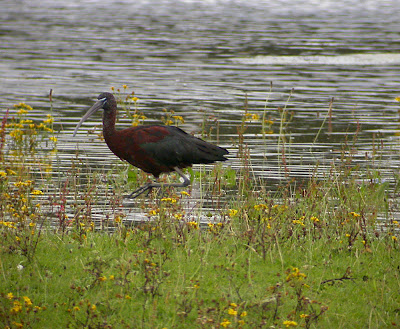 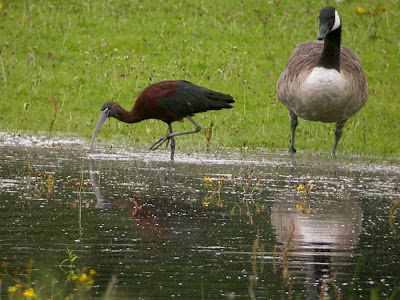 Today's Images (from top to bottom)

An adult AUDOUIN'S GULL, first seen on Friday 15th and the 4th for Britain, reappeared again today on the beach 400 yards north of Wolla Bank Car Park, north of Chapel Point and 2 miles north of Chapel St Leonards at CTF 557 749. It showed well between 1411 and 1630 hours but then flew out to sea. It was also seen several times yesterday afternoon, with local birder Kevin DuRose obtaining the two excellent images published above.

The first Audouin's Gull for Britain was as recently as 2003, when a 2nd-summer remained at Dungeness RSPB Burrowes Pit and Beach (Kent) from 5-7 May (fully documented in British Birds 97: 537-541). This bird was the same as that discovered four days earlier at Neeltje Jans, Zeeland, The Netherlands, where it was also a 'national first' (see Dutch Birding 26: 237-239).

True to form, Dungeness Beach attracted yet another Audouin's Gull in 2007, with a 2nd-summer on the beach for just over 40 minutes on 16 May (see photographs on Dungeness Bird Obsrvatory Website at http://www.dungenessbirdobs.org.uk/lateframe.html), with what may have been the same individual at Seaton Marshes (South Devon) on 14th August (present from mid-morning until 1347 hours and again at dusk roosting in the town).

A spell of South-easterly winds bathing the Northumberland coast northwards yielded a fall of Scandinavian birds, with GREENISH WARBLERS on both North Ronaldsay and Stronsay (both Orkney) and on the Farne Islands (Northumberland), an ICTERINE WARBLER at Windwick, South Ronaldsay (Orkney) and BARRED WARBLERS on Fair Isle, at Hestilly (Orkney), at Girdleness Torry Battery (Aberdeenshire) and on the Farne Islands. A PADDYFIELD WARBLER was trapped and ringed at Skaw Plantation, Whalsay (Shetland) yesterday, with THRUSH NIGHTINGALE and 4 TWO-BARRED CROSSBILLS still present on Fair Isle today. A new male TWO-BARRED CROSSBILL was at Lower Voe, Olna Firth (Shetland) today, with at least 5 still at Sumburgh Head (Shetland). WRYNECKS included singles on Fair Isle, the Farne Islands and at South Gare Bomb Hole (Cleveland), with a MARSH WARBLER on North Ronaldsay and a RED-BACKED SHRIKE at Hauxley NR (Northumberland).

A GLOSSY IBIS is present for its second day at Allerton Bywater, NW of Castleford (West Yorkshire) where it has been feeding amongst Canada Geese on the easternmost pool. From the Victoria Hotel Car Park in the main street, take the footpath to the River Aire and after 50 yards, view from the metal gate.

Strong southwesterly winds in the English Channel resulted in a large displacement of BALEARIC SHEARWATERS, with 31 past Portland Bill (Dorset), 36 past Seaton (South Devon), 82 off Berry Head, Brixham (South Devon) and 27 past Porthgwarra (Cornwall), whilst the latter site yielded 4 GREATS and 3 CORY'S, with 5 further CORY'S off St Mary's (Scilly).

Single CATTLE EGRETS appeared at Dungeness RSPB Boulderwall Farm Fields (Kent) and Ballard Down (Dorset) on 17th, with an adult WILSON'S PHALAROPE at Grindon Lough (Northumberland) from 13th-17th. Two juvenile WHITE STORKS visited Tring Reservoirs and a field being harvested north of Tring Station (Herts) from 1440-1641 on 16th, with a CITRINE WAGTAIL on Fair Isle (16th-17th) and a SPOTTED CRAKE at Oare Marshes (North Kent) from 16th-18th.
Posted by Lee G R Evans at 22:15