Today's Scillonian III pelagic trip was perhaps the worst so far, with only 400+ Storm Petrels, 2 very distant Cory's Shearwaters, 3 Great Shearwaters (the undoubted highlight), 2 Grey Phalaropes and a Sooty Shearwater being observed. Reports of a Wilson's Petrel were erroneous. The sea swell was particularly bad (following a force 8 SW on Saturday) and consequently one birder was seriously injured with a head wound after colliding with the ship's rigging. He had to be taken to St Mary's Hospital on Scilly, and whilst docking to offload him for treatment, several others worse for wear also climbed off! 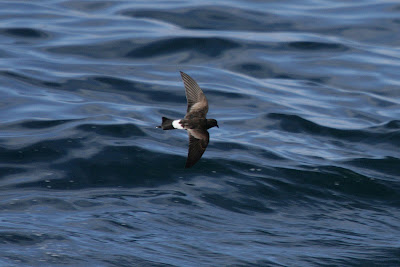 In Northumberland, yesterday's County Durham juvenile BLACK STORK was relocated at 1400 hours a mile south of Throckley and 0.8 miles west of Newburn in the horse field just north of Grange Road 200 yards east of Blayney Row adjacent to the River Tyne (at cNZ 154 655). It remained on view until 2022 hours, delighting 50 or so local observers.

A juvenile KENTISH PLOVER was present with Ringed Plovers on the shingle spit behind Fishtail Lagoon, Keyhaven Marsh (Hants) all afternoon and evening, whilst the female LESSER GREY SHRIKE was again in the field adjacent to the Corfe River with the yellow digger on Hartland Moor, Middlebere (Poole Harbour, Dorset) (at cSY 966 845 (see Jeff Hazell's superb image below). A CATTLE EGRET was in Poole Harbour briefly at Ower Causeway. 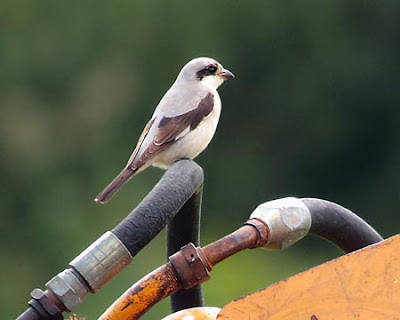 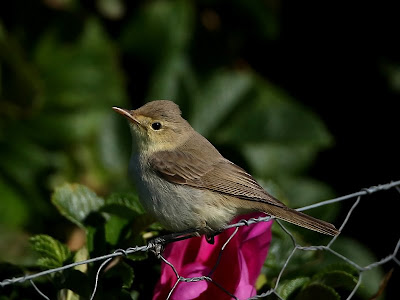 On Shetland, the MELODIOUS WARBLER remains in bushes close to Sumburgh Head Lighthouse (Jim Nicolson obtained the excellent image published above) with just 2 TWO-BARRED CROSSBILLS remaining but another at Saxa Vord. On Orkney, the WHITE-BILLED DIVER continues on South Ronaldsay between St Margaret's Hope pier and Churchill Barrier No.4, with a juvenile CITRINE WAGTAIL showing well SE of Loch of Stenness in a small ditch at HY 310 116 (Eric Meek et al).