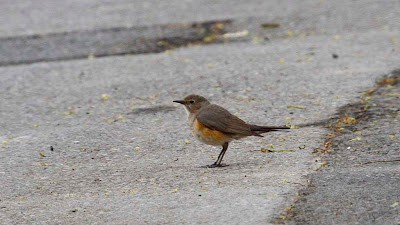 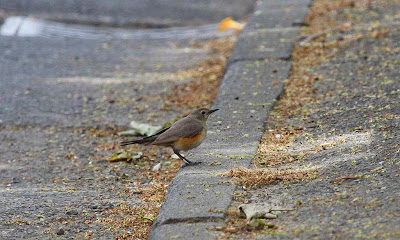 White-throated Robin running the gauntlett of the highway (Steve Clifton)
In Cleveland, the first-summer WHITE-THROATED ROBIN trapped and ringed at Hartlepool Headland yesterday morning remains for a second day. Unlike Monday when it repeatedly visited the inner bowling green by Olive Street, today it restricted its movements predominantly to the flowerbeds and shrubs of the Doctor's Garden in Durham Street. The garden is generally strictly private and out-of-bounds but thanks to the generosity of Dr Reece and his associates, it was opened up today for allcomers.

The bird showed intermittently throughout the day, often at just yards range, posing in bright sunshine on the compost heap and parading about the lawn. Thus far, some 1,700 visitors have enjoyed this spectacle, this waif constituting the third of its kind ever to have made landfall in the British Isles.

DIRECTIONS: The Headland is well signposted from the town centre and ring road and Durham Street and its environs are just 300 yards shy of the extreme far end of the peninsula. Please park sensibly and courteously in the side streets and official car parks. Access to the Doctor's Garden was sanctioned for TODAY only and is not accessible on Wednesday.

Away from Cleveland where incidentally the migrant RED-BACKED SHRIKES all departed overnight, most vagrant action is on Shetland today, where perhaps one may expect it during the first week of June. Most exceptional is a SQUACCO HERON at Urafirth, favouring roadside pools at HU 300 787 (present for second day) and a singing male GREAT REED WARBLER in gardens opposite Vidlin Plantation, with the singing male EASTERN SUBALPINE WARBLER still frequenting the southern end of Kergord Plantation and the usual adult LONG-TAILED SKUA at East Burra, NW of the Mill Pond. A few COMMON ROSEFINCHES are to be found, with a male at Scatness

Not far away on Orkney, North Ronaldsay hosted both BLYTH'S REED and MARSH WARBLER today (the former trapped and ringed), as well as a lingering TAIGA BEAN GOOSE, with a breeding-plumaged WHITE-BILLED DIVER off Evie (in the Broch of Gurness). whilst on Mainland Scotland, the PIED AVOCET remains at Skinflats Lagoon North Pool (Forth), the GREAT WHITE EGRET at Loch of Kinnordy RSPB (Angus/Dundee) and the adult drake SURF SCOTER offshore of Musselburgh Lagoons (Lothian)

In Lincolnshire, the juvenile WHITE-TAILED SEA EAGLE refuses to leave Ruckland, preferring to take carrion food being purposefully placed out for it rather than return to Continental Europe, whilst a first-summer COMMON CRANE showed well in set-aside at Saxby All Saints Carrs, east of the New River at Ancholme, viewed from the bridge at SE 975 167.

The BLACK-THROATED DIVER is still to be seen from the Sheepwash Hide at Carsington Water (Derbyshire) today, whilst relatively close to was a RED-RUMPED SWALLOW over Ogston Reservoir west bank car park for a short while this morning. Further north and west in Cheshire, a PECTORAL SANDPIPER remains on No.2 Pool at Inner Marsh Farm RSPB, whilst further north still, a first-summer COMMON CRANE was at White Moss, near Stocks Reservoir (Lancs)

The ROSEATE TERN is still at Minsmere RSPB (Suffolk) (favouring the main scrape) as is the reedbed-loving PURPLE HERON, whilst elsewhere in East Anglia, WOOD SANDPIPER at Cley NWT is perhaps the highlight.

A female GOLDEN ORIOLE was seen briefly at Farley Mount Country Park (Hampshire) (SU 403 290) this afternoon, whilst of interest was Jersey's first singing male CIRL BUNTING for seven years - a species once resident on the island

Little in the way of news coming out of IRELAND this week although the regularly returning adult FORSTER'S TERN is at Tacumshin (Co. Wexford) and an adult RING-BILLED GULL at Gortnor Abbey Pier, Crossmolina (Co. Mayo)
Posted by Lee G R Evans at 22:43