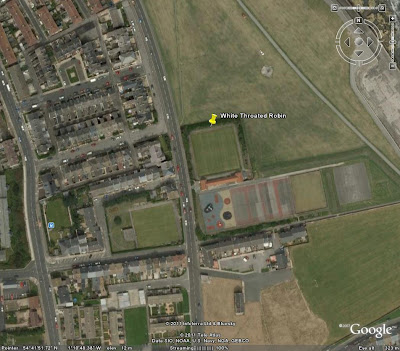 The yellow pin marks the location of the Bowling Green at Hartlepool Headland. The inner bowling green is that on the opposite side of the road with the green sward to the left the Doctor's Garden 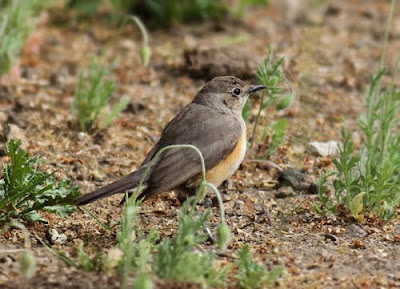 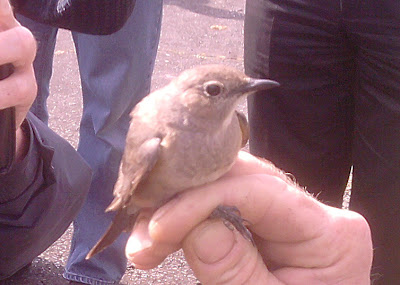 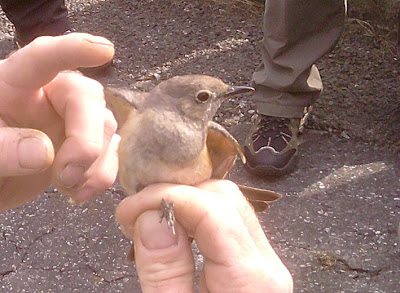 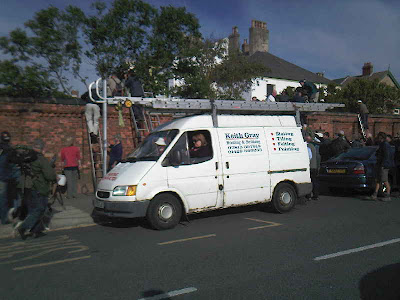 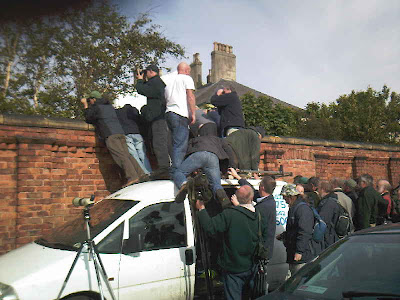 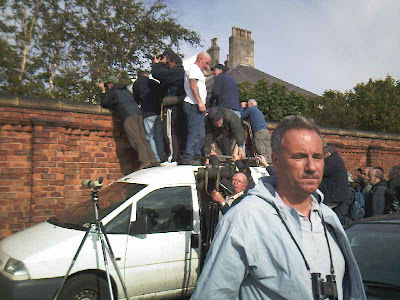 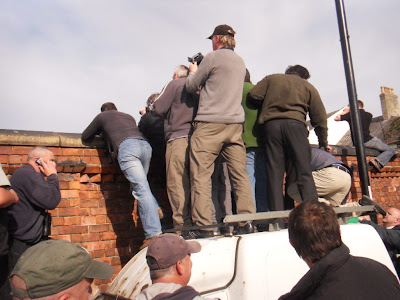 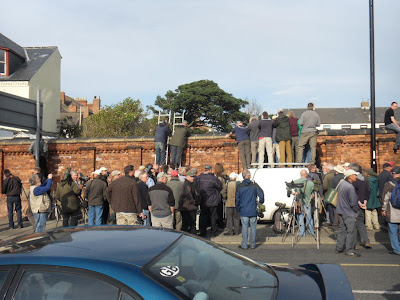 These two images were taken by Snowcap, showing one of the vans utilised and a few of the ladders used to scale the wall.

Hartlepool Headland birder and ringer Chris Brown stumbled on what he thought was a Red-flanked Bluetail in his mistnet as he set up ringing in the allotment field adjacent to the Doctors Garden early yesterday morning, after heavy rain and a Northeasterly wind overnight. The bird was carefully placed in a small bag and then taken off to the Ringing room for processing and at the same time, birders on the local grapevine were alerted.

Upon examination however, it soon became apparent that this was no bluetail but the UK's only third WHITE-THROATED ROBIN - an absolute mega and a species very few birders indeed had ever seen in this country. A correction was instantaneously sent out and by 0900 hours, this remarkable news was broadcast nationally.

Once the bird had been weighed, measured, photographed and ringed, it was released at the neighbouring bowling green, where, for the next three hours, it showed well feeding on the ground, allowing the first 400 or more twitchers to connect. It kept returning to the grass and flower gardens by the green and appeared to be fairly unconcerned by the crowds gathering. Throughout this period, the sun shone brightly on the green.

By early afternoon, the bird was becoming more skittish and visiting the green much less frequently. It flitted in and out for just minutes at a time and repeatedly returned to the Doctor's Garden adjacent. By mid afternoon, cloud cover moved in and it became quite cold for a while - the bird of course disappearing after its last brief showing at 1510 hours. This meant that those from farther afield were in trouble - and as the minutes turned into hours, the stress on some individual's faces was clearly apparent.

LGRE eventually tracked down local ringer Chris Brown and he very kindly agreed to do a sweep of the private church allotment for the bird, as well as view the inaccessible Doctor's Garden from some gaps in the fence. By 1730 hours, Chris could find no trace of the bird and at this point, many birders moved out and attempted to explore the Croft gardens and other suitable areas where the bird may have moved to.

In the meantime, one intrepid local birder decided to use his van as a tool to viewing the Doctor's Garden itself, a garden protected by a 10-foot concrete fortified wall ! Glancing along the flower beds, he suddenly came across the bird - enjoying the sunshine that was now shining down on this area only. Franko happened to be passing by at the time and quickly clambered up on to the van to join the Middlesbrough birder. Within minutes, news had spread of the relocation and what followed next was quite exceptional.....

The Doctor's Garden is surrounded on all sides by high fences and ten foot concrete wall and cannot be viewed from outside oridnarily. Access was out of the question and had already been negotiated without success much earlier in the day. Although 10 or so birders scrambled up on to the initial van to view, it was clear that there was going to be a major problem in getting the well over 500 people present on to the bird. Fortunately, the robin was more than happy where it was and was enjoying the sunshine so much that it actually shaped itself a 'cup' out in the soil and sat down in it. Within minutes, two other enterprising van drivers had driven up and were offering their van roofs as options for looking over the wall and then the steel ladders began arriving !

Within an hour, no less than nine ladders were being propped up against the wall and long queues formed behind them as birders took their turn. This was a unique twitch and one where such improvising techniques had been used before. With the evening sun beating down on the garden for the next few hours, the robin kept performing - allowing many the opportunity of seeing this lost waif.

The bird was either a female or a first-summer, with a full gorget across the breast and some apparent flecking on the forecrown. The long tail was uniform and black, with striking orange flanks, lighter orange on the undertail coverts, quite bluish-grey upperparts, diffuse pale throat and hint of a submoustachial stripe and a bold pale eye-ring.

A thread on Birdforum relating to the bird has some excellent links to videos of the twitch, whilst there are many images of the actual bird itself. A few of these are reproduced above

The bird remains present today (Tuesday), still covering very much the same terrain as yesterday. The headland is well signposted from the Hartlepool ring road, with the Bowling Green situated on the seaward side not far from the furthest tip of the head. Please park sensibly.
Posted by Lee G R Evans at 11:31