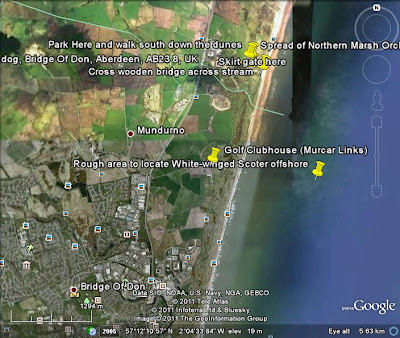 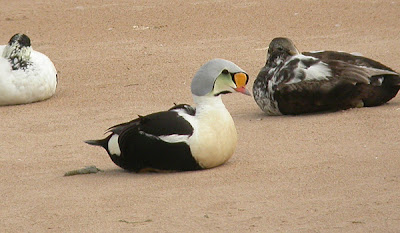 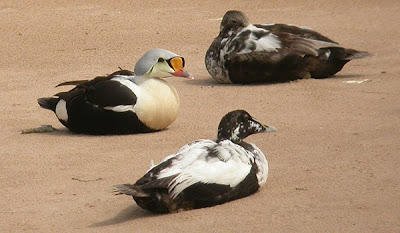 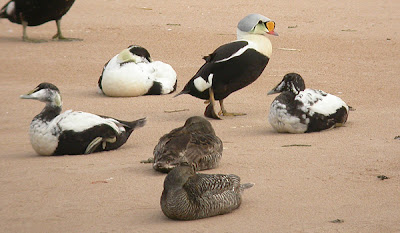 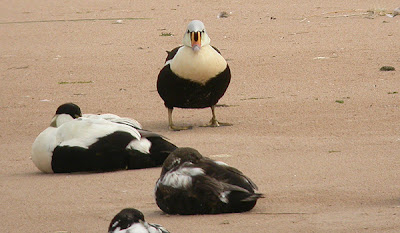 Nearby, the drake KING EIDER remains on the Ythan Estuary, generally roosting on the duneslack opposite Inches Point or the Golf Links (see Darren Robson's superb image above).

Over in the west of Scotland, a drake AMERICAN BLACK DUCK is in residence with Mallards at Sunart Loch, 4 miles west of Strontian and visible from the hide at Garbh Eilean on the north shoreline (Highland Region) (accessed from the A861), whilst much further north at the extremities of Shetland on Unst, a GREATER SHORT-TOED LARK was at Lamba Ness on 21st.

The first-summer male RED-FOOTED FALCON continues a long sojourn in East Norfolk, commuting between the Hickling Reserve and the Nelson's Head track at Horsey, whilst on the Isles of Scilly, a single EUROPEAN BEE-EATER remains on St Agnes in fields below the Parsonage.

ROSE-COLOURED STARLINGS are a regular feature of June and this week has seen the presence of a beautiful male in gardens 3 miles NNW of Barnstaple (North Devon) on the west side of Kingsheanton on the feeder in the front garden of 'The Old Barn House'. Park near the 'Ring O' Bells' public house then walk NE before bearing left (SS 551 372). COMMON ROSEFINCHES too frequently turn up with an immature male yesterday in Northumberland near Druridge Country Park and another at Beacon Lane, Kilnsea (East Yorks).

In what has been the most productive years for many for RED-NECKED PHALAROPES in England, today has seen the arrival of a breeding-plumaged female at Slimbridge WWT (Gloucs), where it is showing well from the Zeiss Hide.

In Suffolk, up to 7 Spoonbills have been visiting the main reserve scrape at Minsmere RSPB, where an elusive female FERRUGINOUS DUCK is also present at Island Mere.

The long-staying GREAT WHITE EGRET remains at Denge Marsh, Dungeness RSPB (Kent), with the female BLUE-WINGED TEAL still to be found at Chew Valley Lake (Avon) at Hollow Brook from the Fishermen's Car Park. In much the same vein, the BONAPARTE'S GULL remains on the River Exe at Mudbank Lane, Exmouth (South Devon).

Whilst many of our COMMON CRANES are breeding, loafing first-summers include singles at Nosterfield (North Yorks) east of Lingham Lake in fields viewable from the tarmac road at Ladybridge Farm (SE 290 807) and at Saxby All Saints Carrs (Lincs) in setaside east of the New River Ancholme viewed NE from Saxby All Saints Bridge (SE 975 167).

Not much to report at the Summer Solstice in IRELAND apart from an adult RING-BILLED GULL at Ballycastle Harbour (County Antrim)
Posted by Lee G R Evans at 12:37