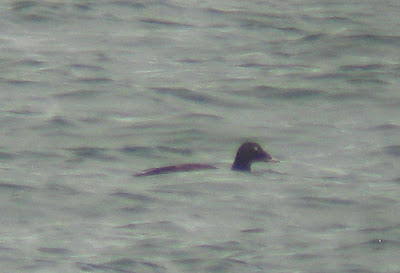 Martin Collinson did exceptionally well last night getting these images of the Blackdog White-winged Scoter - clearly shows the well-defined head shape and bill and bill colour.
I spent the day at Blackdog/Murcar Beach yesterday and can confirm that this is a very difficult bird to twitch and to eventually see - there are a number of first-year Velvet Scoter lookalikes which have been causing immense problems.

It was first seen shortly after dawn yesterday morning and then not again until Chris Heard relocated it just after 0750 hours. I managed to get on to it briefly, as did two other observers, but then we lost it again. It then took the best part of three hours to locate - Adrian Kettle, Graham Ekins, Colin Mackenzie-Grieve and Andy Field stumbling on to it as they walked north along the beach at 1015 hours. Frustratingly, news was slow in spreading, and when eventually the 80 or so birders at the black pole end got to know, we managed just eight minutes of tail-end viewing before we lost it in the scoter flock.

It was then not seen again until 1633 hours, when on a receding tiide, the entire flock of scoter had flown back in from deep water roosting and were again busily feeding - at a reasonable range. It took an age though to relocate (almost two hours) and was later seen with Common Eider before attaching itself for a short time to a raft of 6 Velvet Scoter. At best, it came to within 450 yards offshore but was always very distant.

We are talking very big numbers of scoter here - upwards of 1,200 Commons, just over 90 Velvets and 3-4 Surf Scoters - as well as over 2,000 Common Eiders - and if the light conditions are rhe same as when I was there - bright sunshine and hazy - this is a very difficult identification indeed. Added to that, there are at least 11 first-year Velvet Scoters present in the flock and it is these that are causing a major identification headache. With 140 birders present yesterday, it was a major challenge to say the least.

You must make sure you get on to the right bird. The American White-winged Scoter is only subtly different to the first-summer Velvets. It is about the same size as Velvets, perhaps marginally longer in the body, but distinctly, has very obvious contrasting brown flanks, with darker, more black upperparts (the Velvets are similar but less contrasty). The head and bill shape are unusual in that the head is held forward and there is this 'two step effect', with the slight protrusion on the bill and the heavy feathering extending further down. The bill, at distance, always appeared greyish (perhaps greyish-pink at closer range) wheareas all of the younger Velvets were markedly yellow or occasionally bright pink in certain lights. The white wing bar did not seem as obvious as that on the Velvet Scoters and when flapping, it was seen to be in heavy moult (perhaps the reason). The key feature though, in both poor and good light conditions, was the shape of the head combined with the bill profile - and it must be remembered that this is the key feature separating this bird from a Stejneger's Scoter.
Many people yesterday were caught out by very similar-looking Velvet Scoters and if you are going to make such a long pilgrimage, make sure to print off the images of the bird beforehand and get on to the right bird.

DIRECTIONS
Just to reiterate, take the Blackrock turning from the A90 dual carriageway north of Aberdeen, drive to the end of the narrow lane and park after 400 yards either in the designated car park or on the grass verge (making sure to avoid the nice spread of Northern Marsh Orchids). Walk down through the yard to the bridge across the stream and then continue south down the dunes for up to 1.25 miles to view offshore (in the vicinity of the single black pole or up to 500 yards further south)
Posted by Lee G R Evans at 16:15