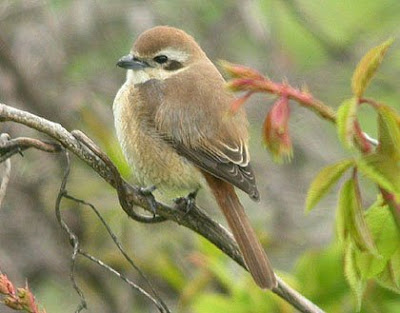 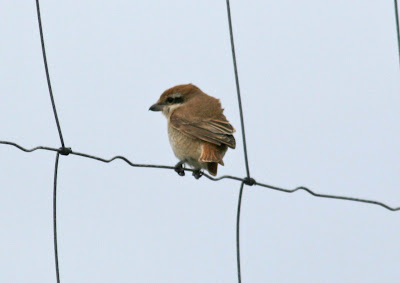 Comparing these two images has made me question again the identification of yesterday's Turkestan Shrike on North Uist.
The top picture is that of a female Brown Shrike photographed in Korea in May, whilst that below is Paul Boyer's image of the Uist bird repeated.
If you click on Paul's image, it will magnify and in doing so, you will find that the very short P2 will equal P6. This fits Brown Shrike rather than Turkestan.
Furthermore, Lars Svensson very kindly emailed me the following today
''Dear Lee,

I trust you saw my quick reply earlier today. The bird is a 99% safe Brown Shrike, not an Isabelline. I have looked again at the two photographs and can add also these three characters pointing the Brown Shrike way: (i) narrow tail-feathers, (ii) not a trace of a pale primary patch near primary-coverts, which a young male Isabelline would show in vast majority of cases, and (iii) extensive and strong scalloping of underparts, which is good for Brown but of course shared by a minority of the most marked Isabelline.
But safest Brown Character is that all (at any case longest two) tertials have solidly dark centres with strongly contrasting pale edges. A young Isabelline would have a pattern more like in young Red-backed, with some pale irregular pattern also inside dark subterminal margins. The prominent supercilium in combination with dark 'mask' further supports the identification.