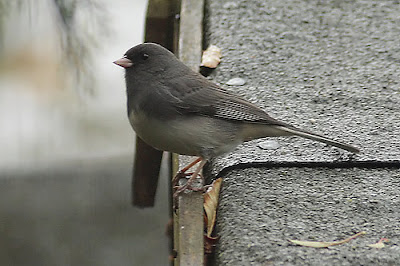 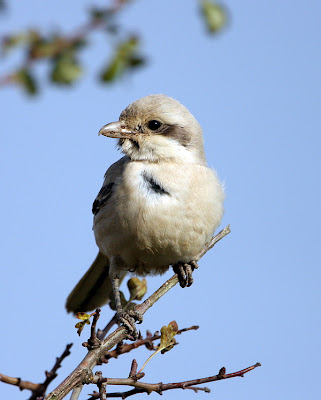 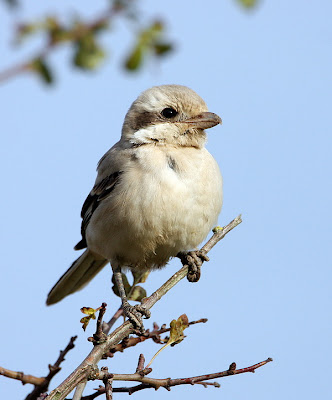 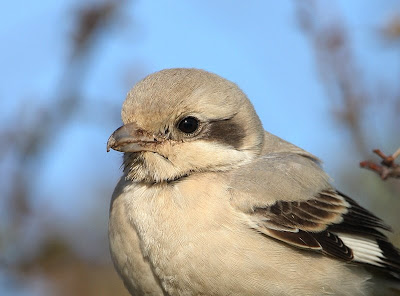 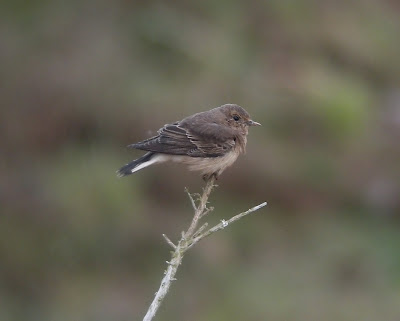 This is the British Birding Association and UK400 Club Rare Bird Alert for Sunday 16 November 2008, issued at 1900 hours and published in association with Rare Bird Alert Pagers and utilising additional information from the Regional Birdlines, BirdGuides, local email groups and websites and individual observers.

Bird of the day was a stunning male SLATE-COLOURED JUNCO in the back garden of Steve Turville's parent's garden in East Coker (Somerset) at ST 536 130 - at 25 Mill Close (per Tim Farr). Although elusive, it showed well several times this afternoon in the Leylandill hedgerow alongside the house, as well as on the shed roof, where the family have very considerately placed some seed there to encourage the bird to feed out in the open. The bird was seen by about 30 local observers before dusk and photographed by James Packer. PLEASE PARK SENSIBLY AND COURTEOUSLY IN THE HOUSING ESTATE AND DO NOT BLOCK DRIVES. RESPECT ALL PRIVACY OF RESIDENTS AND DO NOT VISIT BEFORE 0800 HOURS. It represents the second Somerset record.

In North Yorkshire, the beautiful male TWO-BARRED CROSSBILL continues to visit the two peanut feeders at Garfit Farm in Bilsdale (North Yorkshire Moors), showing well at regular intervals and fighting for its place at the feeder with Coal, Great and Blue Tits. Park sensibly and courteously at the side of the B1257 and walk the 0.75 mile access road uphill to the farm.

An elusive female SARDINIAN WARBLER is in the first bushes beyond the car park left of the main track at Berry Head, Brixham (South Devon), with a RICHARD'S PIPIT at Porthgwarra (Cornwall).

The first twitchable ROUGH-LEGGED BUZZARD in 34 years for Hertfordshire involves a juvenile for its second day in Red-legged Partridge shooting fields just north of Reed village, 2 miles south of Royston. The bird is favouring the game crop to the west of the A10 at TL 355 274 and can be viewed from the track to Hatchpen, 200 yards along the road towards Barkdale. Park sensibly on the verge just before the Hatchpen entrance and walk down the lane 500 yards to view. A juvenile Hen Harrier is also in the vicinity, as well as Red Kite, Peregrine and several Common Buzzards.

In Cambridgeshire, a juvenile AMERICAN GOLDEN PLOVER is present for a third day amongst 832 European Golden Plovers on the sludge lagoon pools at Barleycraft GP, whilst another was identified in Hamford Water (Essex) early afternoon only, in fields inland of the sea wall west of Beaumont Quay.

An adult drake SURF SCOTER was a superb find by Maurice Jones in Lancashire this morning, offshore at Starr Gate, Blackpool, from 0950-1125 hours with 3 Velvet Scoters. It flew off north.

A first-year unringed WHITE STORK is present for a third day in flooded fields on the south side of Glascoe Dubh (SC 447 989) on the Isle of Man and may well have been the bird seen last week (Monday) NE of Fort Augustus at Gorthleck over Loch Mhor (Highland).

A GREY PHALAROPE remains for a 4th day on the Rick Pond at Hampton Court Pond (London), showing extremely well to allcomers (park in Church Grove and walk 800 metres to the pond at TQ 172 680), whilst at the east end of London, 4 first-winter EUROPEAN SERINS, 2 Dartford Warblers, 2 Water Pipits and at least 7 Scandinavian Rock Pipits remain at Rainham Marshes RSPB. In Ayrshire, the GREY PHALAROPE remains off Stevenston Point.

A BLACK GUILLEMOT was off Cley Coastguards and Blakeney Point Halfway House (North Norfolk) this morning (presumably the first-winter which has been offshore in the area all autumn).

In terms of wildfowl, BLACK BRANTS are at Titchwell Marsh RSPB (Norfolk) and Ferrybridge, Portland Harbour (Dorset) (2), whilst the regular adult RED-BREASTED GOOSE is again with Dark-bellied Brent Geese on Butts Lagoon, Pennington Marshes (Hants). The 2nd-winter drake KING EIDER remains off Appledore (North Devon). The adult drake LESSER SCAUP continues with Tufted Ducks on the A52 Pit/Blotts Pit at Holme Pierrpont (Notts), with a 'new' first-winter drake NE of Harbour Road and south of the railway at Lydney Lakes (Gloucs) and an adult female on Helston Boating Lake (Cornwall). A drake FERRUGINOUS DUCK is present for a second day at Cosmeston Lakes CP on the West Lake (Glamorgan) whilst the long-staying drake American Green-winged Teal remains at Capringstone Flash (Ayrshire). The drake Hooded Merganser in all its splendour continues to delight admirers at Radipole Lake RSPB (Dorset), with an adult female SURF SCOTER off the Langstone Rock at Dawlish Warren NNR (South Devon). A further female SURF SCOTER is at Hough Bay, Tiree (Argyll), the same island hosting a drake RING-NECKED DUCK on Loch Bhasapol. The female RING-NECKED DUCK remains on the Great Broad at Whitlingham CP, Norwich (Norfolk), with the regular drake at Foxcote Reservoir (North Bucks).

An adult RING-BILLED GULL is at Carsington Water (Derbyshire), with the regular bird at Walpole Park Lake/Haslar Creek, Gosport (Hants), with the 2nd-winter still at Lamby Lake (Glamorgan) (ST 217 784). The long-staying 2nd-winter Glaucous Gull was again at Donna Nook (Lincs) with a 2nd-winter KUMLIEN'S GULL at Skateraw (Lothian) on 15th.

A HUME'S LEAF WARBLER was present at the Loch of Strathbeg RSPB (Aberdeenshire) yesterday, as was the first BLUE-WINGED TEAL of the year in Britain - an adult drake at Back Saltholme Pool (Cleveland). The latter site also yielded a CATTLE EGRET on 14-15. A SIBERIAN CHIFFCHAFF is in Sallows and scrub behind the Water Lane Sports Centre in Lowestoft (Suffolk)