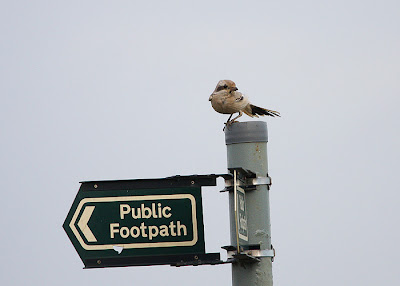 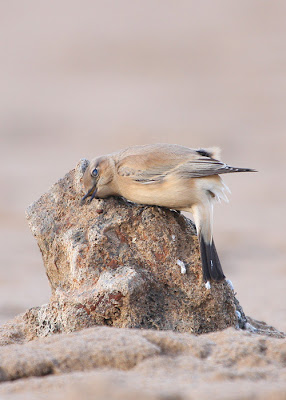 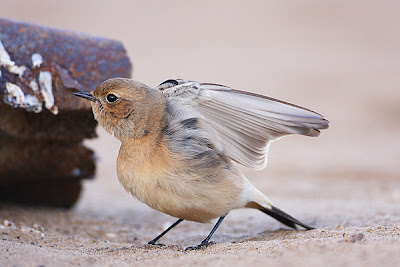 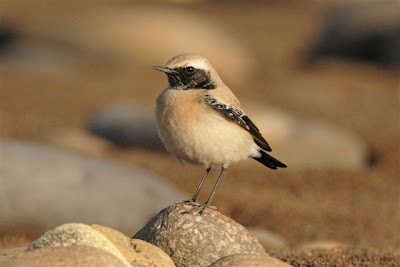 SAXAUL GREY SHRIKE (Rob Laughton) and DESERT WHEATEARS photographed at Saltfleet Haven (Rob Laughton) and Newbiggin (www.tomtamsbirdimages.co.uk)
On the Isles of Scilly, the first-winter SNOWY OWL reappeared today, favouring the desolate Porthminnick and Giant's Castle area of St Mary's, whilst in South Devon, a female SARDINIAN WARBLER was seen twice at Berry Head, Brixham, on 12th (Mike Langman et al). Quite surprisingly, the latter is a massive Devon blocker and was seen by just 17 birders all told. It also coincided with the first twitchable Devon Barred Warbler in six years. A first-winter male DESERT WHEATEAR was an excellent record at Instow (North Devon) on 11th November.

The beautiful male TWO-BARRED CROSSBILL continues to visit the two peanut feeders either side of Garfit Farm in Bilsdale (North Yorkshire Moors), showing up for up to 25 minutes at a time at least twice a day. Park sensibly on the verge on the west side of the B1257 and walk the 0.75 miles uphill along the entrance to the farm. Parking is limited at the farm and should only be used by the infirm or elderly.

At Rainham Marsh RSPB Reserve (London), up to 7 EUROPEAN SERINS are now being seen, including an adult male and 6 first-winters. One is regularly visiting the feeders by the Information Centre, with the others on embankment weeds just under a mile west of the centre. A single TWITE is also still with the mobile Linnet flock (Howard Vaughan, et al). A late Curlew Sandpiper also visited the reserve today, visiting Aveley Pools.

The juvenile AMERICAN GOLDEN PLOVER was again with 2,000+ European Golden Plovers SE of East Harling (Norfolk) and north of the Lopham road in fields by Flint Hill Farm

TUNDRA BEAN GEESE have been arriving in reasonable numbers, with 10 in East Kent at the weekend followed by two adults at Belvide Reservoir (Staffs) (still present today) and a party of four at Cainhoe Lakes, Clophill (Beds).

A CATTLE EGRET flew NW over Sunk Island, adjacent to the River Humber (East Yorks), at 1030 hours, with another in flooded fields adjacent to Church Road, Ulswick (Cumbria) until late afternoon (it roosted in trees at Urswick Tarn). View from the eastern side of the tarn at SD 270 774.

A female Ring-necked Duck remains for a third day on Whitlingham GP Great Broad, Norwich (Norfolk), whilst the only Smew in the country (a redhead) was at Tophill Low 'O' Reservoir (East Yorks). The 2nd-winter drake KING EIDER remains at Appledore (North Devon), with a first-winter drake off Hartlepool Headland (Cleveland) on 12th., whilst a very confiding female LESSER SCAUP remains on Helston Boating Lake (Cornwall).

A juvenile ROSE-COLOURED STARLING is present in Newquay (Cornwall), favouring gardens in Penhallow Road at SW 832 621 (please respect the privacy of residents)

After the huge excitement of the autumn, birding in IRELAND has largely quietened down, with a juvenile AMERICAN GOLDEN PLOVER at Omey Strand (Co. Galway) and two juvenile SURF SCOTERS off Doonbeg Beach (Co. Clare).
Posted by Lee G R Evans at 21:09