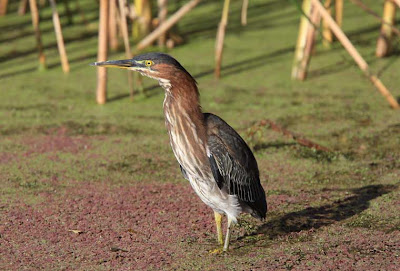 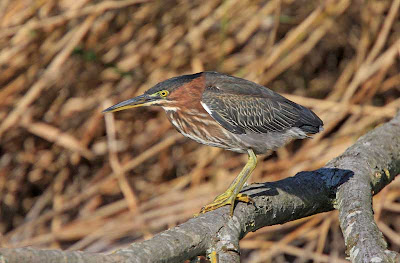 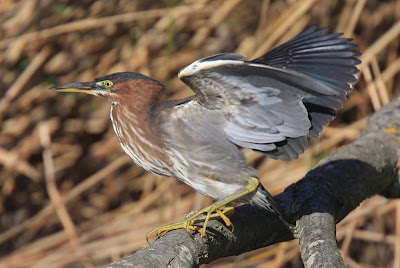 With a brisk Northeasterly wind blowing, East Anglia and Yorkshire took the full brunt of new arrivals today, with a first-winter RED-FLANKED BLUETAIL showing on and off at Gramborough Hill (Norfolk) at the lower edge of the east side of Weybourne Camp until mid-afternoon, a BLACK-THROATED THRUSH on view for an hour mid-afternoon in fields between Home and Thornham (Norfolk) (park at Orchard Farmhouse car park, walk 130 yards north on footpath and turn left to view the second field with hay bales) and an OLIVE-BACKED PIPIT beneath the pines just north of Holme NOA (Norfolk) late afternoon. There was also a fall of PALLAS'S LEAF WARBLERS, with 2 at Holme NWT (one trapped & ringed), 3 in Wells Woods (2 near the Toilet Block and another by the Drinking Pool), 2 at the north end of Cley East Bank and further singles in Great Yarmouth Caister Road Cemetery, at Warham Greens and at Sea Palling. Meanwhile, the moulting adult AMERICAN GOLDEN PLOVER and DOTTEREL remained with 500+ European Golden Plovers on East Harling Heath, east of the B111 (VIEW PREFERABLY FROM A VEHICLE ONLY TO AVOID DISTURBANCE). Five SHORELARKS flew south over Landguard NR (Suffolk).

In East Kent, the first-winter AMERICAN GREEN-BACKED HERON continues to show extremely well, taking regular small Perch from the dammed section of the Royal Military Canal, 450 yards west of the main car park in West Hythe village. Leave Junction 11 of the M20 and follow signs for Hythe. Just before the town, turn right on to the very minor road and after half a mile, turn left at the crossroads and continue down Lympne Hill to the car park. DO NOT PURPOSEFULLY FLUSH THE BIRD and be respectful to other birdwatchers and members of society at the site.

Also in East Kent, a first-winter SIBERIAN STONECHAT remains for a 2nd day at the Gun Emplacement, 400 yards west of Bockhill Farm Wood at St Margaret's-at-Cliffe.

On the Isles of Scilly, the first-year SNOWY OWL continues to show well on St Martin's (in the Great Bay east of Plains Cottages), with two different GREY-CHEEKED THRUSHES on St Mary's (a new bird found today by Bordeaux Pottery at the base of Airport Road and the long-staying bird on Porthmellon Beach - now much more confiding). On St Agnes, the juvenile WHITE-RUMPED SANDPIPER remains on the Gugh Bar, a RED-THROATED PIPIT flew over Porth Killier, with a SPOTTED CRAKE on the Big Pool at dusk. Nearby, the first-winter male BLUETHROAT continues to show at intermittent times at Land's End (Cornwall) (in Sallows just south of the car park)

Large numbers of BOHEMIAN WAXWINGS continue to arrive, with 20+ on Shetland, 40 on Orkney (in Stromness), 19 on the Outer Hebrides, 42 on the island of Skye (at Isleornsay), 12 in Aberdeenshire, 1 in Boat of Garten (Speyside), 10+ in Edinburgh (Lothian), with further south, 21 in Cumbria (over Brampton), 20+ in Yorkshire and smaller numbers in Lincolnshire and Norfolk.

Scotland's record-breaking 'wreck' of GREY PHALAROPES continues, with 3 off Hamars Ness, Fetlar (Shetland), 2 off Sladar, Lewis (OH), 108+ on Skye (at the northern end of Gedintailor at NG 533 358), 3 off Fraserburgh (Aberdeenshire) (off the Lighthouse Museum Car Park),whilst in England, a very confiding bird remains on Farmoor 2 Reservoir (Oxfordshire) with coastal birds off St Mary's Island (Northumberland), Saltburn (Cleveland), and off Newbiggin Point (Northumberland) (2).

In terms of wildfowl, two Black Brants remaine on The Fleet between Camp Road and the Rifle Range at Wyke Regis (Dorset), an adult white morph SNOW GOOSE is with Greylag Geese in fields just SW of Hestily, Windwick (on South Ronaldsay on Orkney), American Green-winged Teals were at Mersehead RSPB (Galloway) and Farlington Marshes (Hants), the adult drake LESSER SCAUP remains on the A52 Pit at Holme Pierrpont (Notts) (view from the gateway just east of the Garnston Roundabout) and the 2nd-winter drake KING EIDER off Appledore (North Devon) (between the Lifeboat Station and Church Fields Car Park).

In Fife, the first-winter or female Hooded Merganser of unknown origin reappeared on Tayport Pond today (after being first seen here four days ago) (at NO 462 285) but flew off east at 1500 hours (reports of this bird being elsewhere in the week were erroneous, whilst Fife Wildlife Park confirm that it is definitely not from there)

The RING-BILLED GULL (now in its 2nd-winter plumage) has returned to Lamby Lake, SE of the roundabout in Lamby (East Glamorgan), with the regular adults at Walpole Park lake, Gosport (Hants) and Westcliff-on-Sea (Essex).

At least 3 of the 5 EUROPEAN SERINS are still present at Rainham Marsh RSPB (London), frequenting the vegetated bank 1.2 kms west of the Information Centre

Whooper Swans continue to flight in from Iceland, with small parties appearing, some on route to Welney WWT (Norfolk), including 2 at Doxey Marshes (Staffs), 5 over Coney Meadow, Ferry Meadows CP (Cambs) this morning and 7 still on Drift Reservoir (Cornwall).

A surprising number of late Ospreys are lingering this year, with singles in Northamptonshire, Hertfordshire and Hampshire, whilst it is also an excellent autumn for Short-eared Owls, with larger numbers than usual.

Firecrests are particularly abundant on the East Coast at present, with up to 20 in the Margate area (Kent), 3 at Sandwich Bay (Kent), several at Dungeness (Kent) and numerous birds north to Kessingland (Suffolk).

On 30th October, a presumed adult drake CANVASBACK was with 20 Northern Pochards at Nosterfield Quarry Lakes (North Yorks) from early afternoon until dusk but was not seen today.

In IRELAND, a CATTLE EGRET remains at Inchydoney (Co. Cork) (at Beamish's Pool), with adult Ring-billed Gulls at Timoleague (Co. Cork) and Nimmo's Pier, Galway Harbour (Co. Galway) and a first-winter Grey Phalarope at Nimmo's Pier. The bird of the day however was a BLYTH'S REED WARBLER at Mizen Head (Co. Cork).
Posted by Lee G R Evans at 00:09