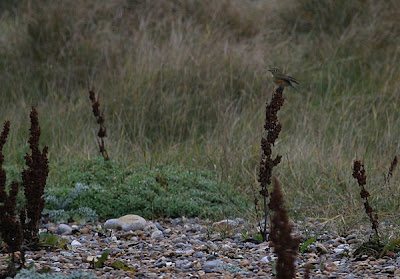 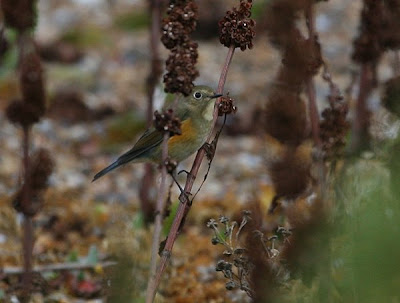 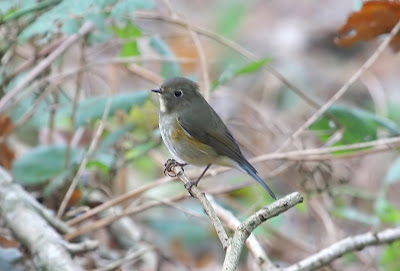 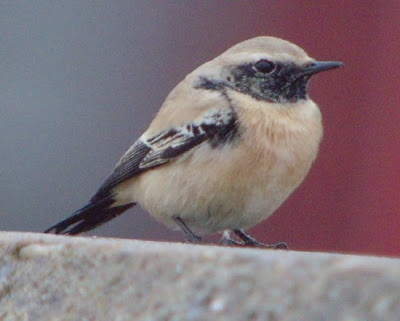 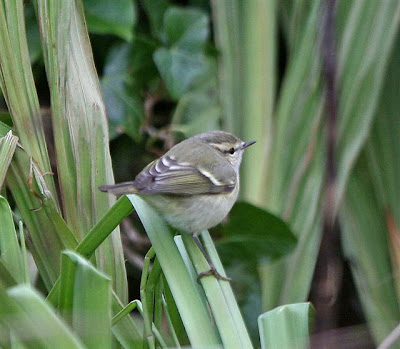 Today saw yet another haul of 'Eastern Surprises' - with RED-FLANKED BLUETAILS now almost as common as European Robins !

Today's RED-FLANKED BLUETAIL was on Holy Island (Northumberland), where it favoured the Vicar's Garden throughout the day, often showing well. Although there was no sign of yesterday's Bluetail on Blakeney Point (Norfolk), that location today yielded a RADDE'S WARBLER at Halfway House. A further RADDE'S WARBLER was in short grass between the clifftop path and Plantation at the north end of Easington Gas Terminal (East Yorks), with yet another in scrub on the north side of Castle Hill, Scarborough (North Yorks) - all very late dates for this Siberian species.

Pride of place however was taken by a first-winter SAXAUL GREY SHRIKE (only the 19th British record and the first since a first-summer male on the Isle of Man in June-July 2003) showing well until dusk on hedgerows just west of Grainthorpe Haven (North Lincs). Grainthorpe Haven is situated 10 miles NE of Louth and 2 miles NNE of Grainthorpe. The bird is in the hedge just west of the Haven accessed by walking SE from Horse Shoe Point for 0.8 miles, The last twitchable bird in Britain, discounting the Isle of Man bird, was in Essex in November 1996.

The first-winter male DESERT WHEATEAR remains at the south end of Easton Bavents Cliffs, just north of Southwold (Suffolk), whilst a second bird, a first-winter female, was discovered south of Sandwich Bay Estate (East Kent) at the Royal Cinque Ports Golf Course this afternoon (park by the Chequers Public House north of Deal then take the footpath east to the beach, where the bird is favouring the beach by the 6th tee).

An adult male TWO-BARRED CROSSBILL, present for two weeks, visited the garden peanut feeders again today, 4 miles SE of Stokesley and just west of Urra (Cleveland). Garfitts Farm is situated west of the B1257 and after 0800 hours tomorrow, special permission has been granted for birders to visit the site (NZ 563 030). PLEASE FOLLOW ANY ON-SITE INSTRUCTIONS.

Along with a BLUETHROAT on the Farne Islands (Northumberland), at least 6 NORTHERN GREY SHRIKES appeared on the East Coast, with a HUME'S LEAF WARBLER in Sallows near the toilet block on St Mary's Island (Northumberland) and another on North Ronaldsay (Orkney).. An OLIVE-BACKED PIPIT was at Beosetter on Bressay (Shetland).

The juvenile ROUGH-LEGGED BUZZARD at the Royal Liverpool Golf Course adjacent to Red Rocks Marsh NR, Hoylake (Wirral), remained in its tree overnight but then flew off at 0845, with another east over Scamblesby (Lincs) this afternoon. A Dark-breasted Barn Owl was seen just south of Embleton (Northumberland) this evening.

In East Kent, the first-winter AMERICAN GREEN-BACKED HERON remains on the Royal Military Canal at West Hythe, whilst a CATTLE EGRET was an excellent Shropshire find feeding in sheepfields just south of Ellesmere, 200 yards from Blackwater Meadow Marina between the plantation and the canal. In Hampshire, a CATTLE EGRET was also present near Bransbury Common before flying east, with another on Rimmer's Marsh, Marshside RSPB (Lancs). Meanwhile, this week's Home Counties GREAT WHITE EGRET flew SW over Spellbrook (Herts) at 1605 (Stephen Patmore).

The adult COMMON CRANE was again in the stubble field south of the A379 (SX 638 516) west of Modbury (South Devon) this afternoon (view from the first gate beyond Goutsford Bridge on the Orcheton road).
Posted by Lee G R Evans at 20:39