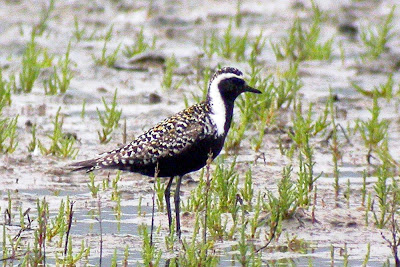 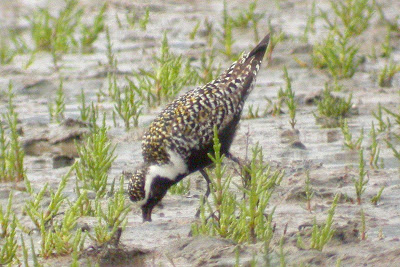 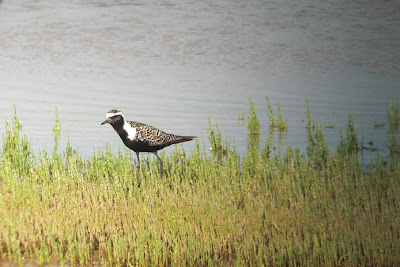 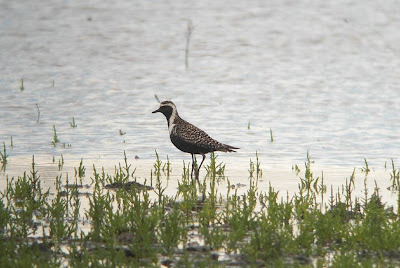 During the last few days (20-21 July), a COLLARED PRATINCOLE has been present at Pulfin Bog/High Eske NR, 2.5 miles north of Beverley and just east of Arram (East Yorkshire).

DIRECTIONS: Park sensibly and courteously on the road close to the Crown and Anchor public house in Tickton village then walk north along the river and under the road bridge for 1.5 miles to view the reclaimed gravel workings. This area is also good for OTTERS.

This morning, an adult LESSER YELLOWLEGS appeared 8 miles SE of York (North Yorks) at Wheldrake Ings YWT showing from the reserve's Pool Hide (yesterday a LESSER YELLOWLEGS was on the Eden Estuary, Fife, at Edenside at high tide briefly with Common Redshanks). Nearby, the two adult COMMON CRANES remain south of Goole (East Yorks) in fields south of Moorfields Farm.

In Norfolk, last week's Cley summer-plumaged adult AMERICAN GOLDEN PLOVER was relocated this morning at the east end of Breydon Water, where it was still showing at 0800 hours, whilst an adult PECTORAL SANDPIPER remains for a 5th day at Dungeness ARC Pit (Kent).

Other than rare waders, recent highlights include the continuing near-adult FRANKLIN'S GULL on Orkney Mainland at Holm at Howes Wick in fields near the old church (HY 510 008) and the GREAT WHITE EGRET in Suffolk - moving between Hen Reedbeds SWT reserve, Southwold, and Minsmere RSPB Island Mere. A GREAT WHITE EGRET, presumably the regularly returning colour-ringed adult, was at Mockbeggar Lake (Hants) yesterday.

Seawatching at Porthgwarra (Cornwall) has got off to a good start, with BALEARIC SHEARWATERS being seen daily (up to 36), large numbers of Manx Shearwaters, a few early SOOTY SHEARWATERS, some 15 CORY'S SHEARWATERS, the first GREAT SHEARWATER of the autumn (on 20 July), small numbers of European Storm Petrels, Atlantic Puffins (up to 11) and the odd POMARINE SKUA.

A fabulous pale morph adult POMARINE SKUA was an excellent find for a local patch-worker at Bill Oddie's old stomping ground of Bartley Reservoir near Frankley (West Midlands) - the bird showing well before being hounded by Lesser Black-backed Gulls from 0800-1250 hours when it flew off strongly SE.

On the passerine front, a couple of female RED-BACKED SHRIKES have straggled to Orkney - on North Ronaldsay and at Deerness respectively - and COMMON CROSSBILLS continue to penetrate in large flocks right the way across the country.

Recent news from IRELAND has been rather spartan but includes a first-summer RING-BILLED GULL at Sandymount Strand, Dublin, and up to 77 Mediterranean Gulls there, and a GREAT SHEARWATER off of the Old Head of Kinsale (Co. Cork).
Posted by Lee G R Evans at 10:47