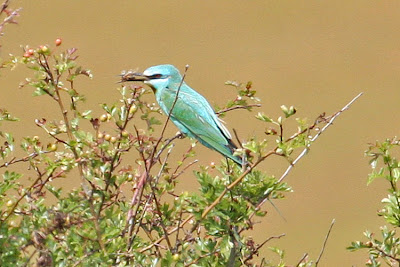 Jack Chantler stumbled upon a BLUE-CHEEKED BEE-EATER on his regular check-round of Bockhill Farm and its environs, St Margaret'a-at-Cliffe (East Kent), at 0950 hours this morning. The bird was sitting on a hedgerow about 300 yards north of the Bockhill Farm paddocks and was showing well. Jack quickly alerted his son and St Margaret's blogger Tony Morris and within a short while, all three observers were witnessing a spectacular event and a massively rare bird in Britain.

For around twenty minutes the bird sat in the bush but then took to the air and started hawking up and down the valley. It soon disappeared out of view but was heard calling on at least three occasions over the next half hour but not seen.

The news was quickly dissipated on to the Kent grapevyne and to Birdline South East and within a short while, other observers arrived. Just after 1130, the bird was relocated in the bottom hedgerow and was again showing well - perched on top of one of the bushes 60 yards west of the footpath. It continued to sit there for some time, taking flight on one occasion for a few minutes hawking for insects.

More and more birders then arrived so that by 1230, some 40 or so had gathered, including several of Kent's highest county listers. The bird was showing incredibly well and was a real 'scorcher' but at 1250 it suddenly took flight and went up high over the valley. It flew strongly northeastwards and appeared as if it was trying to head out to sea. Once over the cliff-edge, it followed the line of the coast path and was soon lost to view.

Thirteen minutes later it returned exactly to the same bush from whence it had flown and again showed well. Latecomers such as Dave Walker and the Dungeness crowd were enthralled as the bird once again 'wowed' its audience. This was some 'blocker', particularly as the previous Kent bird was a brief flyover in July 1989. Over the next half an hour, 20 or so more observers arrived (including Andrew Lawson) and just as Garry Bagnell and Gary Howard got there, it took flight again at 1338 and tagged on to a migrating party of Sand Martins and Barn Swallows.

Despite a strong SSW headwind, the hirundine passage continued uunabated (particularly of Sand Martins) and sadly the Bee-eater took this fourth opportunity to continue its wanderings and duly disappeared. Richard Bonser, James Hunter and I arrived shortly later, followed by many others including a surprising number of Kent stalwarts (Martin Coath, Johnny Tilbrook, Ray Turley, Paul Trodd, Marcus Lawson included) but despite desperately searching, the lost waif failed to reappear.

Tony Morris obtained an excellent selection of images (see his blog at http://stmargaretsphotodiary.blogspot.com/ ) and from these the bird can be seen to be an adult, heavily bleached in plumage and a peculiar blue shade.

Obviously one can speculate whether this is the same individual as recorded previously this year at Needs Ore Point (Hampshire) on 23 June and subsequently at Braunton Burrows (North Devon) on 30 June.

In addition to the previous Kent record at Church Hougham on 18 July 1989 (British Birds 83: 471), there have been just seven occurrences of this exotic species which occurs