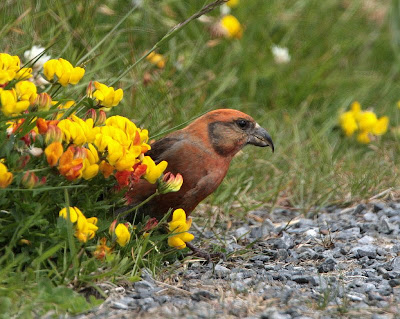 Adult male Common Crossbill, Shetland, June 2009 (Rob Brookes)
Since the middle of June 2009, large numbers of COMMON CROSSBILLS have been arriving in the Northern Isles, occurring in small parties on Shetland, Fair Isle, Orkney and on the Outer Hebrides. This replicates the vast numbers I witnessed in Scandinavia recently and suggests 2009 may be an irruption year.
Such irruptions generally involve up to 30 Two-barred Crossbills, these often appearing from mid-July.
Posted by Lee G R Evans at 13:14