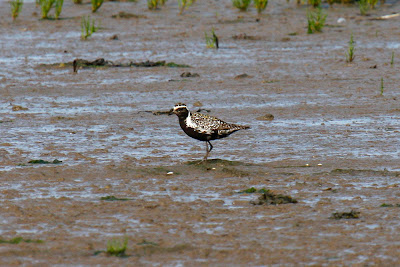 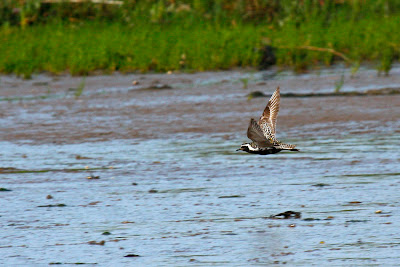 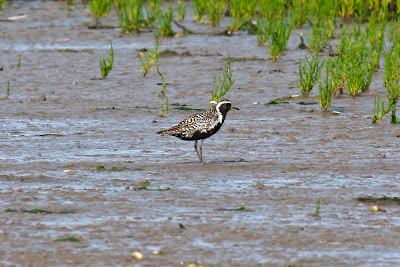 Adult summer PACIFIC GOLDEN PLOVER just beginning to moult, Breydon Water, Norfolk, 24 July 2009 (James Kennerley)
I had the good fortune of seeing this bird 'in the flesh' today at Breydon Water (initially along the NE shore from 0928-0951 and then in the muddy bay viewable from within the hide at 1135) and also the good fortune of seeing Andrew Grieve there. .
I struggle to see that this bird is in 'rapid moult' as has been suggested but merely that one flank is more moulted than the other, revealing much more white on one side (as in the Dutch bird). It does appear to have moulted some undertail coverts, but more white on the sides of the undertail is typical of fulva anyhow.
To my eye, this bird is an obvious PACIFIC GOLDEN PLOVER with little attenuation at the rear end, little primary extension beyond the tail, obviously longer tertials and remarkably long tibia. The overall structure is different from last week's adult at Cley and it has a pale base to the bill and a more pointed, thicker-based bill (the Cley bird has a typical short, small bill). It is a horizontal-poised, front-end feeder with a pot belly unlike the sleek, attenuated and long-primaried bird at Cley. It has a broad white eye-stripe and paler mantle definition, with more noticeable spangling.It is moulting but not particularly fast and still retains a majority of black underpart feathering. Adult summer AGP's moult later and most retain much of their black underpart feathers until October wheareas any PGP will be almost fully moulted by the first week in September.
Andrew gave me some very good information regarding the spring bird and it is clear he has put an awful amount of time and energy into investigating this occurrence. Much of what he says I agree with, particularly about the structure of the bill and the reasoning behind much of the genetic make-up of fulva. However, I still stand by a commitment to that bird being a dominica, particularly on the primary/tertial ratio and extension, but I do agree that the ageing of that particular bird is a bone of contention and will continue to be so. I still have it down as a first-summer. Andrew's investigations suggest it may have been a second-summer.
Going back to the current bird, I believe it IS the same individual as that in Holland on 21 July
Posted by Lee G R Evans at 22:37