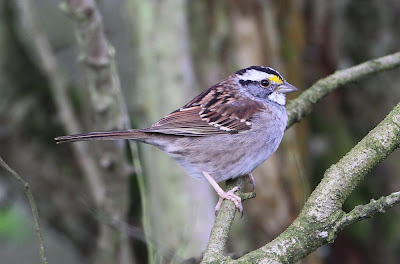 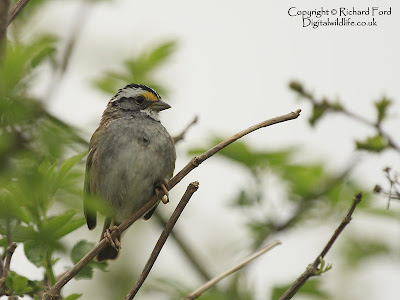 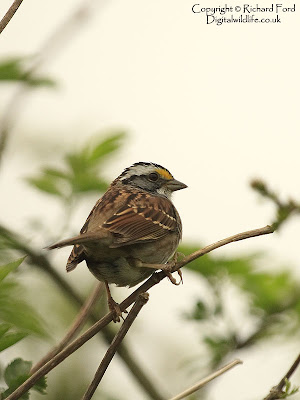 The first-summer male WHITE-THROATED SPARROW, initially discovered by Park Rangers on 7th November 2008, is still present today at Old Winchester Hill (Hampshire). The bird is frequenting two dense areas of Hawthorn and Elder scrub literally just south of the main car park and is generally elusive. It does seem to call frequently and this seems to be the best way of detecting it (it makes a Robin-like 'seeep' call and occasionally launches into its solemn and quiet song). It spends most of its day walking on the ground feeding in the undergrowth but at intermittent periods, it climbs up through the scrub and perches high on the flowering Blackthorns. A few hours on site should result in a sighting.

The main car park is situated on Hayden Lane at SU 643 214. Park carefully and courteously in the car park (capable of holding 40 vehicles) and follow any on-site instructions provided by the rangers.

David Mead (of Portsmouth RSPB) was responsible for finally getting the news of this bird out by independently locating the bird whilst searching the site for migrant Ring Ouzels. Heather Rowe also saw it shortly later, followed by their birding associate Kevin McCoy. News then filtered through to BirdGuides and Birdnet. The original finders (reserve wardens) had been advised by English Nature not to release the news because they were fearful of the influx of visitors its news release would have. When first found, the bird was quite tawdry and remarkably approachable. It was artificially fed at the car park and kept alive during this winter's severe weather (two weeks of hard-packed snow and ice) by regular feeding. Although it may have arrived unaided across the Atlantic Ocean, I suspect it pitched up in the English Channel on a vessel, most probably at the time when another first-winter made landfall at Cape Clear Island in County Cork last autumn.

Elsewhere, a HOOPOE was found this morning at Landguard NR (Suffolk) (where nearby, a WRYNECK roosted last night close to Kessingland Sluice - its second day) with another briefly at Barnham (Suffolk), a BLACK KITE flew north over Lancing (West Sussex) and a WRYNECK is on North Ronaldsay (Orkney)

The male SNOWY OWL is once more at Balranald RSPB, North Uist (Outer Hebrides), where it is favouring the barren coastline at Aird an Runair this week

A surprising number of BOHEMIAN WAXWINGS are still around including 40 on West End Road, Laughton (Lincs), 20 at Jesmond Dene, Newcastle (Northumberland), 4 on the A38 Sutton Road in Mansfield (Notts) and over 270 birds over the holiday weekend.

The drake RING-NECKED DUCK remains at Loch Ruthven RSPB and adjacent small lochans (Speyside) (with another, a female, at Swineham GP, Wareham, Dorset), whilst a drake LESSER SCAUP is at Vale of Coustry on the Quarry Loch (NS 733 996), Blair Drummond (Forth) (park by the A811 by the church and walk through Cutmill Brae to view). A further drake LESSER SCAUP is at Hornsea Mere (East Yorks) with another at Cardiff Bay Wetlands (South Wales). Two late SNOW GEESE remain at the Loch of Strathbeg RSPB (Aberdeenshire).

A RED-RUMPED SWALLOW remained for several days at Watermead Country Park (Leics) (10th-12th) before relocating to Upper Bittell Reservoir (Worcs) from 0940-1025 on 13th (and followed reports of two others), whilst ALPINE SWIFTS occurred at five locations over the Bank Holiday weekend (including two that lingered for over an hour in Lincolnshire and West Sussex).

A LESSER YELLOWLEGS was at Heybridge Basin GP (Essex) on 12, with a few WHITE STORKS of unknown origin at a variety of locations.

There has been a multitude of WHITE-BILLED DIVER claims in Northern Scotland including a total of 7 different birds off of their normal haunt at Ness, Lewis (Outer Hebrides) (Martin Scott/Tony Marr) and reports of up to 7 different birds in the Gruinard Bay area.
Posted by Lee G R Evans at 13:22