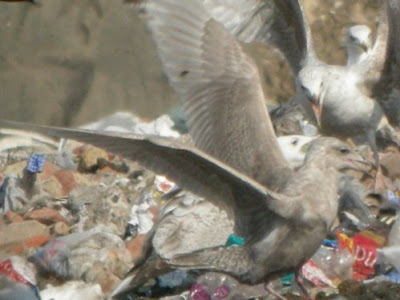 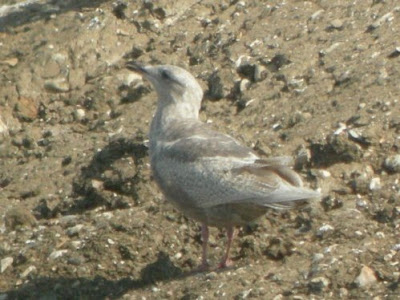 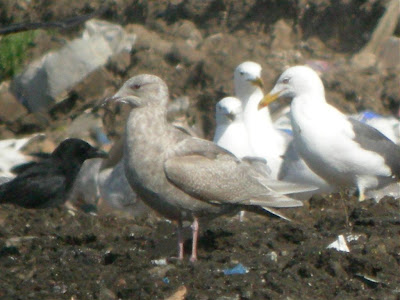 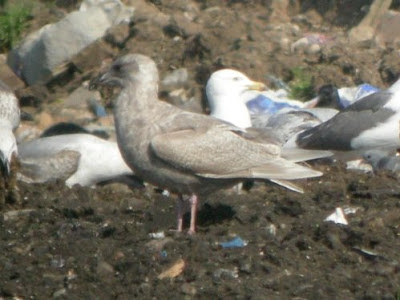 What is considered to be the juvenile 'white-winged gull' first seen at Queen Mother Reservoir (Berkshire, England) in February and then subsequently at Stewartby Lake (Bedfordshire) and Willen Lake (North Buckinghamshire) in early March and at Rainham Marsh (Essex) on 12 & 16-18 March reappeared at QMR two nights ago and was at Beddington Sewage Farm (Surrey) today (see images linked with the thread below)

This individual has dramatically changed its plumage between February and now and after writing it off as a hybrid back then (probably with North American Herring Gull influence), its appearance now far more resembles GLAUCOUS-WINGED GULL.

This winter has seen an exceptional influx of Arctic gulls into Western Europe, including record numbers of both Iceland and Glaucous Gulls in Iberia, the majority of which arrived just after a fierce winter storm arrived from the NW Atlantic (it also displaced several Snowy Owls and Gyrfalcons, Ivory and Ross's Gulls and a number of North American ducks, a Killdeer and an American Coot. We have already had an adult Glaucous-winged Gull in Cleveland in early January.

Looking forward to any feedback

Many many thanks
Lee G R Evans
Hi Lee,
Here is my comments and shots (click on them for better sized images)
http://peteralfreybirdingnotebook.blogspot.com/
Peterwww.peteralfreynature.co.uk
The following comments were kindly received
Not a safe candidate for a pure G-w in my opinion. Structurally it's too Herring-like, particularly how flat the skull looks with the crown feathers flattened, and it appears to have at least faint barring across the inner rectrices, Phil Pickering, Lincoln City, Oregon
Lee, If I saw that bird here where Glaucous-winged is common, I would NOT identify it as a Glaucous-winged particularly at this time of year. The structure is off, plumage is off, fading state seems off…everything seems off from a central California perspective. I would say it is a hybrid of some type. Regards, Alvaro Jaramillo
chucao@coastside.net
Half Moon Bay, California
The Beddington bird's plumage looked impressive at first glance for 1st-winter Glaucous-winged but Peter Alfrey's larger photos seem to portray a slighter bird and bill perhaps indicating (as has been suggested) some sort of hybrid? http://peteralfreybirdingnotebook.blogspot.com/
Plumage looks decent for Glaucous-winged but structurally less convincing (especially size and shape of bill): http://surfbirds.com/albums/showgallery.php/cat/601
Hybrid American Herring x Glaucous-winged we'd expect to show more of a dark tail band?
Southern California has also had a bit of a white-winged gull event winter this year too with excellent numbers of Glaucous and significantly more Glaucous-wingeds than usual. Seawatching reports this week have revealed flights of Glaucous-wingeds heading north.
Best, Andy Birch
Los Angeles
Posted by Lee G R Evans at 01:08