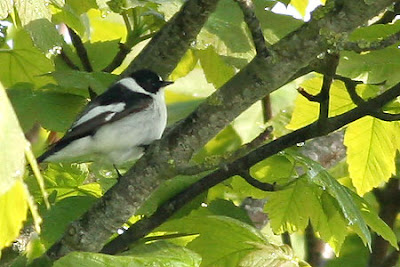 The beautiful first-summer male WHITE-COLLARED FLYCATCHER was still present today and showing very well throughout much of the day.

It was still frequenting Pete and Debby Saunders' garden in Southwell and during the warm sunshine, was commuting between the four tall Leylandii conifers at the back of the garden and two Sycamore trees and two flowering Apple trees. Although there is NO ACCESS WHATSOEVER to ANY of the private gardens in Sweethill Lane, the garden can be adequately overlooked from the road and the bird seen at 75 yards as it actively moves about the trees (flycatching on many occasions).

DIRECTIONS: Head as if you are driving to Portland Bill proper but instead of turning down to the Bill by the Eight Kings public house, continue back around into Southwell and just after the bus stop turn into Sweethill Lane. After just a few yards park sensibly and courteously in the road and by number 8 view through the wide gap towards the Bill and the back garden. Please, please consider the local community and respect all privacy of the residents. Actively involve and inform any local that is interested in the event.

White-collared Flycatcher is a very rare vagrant to Britain and a particularly challenging bird to catch up with - Poland is the best place to see them, where they are numerous in the old Oak forests.

5) A male remained in the Trapping Area at Holme NOA Reserve (Norfolk) from 4th-6th May 1969 and was trapped on 4th. This was the first individual to be 'twitched' and was enjoyed by over 75 observers (British Birds 63: 286).

11) An elusive male frequented the churchyard and parkland at Northdown Park, Foreness (Kent) from 24th May until 9th June 1984. It was extremely difficult to see as it moved rapidly between the canopy branches, but was eventually enjoyed by over 825 observers (British Birds 78: 578).

14) A first-summer male frequented the bowling greens and adjacent parkland and private gardens at Sparrow's Nest, Lowestoft (Suffolk) from 13th-14th May 1985. It was an unusual individual in that it spent virtually the whole of its stay feeding on the ground and could be observed dashing around the bowling greens snapping up flies. It disappeared just after midday on 14th, but by then had been enjoyed by up to 85 birders. An account of the occurrence and an excellent photograph of the bird taken by the late Brian Brown was published in British Birds 82: 223-224, plate 151.