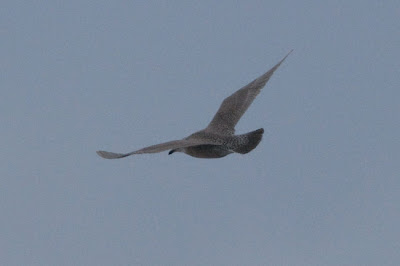 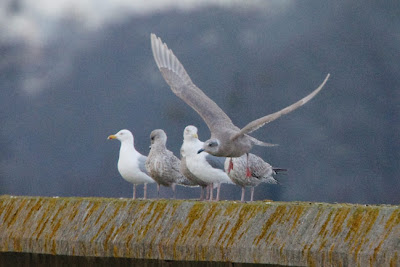 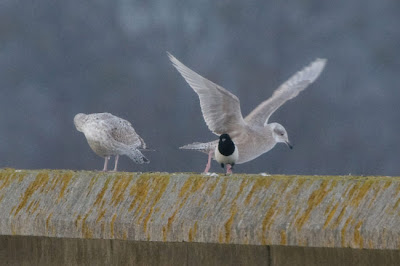 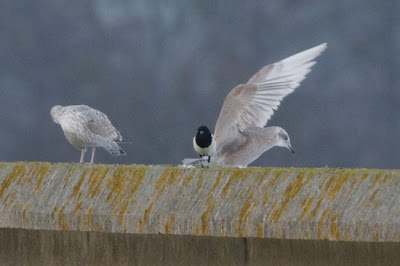 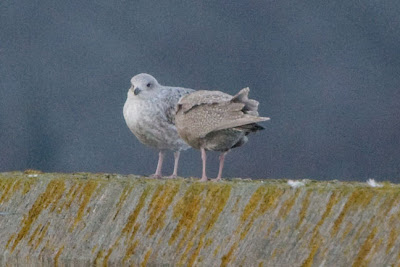 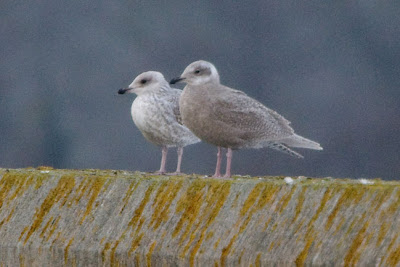 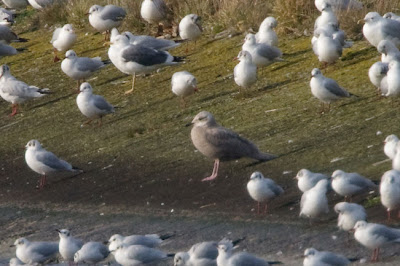 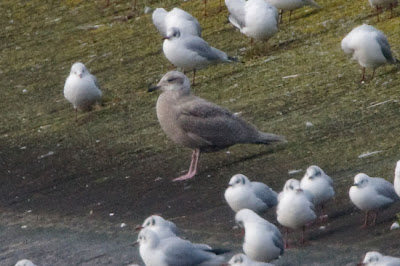 Chris Heard has commented on this very interesting juvenile gull which he discovered at Queen Mother Reservoir this morning and was excellently photographed by Mike McKee this afternoon. It shows traits of both Thayer's Gull and North American Herring Gull.
''I first saw this bird at 11am and watched it – down to close ranges (from inside the car) – until 12.45pm. I concluded that it is a hybrid (if I'd thought it was a Kumlien's I would have broadcast it on Birdline South East!).
Kumlien's Gull is essentially an Iceland Gull with darker pigmentation on the primaries, especially the outermost. This bird does not have darker primaries – or even darker outer webs to these feathers (no `venetian blind effect' whatsoever). At rest the primary tips do show a darker arrowhead, but this pattern can also be seen on first-winter Icelands (eg plate 425 in Grant, 2nd edn). In fact, although the primaries are otherwise uniformly pale, they have the same warm brown tone as the the body plumage. So, if it's not assignable to kumlieni, could it still be an Iceland Gull in the broader sense? I think not - for the following reasons:
Size & Structure. This bird is significantly larger than argenteus Herrings. On it's own this would not be a problem but it also has a robust build – it does not look long-winged and it never appears short-legged (as all Icelands do). It is also very aggressive – attacking many other gulls - and was only successfully challenged by a GBB!
Head doesn't have a gentle look. The bill is not short and neat but actually quite long – the shape, colour and patterning are much like first-winter Herring (rather than being all or mostly dark, or having a simple two-tone pattern, it has dark and lighter areas extending along the whole of the basal section). The head is also oddly plumaged with pale areas on the throat and nape (cream-white – the palest part of the plumage!) combined with a darker, more uniform patch encompassing the eyes and ear-coverts and a mottled pattern on the forehead and crown.
General coloration is a light warm brown. This might occur on a recently fledged Glauc/Iceland but this late in its first-winter it should be a lot paler in colour and colder in tone. The pattern on the wing-coverts is like a more intricate version of Herring Gull's while the scapulars show fine vermiculation rather than the coarser scaling/barring of juv/first-winter Iceland. The tertials have vermiculated fringes (& paler tips) but much plainer centres.
I have seen at least eight hybrid `white-winged' gulls in the county prior to this, but this one is intriguing because it doesn't show an obvious Glaucous Gull jizz. But these hybrids are notoriously variable (Chris Heard)''
Posted by Lee G R Evans at 22:22