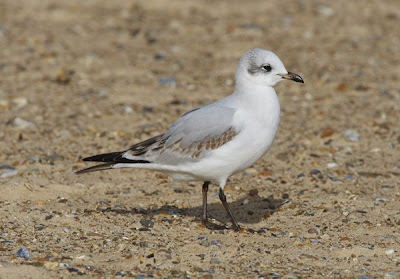 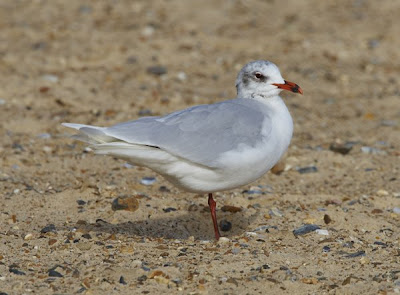 First-winter and adult winter Mediterranean Gulls (Simon Knight)
I was very fortunate to visit Pagham Harbour (West Sussex) last Friday and in doing so, recorded my largest ever single gathering of MEDITERRANEAN GULLS in Britain. I click-counted a staggering 267 individuals, commuting between Pagham Lagoon to sit and bathe and the shingle spit leading out from the west arm of the harbour mouth.

The vast majority were adult birds, ranging from full winter to virtual full breeding plumage, with 33 2nd-winters and 14 first-winters. It was a fabulous sight and the bird's deep, guttural 'craaking' call could be heard everywhere, as the birds flew overhead.

Has anyone got any photographs of this incredible flock? If so, I would be extremely grateful if they could be emailed to me.

I later saw Dave Smith at Goring and he informed me that he and Bernie Forbes had counted an absolutely staggering 379 birds there earlier in the autumn on 19 September 2008.

Mediterranean Gull is a real success story in Britain and numbers have been increasing year-on-year - a total of 270 pairs bred in 2008. It is likely that the Pagham birds originate from the breeding colony in Langstone Harbour, where a record 264 pairs bred in 2006. Sadly, due to the removal of protective Sea Beet after winter storms, just 94 pairs bred in 2007 raising just 15 young (see the brilliant 2007 Hampshire Bird Report just published) (Lee G R Evans)
Posted by Lee G R Evans at 20:56