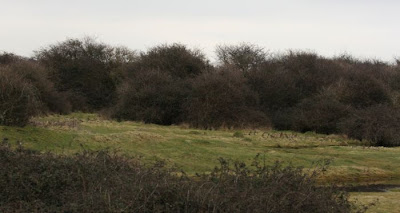 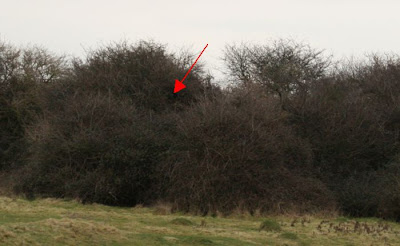 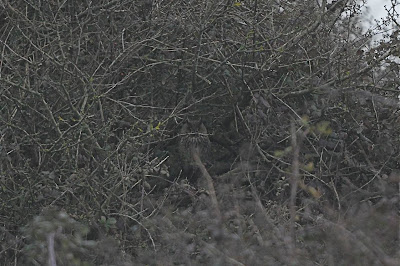 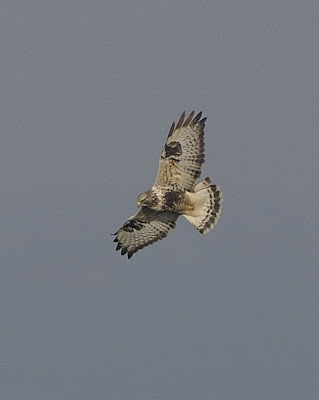 Another mild day, with light SW winds and temperatures stable at 13 degrees C. A front moved in later in the day, bringing poor visibility and persistent drizzle.

FARLINGTON MARSHES
(with Maggi Short and others)

The roosting LONG-EARED OWL was showing well when I arrived early afternoon, still perched in its favourite 'cavern' inside the scrub.

DIRECTIONS: From where you park the car at the reserve entrance, walk through the gate and follow the sea wall down towards the main lagoon for 200 yards, to just beyond the small pond and interior gates. Set your 'scope up and train it on the obvious cluster of Hawthorn bushes looking NE towards the M27. The owl is roosting in the obvious dark 'hole' in the hawthorn (the upper section - see above photograph) and can be easily seen from the sea wall (I picked it up with binoculars initially). The views from here are more than adequate so there is no reason why anyone needs to get closer to it, particularly as doing so is most likely to force it to change its roosting spot. It has favoured this location for three days so please consider others and view it from the bank.

The ROUGH-LEGGED BUZZARD (first identified from Jerry O'Brien's photograph this past weekend) was present from at least 1500-1600 hours at the feeding station west of Pilot Hill (at SU 398 596). It was roosting precariously on one side of a dead Hawthorn (in the Hampshire side) before being flushed by a birdwatcher that had walked to the site (rather than 'scoped from a distance) and it then flapped low to the ground 500 yards to the north to roost in a tree (out of view) in Berkshire at cSU 600 394. Unfortunately, the light conditions were awful this afternoon with constant heavy drizzle.

The 'feeding station' on Pilot Hill really is a hive of activity with 11 RED KITES attending, as well as at least 15 Common Buzzards. Amongst the latter, are four pale morph individuals, including one which resembles a Booted Eagle or Osprey and three which have white on the head and extensive white breasts with some variable areas of dark breast-band. The Rough-legged Buzzard itself is a dark individual and small, most likely a male in its third calendar year. There were also 2 COMMON RAVEN noisily parading the area and a flock of 75 Fieldfares.

DIRECTIONS: Utilising OS Landranger 174, leave the A343 opposite the Texaco garage in Hurstbourne Tarrant and follow the minor road NE for three miles to Faccombe hamlet. Continue north up the incline to just beyond the wind turbine (about 800 yards beyond the village) and park sensibly and courteously on the grass verge. There is a gap in the hedge from where one can 'scope from at SU 387 594 and the bird is most often seen at the 'feeding station' directly to the east on the west slope of Pilot Hill.

This vicinity of Hampshire is by far the last remaining stronghold of the WILLOW TIT in SE England and in the last hour of daylight I was fortunate in seeing at least four different birds, at different spots along the wooded valley towards Netherton (and in Faccombe Wood) (from SU 387 555 to 377 568). I also recorded MARSH TIT, 4 Nuthatches, large numbers of Common Pheasant, WOODCOCK and 6 Roe Deers.

Rough-legged Buzzard was both a Berkshire and Hampshire 'lifer' for me so indirectly I was pleased that the 'trespassing birdwatcher' flushed it from one county to another but to keep the landowner on side (and he was indeed a very nice, concerning and interested individual) I suggest that birders only view distantly from the road and do not attempt to disturb the raptors at this long-standing feeding site.
Posted by Lee G R Evans at 19:57