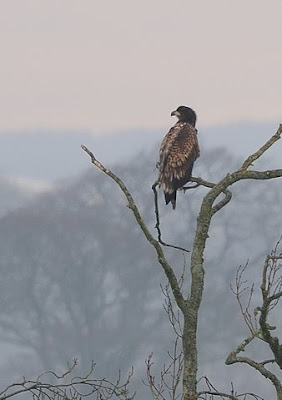 As I stated previously in earlier emails, I was of the opinion this bird was from a Scottish reintroduction project. It seems as this suggestion has been confirmed as BirdGuides.com is reporting that the bird at midday (still perched in a tree on Lamb Island by the River Dee in Threave, SW of Castle Douglas), is bearing a satellite transmitter CONFIRMING that it is a juvenile WHITE-TAILED SEA EAGLE released in 2008 as part of the Fife Reintroduction Scheme.

Chris Rollie of the RSPB added:

''ok, the bird that was at Threave until around noon today was identified positively by RSPB kite officer George Christie as a 2008 female from the east Scotland release scheme. It has one colour ring on left leg (silver over red) and a BTO type ring on right leg, but these can be notoriously difficult to see, as can the transmitter and aeriel. Anyway, it was last recorded in Stirlingshire last week.

The first sighting at threave last night was around 5pm by a farmer, whereas the last sighting I know of on the Solway was around 3.30 pm and it was heading west. So, it is almost certainly the same bird. Anyway, it was last seen around noon heading towards Kirkcudbright I gather''.
Keith Kirk obtained the excellent photograph above, as the bird roosted in a tree at Threave.
Posted by Lee G R Evans at 12:49