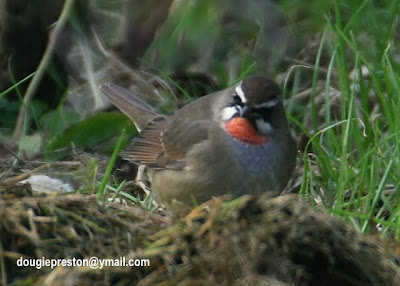 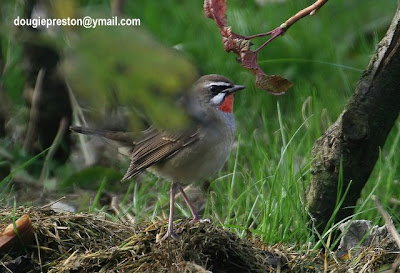 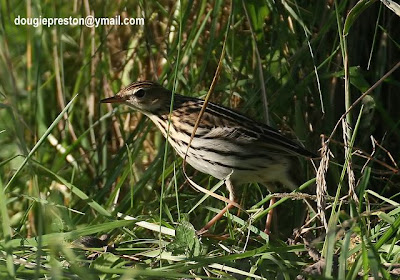 A first-winter SCARLET TANAGER was discovered early afternoon in St Levan valley (West Cornwall). Two local lads both found it (Dave and Matt) and watched it on and off for about 25 minutes as if fed in a Pear tree in the grounds of Grey Gables, close to the church. As neither are twitchers, it was not until late afternoon that they passed the news on to one of the main contacts in Penwith. About 25 birders then quickly gathered at the site, but there was no sign of anything in clear, cold conditions from 1630 hours until dusk. This is the first Scarlet Tanager in the county since Brian Mellow's bird at Nanquidno in the mid 70's.

At the opposite end of the country in Shetland, the gorgeous male SIBERIAN RUBYTHROAT continues to show intermittently in the garden at Ockendons, at Gulberwick - 2.5 miles SW of Lerwick. Now present for its fourth day, several birders flew in today and connected from the south. A bonus bird came in the form of a PECHORA PIPIT at the same site - this bird showing somewhat more frequently (see Dougie Preston's excellent images above).

On the Isles of Scilly, the first-winter NORTHERN WATERTHRUSH remains on Lower Moors at Shooter's Pool, with 1-2 RED-THROATED PIPITS on St Mary's in the Pungies Lane area, 1 OLIVE-BACKED PIPIT still in fields along Watermill Lane, the WILSON'S SNIPE on Lower Moors and the UPLAND SANDPIPER still at Maypole. A MELODIOUS WARBLER has relocated to Penninis Head, favouring Pittisporum bushes by the entrance to the Farm Trail. On Tresco, both the LESSER YELLOWLEGS and SPOTTED CRAKE remain.

West Cornwall offers two migrant RED-BREASTED FLYCATCHERS today, with singles in the Willows and Sallows by Porthgwarra car park and in the garden at the seaward end of Kenidjack Valley, whilst further east, the LESSER YELLOWLEGS continues on the Tresillian River at Truro.

A juvenile PALLID HARRIER adds Cleveland to its tally of counties, showing well today at times in the reeds at the north end of Dorman's Pool at Teesmouth. ROUGH-LEGGED BUZZARDS have been arriving in numbers, with two being present at Abberton Reservoir (Essex) viewable from Stafford's Corner.

The UPLAND SANDPIPER at Termoncarragh Lake (Co. Mayo) continues to be the main attraction in IRELAND, although a RED-EYED VIREO in County Cork at Mizen Head is also of major interest.

Recent BARRED WARBLERS have included singles at Slyne Head and at West Beara at Gerinish
Posted by Lee G R Evans at 21:21