SANDHILL gives itself up to the 'Southerners' 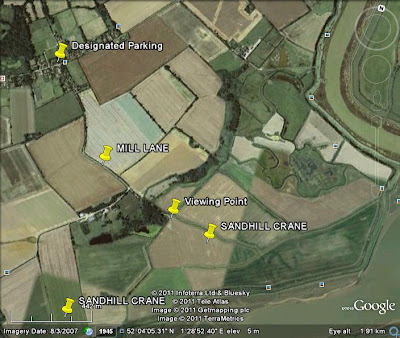 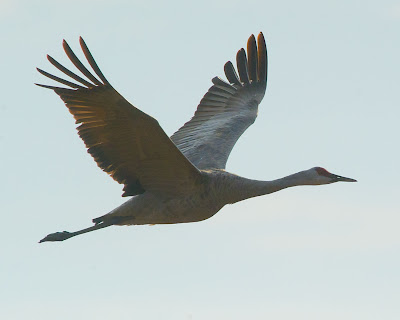 Phil Bishop took this shot as it flew over us this morning, just after the first sun rays shone through the clouds.........fortunately for latecomers, it pitched down again after a mile further south

The adult SANDHILL CRANE that had been present at Loch of Strathbeg RSPB (Aberdeenshire) from 22-26 September and was later seen flying between Northumberland and North Yorkshire on 29 September, over Rimac (North Lincs) and later in the Wash (Norfolk) on 1 October, finally gave itself up in Suffolk on Sunday, after being tracked from Kessingland, Aldeburgh, Sudbourne and eventually to Boyton.

After being relocated at Boyton Marshes early afternoon on 2 October, some 350 observers connected with it before it went to roost on site. A further 300 managed to see it today - the bird still present until at least 1800 hours.

Boyton lies some 5 miles ESE of Woodbridge and is accessed by taking the Hollesley road east not far out of Melton, then Boyton road about a mile beyond the RAF base. Special parking arrangements have been organised inside Boyton village, whereby space is being allocated at the church and an additional overspill field - please donate £1 to the church for this kind generosity.

From the village, walk down Mill Lane to the gate at the end and then continue to the end of the wood to the right. The Sandhill Crane can be feeding in either of the two recently large tilled fields in front of you or with cattle in fields on the seaward side of the Hollesley Youth Detention Centre, accessed by continuing SE to the seawall and walking south for a further mile.

Another great find was that of a juvenile SOLITARY SANDPIPER by Stuart Piner on Sunday - still present today. Just SW of Garstang (Lancs) and SE of Nateby on the flood viewed Humblescough Farm SD 472 438. From Nateby Drive along Humblescough Lane, fork left at the Poplar Grove signpost to the farm. Park sensibly at the farm - £4 per car.

Another recurring feature of recent autumns has been the post-breeding dispersal of Iberian GLOSSY IBISES and this year has been no different. A flock of at least 11 birds roosted this evening in trees behind the hotel in Courtmacsherry (Co. Cork) following at least 10 recorded along the South Coast of Britain over the weekend, including a party of 7 on the Isle of Wight, 3 at Stanpit Marsh (Dorset) and another on the Ogmore Estuary (Glamorgan) in South Wales.

With such fine weather even extending to Shetland over the weekend, noteworthy birds found in that archipelago included a SIBERIAN BLUE ROBIN on Foula (found freshly dead sadly), a PALLAS'S GRASSHOPPER WARBLER on Fair Isle, PECHORA PIPIT on Foula (and another on neighbouring North Ronaldsay in Orkney), BLACK-HEADED BUNTING on Unst, 3 juvenile AMERICAN GOLDEN PLOVERS on Fetlar and ISABELLINE SHRIKE, ALPINE SWIFT, 5 OLIVE-BACKED PIPITS, 5 LITTLE BUNTINGS and a CITRINE WAGTAIL in South Mainland.

What was presumably a second NORTHERN WATERTHRUSH was trapped on Porthellick Pool, St Mary's on Saturday, with the long-staying bird still elusively feeding at Higginson's Pond on Lower Moors. A GREATER SHORT-TOED LARK was about the Airfield area, where the juvenile AMERICAN GOLDEN PLOVER and 4 juvenile BUFF-BREASTED SANDPIPERS remained, with two different juvenile LESSER YELLOWLEGS being present (on Lower Moors and Tresco Great Pool respectively), several Wrynecks, a Red-backed Shrike on Tresco and the odd mobile ORTOLAN BUNTING on St Mary's.
Posted by Lee G R Evans at 21:49