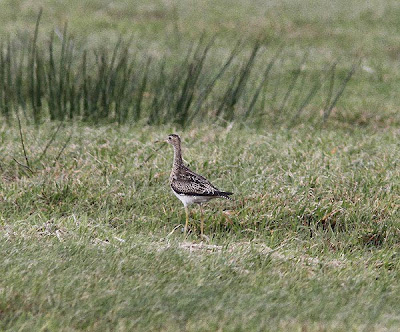 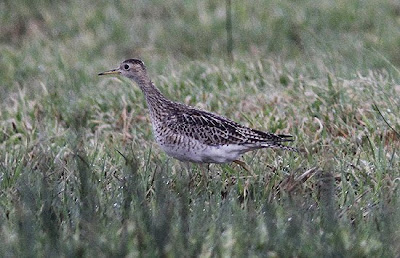 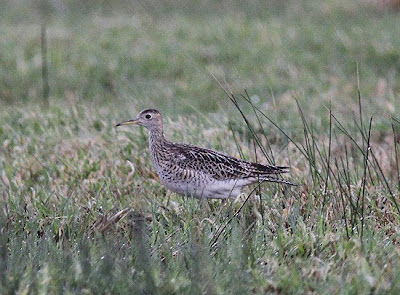 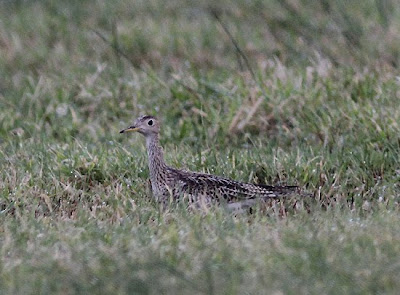 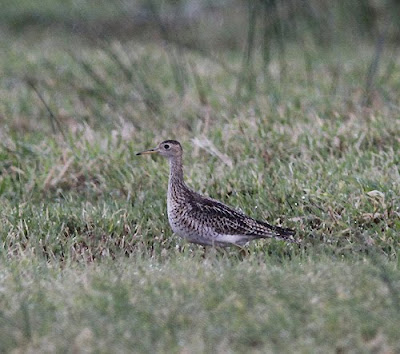 A first-winter female PIED WHEATEAR, discovered yesterday afternoon by Gwent birder Darryl Spittle, showed well all day today around the two buildings at Thornbury Yacht Club, half a mile west of the Anchor public house in Oldbury-on-Severn (South Gloucestershire). It was particularly confiding, even perching on a bench whilst a birder was sat on it late morning, and was on one occasion seen with a Northern Wheatear and a lone Scandinavian Rock Pipit. Park sensibly, either in the pub car park or in the five spaces opposite.

In East Norfolk, a first-winter ISABELLINE SHRIKE continues to show very well at Horsey, in Bramble scrub between the Horsey Corner car park and the Nelson's Head track, with another reported in Penwith (West Cornwall) in hawthorns opposite St Just Aerodrome (on 24 October). Southeasterly winds also produced two OLIVE-BACKED PIPITS at Filey North Cliff Country Park (North Yorkshire), wandering around elusively in Top Scrub, with another showing well on the track before the hostel at rattray Head (Aberdeenshire).

On the Isles of Scilly today, the ever-present first-winter NORTHERN WATERTHRUSH was still performing today - either in front of the screen at the Lower Moors Shooter's Pool or at the nearby ISBG Pool - with a fairly vocal DUSKY WARBLER in exactly the same area and the first-winter WILSON'S SNIPE briefly. The first-winter UPLAND SANDPIPER continues to show well in the bulb fields at Maypole Junction, whilst the COMMON TREECREEPER remains in Carreg Dhu garden at Longstones.. A RADDE'S WARBLER and BLUETHROAT are both being seen in Troy Town, St Agnes, in the cabbage crop by the farm and at Castella Down, whilst also on St Agnes, a Siberian Lesser Whitethroat remains in Chapel Fields at Periglis Beach. Meanwhile, Tresco continues to host the LESSER YELLOWLEGS, PECTORAL SANDPIPER and SPOTTED CRAKE.

Belated news concerns a SWAINSON'S THRUSH on Friday 21 October in the front garden of Kirbuster Farm Museum at Birsay on Orkney (Norman Watt), whilst elsewhere in Orkney, the male SIBERIAN STONECHAT continues for a second day on North Ronaldsay and two NORTHERN TREECREEPERS have been located in recent days. Farther north still, incredibly the dapper male SIBERIAN RUBYTHROAT remains at Wick cottage (HU 441 392), Gulberwick, Lerwick (Shetland) - the longest staying individual ever (and now successfully twitched by no less than 90 observers). Meanwhile, Tiree's first-winter ASIATIC BROWN SHRIKE continues to perform at Balephuill, but without any takers other than the few resident birders.

A SHORE LARK is a rare bird for the London Recording Area and hence why a procession of local listers jumped the fence at the permit-access only Queen Elizabeth II Reservoir in the Walton complex in Surrey today.

A Continental BLACK-BELLIED DIPPER was a nice find today, frequenting the river at Fenso Marston Nature Reserve at Shipley (West Yorkshire), often with a resident Dipper.

The two juvenile LONG-BILLED DOWITCHERS remain at the east end of Blagdon Lake (Somerset), with the adult SPOTTED SANDPIPER nearby at Herriott's Bridge, Chew Valley lake (Avon) and the ever-present juvenile at the north end of the Plym Estuary at the Marsh Mills Roundabout, Plymouth (South Devon). A juvenile PECTORAL SANDPIPER in Cumbria is present for a second day on the Lyth Valley, in the field pool between Brigsteer and the A5074, 600 yards south of the Helsington Pool Bridge (SD 472 890), whilst the adult WHITE-RUMPED SANDPIPER is still present but flighty at Rutland Water (Leics). Another late juvenile PECTORAL SANDPIPER remains in County Durham - at the Castle Lake at Bishop Middleham, whilst another juvenile LONG-BILLED DOWITCHER is at the harbour wetland in Wigtown Bay (Dumfries & Galloway).

An explosion of Field Voles in Arctic Siberia and Scandinavia has seen a bumper breeding season for northern raptors with ROUGH-LEGGED BUZZARDS continuing to arrive. Today saw birds at Goswick (Northumberland), Huttoft Bank and Anderby Creek (North Lincs), the Sleddale Moors (Cleveland) (at least two), Beeley Moor (Derbyshire). Skegness and Gibraltar Point NNR (Lincs), Holkham Freshmarsh (North Norfolk), Earith Washes (Cambs) and Dungeness ARC Pit (East Kent). Also related to the influx, juvenile PALLID HARRIERS continue to be located - with a juvenile yesterday over Goonhilly Downs (Cornwall) and another today in Lothian, first seen flying in off the sea at St Abb's Lighthouse and then later over Barns Ness being mobbed by corvids.

A CATTLE EGRET is with livestock at Blakeney Freshmarsh (North Norfolk), where it can be 'scoped from Friary Hills, whilst unusually late was a juvenile PURPLE HERON at the Bottom Tank at Saltholme Pools RSPB (Cleveland) (it flew to Haverton Hole at dusk). GREAT WHITE EGRETS include long-staying birds at Linford NR (North Bucks), Denge Marsh (East Kent) and Mockbeggar Lake, Blashford Pits (Hants) and further singles in the borrow dyke north of the southern seawall at Copt Hall Marshes (Essex), roosting in trees at the rear of Fowlsyke Flash (SK 525 997) (South Yorkshire), at Vennford Reservoir (SX 685 710) (South Devon) and in fields by Watermill on the Ogmore Estuary (East Glamorgan).

Up to 3 GREY PHALAROPES were seen on rough seas off Cley NWT (North Norfolk), with another two off Waxham Gap (East Norfolk) and another at Breydon Water (Norfolk), with one stranded at Mersehead RSPB (D & G)

Massive numbers of continental MEALY REDPOLLS are arriving, along with numerous Siskins, Firecrests and Short-eared Owls

In IRELAND, the star prize remains the first-winter UPLAND SANDPIPIER on The Mullet (Co Mayo) in the rushy fields by the road to Glebe House at Termoncarragh Lough (see Aidan Kelly's superb images above). In County Wexford, two different NORTHERN HARRIER-types are being seen - a juvenile and a second-winter male - both roosting at the Lingstown reedbed.

In County Galway, the juvenile DOTTEREL and AMERICAN GOLDEN PLOVER are still at Aillebrack, whilst two GLOSSY IBISES still remained at Timoleague (Co. Cork) this evening.

A SUBALPINE WARBLER was a late find at the Old Head of Kinsale (County Cork), favouring vegetation inland from the plantation in the roadside hedgerow opposite the pink bungalow, with both the BARRED WARBLER and RED-BREASTED FLYCATCHER and RED-EYED VIREO still at Mizen Head (Co. Cork)
Posted by Lee G R Evans at 21:37