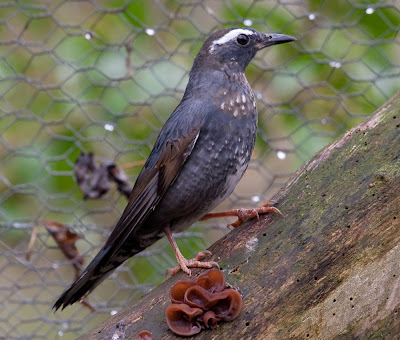 First-winter male Siberian Thrush in captivity, Natural Surroundings NR, Glandford, Norfolk, 3 March 2009 (John Miller)
I am afraid that after spending the best part of a week investigating this claim and to talking to the cage bird trade, the finder and those with a vested interest in the bird, birders with experience of the species in the wild in Asia in spring and to ringers, the first-winter male Siberian Thrush recorded last week at Glandford is being accepted on to Category D1.

This category deems the bird to be of unknown origin, with the likelihood of it being an escaped bird higher than that of it being a natural vagrant. It is therefore NOT COUNTABLE on any UK400 Club/BBA listings I am afraid.

I was not able to trace directly the bird, although a bird matching the description (still awaiting images) escaped from an aviary in Kettering (Northants) on 2 March. This bird however had a silver closed ring on its right leg when it escaped. According to bird traders, the last importation of a Siberian Thrush into Britain (from Asia) was in February 2003, although several have been handled in Antwerp subsequent to this date.

As an aside, I did receive this anonymous email from Johnny Allan, which may or may not be genuine (it may have been a spoof email). It was apparently sent to Birdforum. If it is genuine, can the poster contact me directly please (and if anyone knows anything about this email, get in touch).

"Hi folks- I believe that this Siberian thrush is one that I bred in 2008 in my aviaries and escaped from a friends house in the Midlands. It certainly looks like him! And what a coincidence! Please note I am a genuine hobby aviculturis t- not a spammer.1)
To prove their captive bred status At 4/5 days old I ring all my young birds with an IOA 2008 size K closed ring - which I believe someone must have cut off since its escape (perhaps when it was captured to 'save' it?). If this has happened then this does really shock me. This ring was tight on the leg so would not have been able to be accidentally pulled off.
2) If this was a captive-reared bird owned by someone else and not a wild British bird why was it subsequently released to its probable death and with no chance of breeding?
3) It has typical 1st winter colouring of captive birds (and certainly similarto other young from this pair). I do remember it having just a bit of immature plumage on the breast.
4) A bird can act 'wild' in the 'wrong' type of aviary- subtle changes can make the bird feel more or less secure. My birds rarely see anyone else and when they do they are worried to an extent. Photographs show the bird as being quite confident and settled. If a number of people were around the bird it would easily 'spook'. Was an aviculturist available to properly advise? (the bird would have been better off in a small secluded aviary with closed sides- not a large open flight- mine love skulking in an enclosed shelter).
5) The prevailing winds have been strong toward the East from the point and time of escape.
6) I am one of a very few who do manage to breed them (although a bit 'tricky'). They have not been imported from the wild for the last 5+ years due to the well overdue Import ban on wild caught birds.
7) The bird has been reared in an aviary covered on the floor with barley straw-this is probably why there is little wear on the toe nails.
8) The wing ends may be missing due to being abraded on wire netting (although it was reared and has been living in a very large flight- 50ft in total length).
9) If the bird is caught or seen again please feed it on soaked and mushed dogfood- Wagg is one of the best- and poultry pellets and halved apples. It will recognise black seed trays as feeding and watering vessels.
10) Unfortunately I do not have any photographs of the bird in my care however if the bird is re-caught DNA evidence could prove that the bird is from my breeding stock. Hopefully it could then be returned to my friend.Sorry if this sounds like a bit of a rant - but when you have followed these birds from the egg you do get a bit attached- I really feel for this little guy''