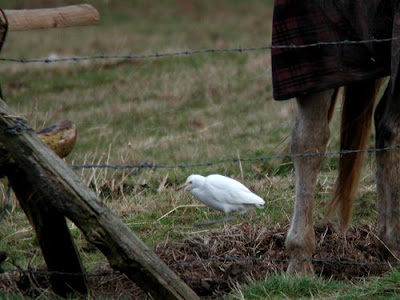 The CATTLE EGRET present on the Essex/Suffolk border remains for a second day (Stuart Read et al, see image above) showing well late afternoon in the field south of Malting Farm House (TL 933 340) 1.5 miles ESE of Bures and 3 miles WSW of Nayland. This is the same individual recently present in Norfolk.

Also in Suffolk, the GREAT WHITE EGRET remains elusively at North Warren RSPB Reserve (in the extreme NE corner, in reeds and ditches), with up to 152 Eurasian White-fronted Geese there, 250+ Barnacles and the feral adult Red-breasted Goose, large numbers of wildfowl, a WATER PIPIT and a migrant SAND MARTIN.

Neighbouring Minsmere RSPB has a brown-stained adult WHOOPER SWAN, a pair of SMEW (Island Mere), at least 15 MEDITERRANEAN GULLS on the main scrape and a trickle of migrant waders and 100+ PIED AVOCETS.

In Lowestoft, the long-staying BLACK-THROATED DIVER remains on Oulton Dyke at the extreme west end of Oulton Broad, being best observed from the Yacht Club on the south side in Merritt's Park (the drake American Wood Duck is also still present there).

A number of BOHEMIAN WAXWINGS still remain, with 26 in Sudbury (along Springlands Way), 14 at Coney Hill, Beccles and 12 in Worlingham (behind Primrose Drive).

Moving north into Norfolk, a ROUGH-LEGGED BUZZARD is on Haddiscoe Levels, with two more at North Wootton Marshes (viewable distantly from Dersingham Bog), the latter site holding a wintering NORTHERN GREY SHRIKE, with another at Roydon Common (visible from the westernmost car park). Dersingham Bog also has 10+ COMMON CROSSBILL, as well as Hen and Marsh Harrier.

The BLACK-BELLIED DIPPER continues on the River Glaven in Hunworth village, favouring the southernmost ford (please park sensibly and courteously in the vicinity), with a male NORTHERN WHEATEAR at Salthouse one of few incoming migrants of this week.

In Breckland, up to 4 NORTHERN GOSHAWKS are showing (view from the designated Goshawk Trail at Mayday Farm), with WOODLARKS in song, COMMON CROSSBILLS breeding, 3 HAWFINCHES in the paddock Hornbeams at Lynford Arboretum, a pair of WILLOW TITS by the river at Lynford Hall and 1 STONE CURLEW back on territory.
Posted by Lee G R Evans at 19:10