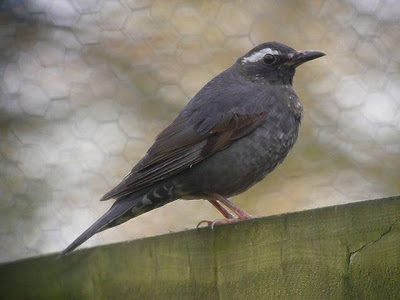 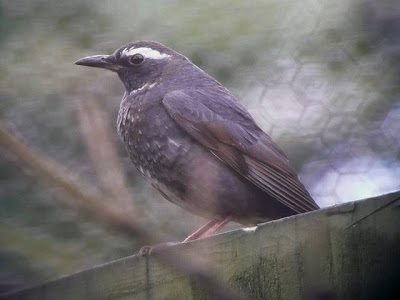 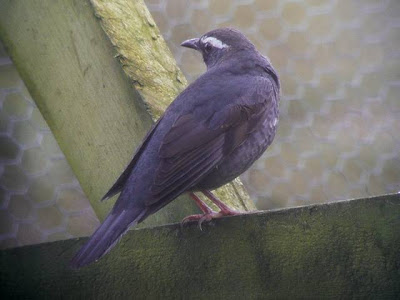 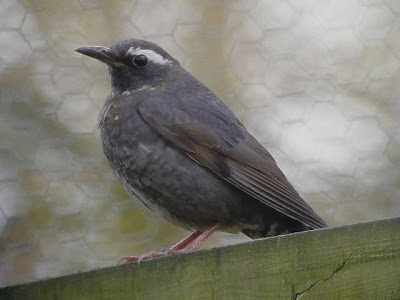 A superb first-winter SIBERIAN THRUSH was discovered today at Glandford, just 2 miles SW of Cley (Norfolk), where it flew in to a wire fence at the Natural Surroundings NR just east of the minor road between Letheringsett and Blakeney. Paul Laurie picked the bird up which had become very wet and bedraggled and rehabilitated it in a large Red Squirrel cage, which was positioned in front of the reserve shop. Whilst recuperating, some 30 Norfolk birders quickly visited, and observed the bird at close range in captivity. It was examined in the hand and found to be in perfect order, with no damage to the legs and feet and nothing untoward with the general plumage, and area at the base of the mandibles. I am concerned however by apparent anomalies at the wing tips but this may have been caused in the cage as it collided with the sides. The primary tips are broken on both wings but this is most likely damage incurred whilst in the cage.

The bird made a very swift recovery from its sodden and stunned state and became very restless in the cage, flying back and forth. This agitation led Paul to release it prematurely, and after a hole was cut in the cage, the Siberian Thrush 'zoomed' out and disappeared into thick cover down by the stream, about 100 yards away from the buildings.

It hid up in the vegetation by the side of the stream for about half an hour before reappearing, and then showed on and off until dark, affording over 150 birders with views.

Simon Chidwick kindly sent me some fabulous shots he took today as the bird was recovering and four of these are reproduced above.

ACCESS INSTRUCTIONS: Natural Surroundings is accessed off of the Letheringsett to Wiveton road and is signposted. There is a designated car park by the shop and access to where the bird has spent the afternoon is through the main centre - admission £3.00 per person. Paul Laurie will look for the bird from dawn tomorrow with access from 0800 hours.

Siberian Thrush is mega-rare in Britain with just eight records in total, including two previous records in Norfolk - a male seen briefly by Peter Wilkinson in Great Yarmouth Cemetery on 25 December 1977 and a first-winter male at Gun Hill, Burnham Overy, on 18 September 1994.

It breeds in Central and Eastern Siberia from the Yenisey and Lena rivers south to NE Mongolia and east and NE to China, Amurland, Sakhalin and northern Japan. Wintering areas include Central Burma, Indochina and Thailand south to Singapore, Sumatra and Java.

The British and Irish Records to date

4) A first-winter female was discovered at dusk in one of the Holland House garden mist-nets on North Ronaldsay (Orkney) on 1 October 1992. It was roosted overnight at the Observatory and then released close-by at first light next morning, immediately flying to a nearby croft garden. It remained here until late afternoon and then moved to the beach below the pier, where it remained until 8th. It was eventually 'twitched' by at least 180 observers and was featured in Birding World 5: 377-379 (British Birds 86: 510-511, plate 184)

5) A very elusive first-winter male was discovered in dense sueda at Gun Hill, Burnham Norton (Norfolk) early afternoon on 18 September 1994, where it remained until dusk, despite being flushed over 14 times during the afternoon (see published photograph of bird in flight in Birding World 7: 345; British Birds 88: 535).

6) The first for Scilly was discovered by Hugh and Ian Bradshaw as they checked the fields and hedgerows on Gugh. Whilst trying to relocate a nightingale species, they were rewarded with a first-winter male Siberian Thrush. Due to the brief views of the bird being obtained, and the associated difficulties on site, the news was slow to filter out, but by early afternoon, the tripper boats were arriving from all directions packed shoulder to shoulder with expectant and very excited birders. The plntation where the bird was favouring was soon encircled with the thrush eventually showing several times in flight on a gorgeous balmy afternoon. It remained, generally very skulking in behaviour and only occasionally seen perched, from 5-8 October 1999 (see colour plate on page VI in the centre pages of Isles of Scilly Bird Report 1999 (British Birds 93: 551).

8) The most recent record to date involved a first-winter male on Fair Isle (Shetland) on 25 September 2008 (see photograph in Birding World 21: 367).