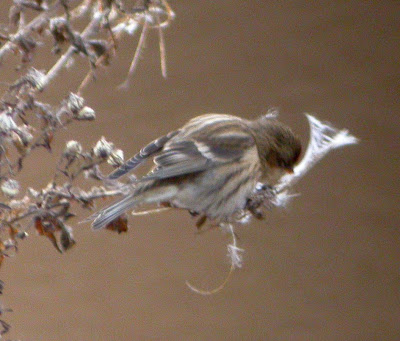 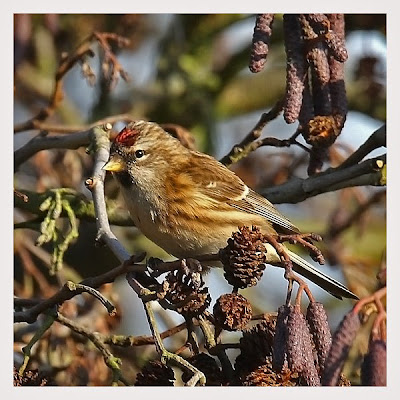 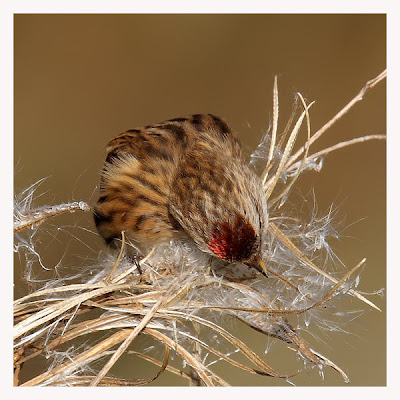 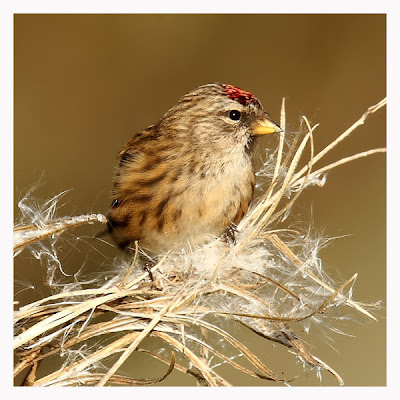 Utilising Steve Ashton's fantastic images (plates 2-4), one can illustrate the defining characters of a LESSER REDPOLL Carduelis cabaret.
The image at the top (plate 1) is of a well-marked LESSER REDPOLL in February (photographed in South Devon by Mike Langman). This is a very pale individual, showing the variation in wingbar and mantle bracing.
As a general rule, LESSER REDPOLL is the smallest and darkest form, with (importantly) no cloaked feathers about the nape nor no cloaked feathers on the 'thighs/trousers'. They CAN be sparsely marked on the undertail coverts (with little or no streaking at times) and regularly have pale-edged wing coverts (forming bars) and pale tramlines on the mantle and back. The rump is generally dark streaked. In spring, like all redpoll species, they become much paler, with obvious pink on the breast and deep red on the poll (forehead). Overall, they are rather brown-looking and have a long, pointed, yellowish bill.

A typical MEALY REDPOLL is larger and paler, with significantly more feathers on the 'grey' nape and long feathers on the tarsi (where they feed much more regularly on the ground). They are slightly more longer-tailed and much cleaner white below, with less streaking on the sides and flanks and often just one or two shaft-streaks on the undertail-coverts. Males invariably have much rosier-pink on the breast and a striking contrast between the ear-coverts and the grey feathering surrounding. The eye is more prominent and the bill is slightly shorter. The wing-bars are generally 'pure' white rather than buffish (although this is largely age-related) and the mantle 'tramlines' are white and not buffish-white. In flight, the rump should appear very pale, often white, with limited streaking.

A poorly marked SCANDINAVIAN ARCTIC REDPOLL may be difficult to differentiate from a very well-marked Mealy Redpoll but essentially will be much heavier feathered on the tarsi (with obvious trousers) and on the nape feathers. It will have a very noticeable short, rather 'pinched-in' bill and be very pale about the mantle, back, head, upperwings and underparts. Although first-winters may have noticeable streaking on the flanks and sides, the base colour is very white, with the undertail-coverts strikingly gleaming white without streaking (some showing just one dark shaft-streak). The greater covert bar is very broad and WHITE (no buff infiltration) with much white in the leading edge of the upperwings. The uppertail and rump are also extremely white, with little or predominantly no dark streaking in the rump and the whiteness continuing up into the lower mantle feathers. The head is often very white with limited streaking, with a contrastingly deep crimson-red 'poll' and a contrasting dark ear-covert patch.
Posted by Lee G R Evans at 09:17