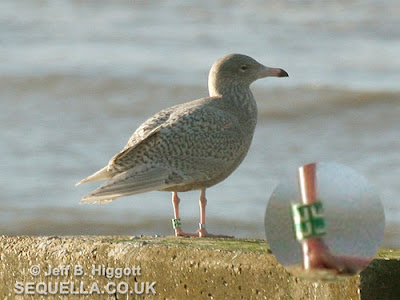 For nearly three weeks now, a colour-ringed juvenile GLAUCOUS GULL (hyperboreus) (white lettering 'LE' on a green ring) has been ranging the Suffolk coastline. Interestingly, this bird was ringed in the summer (18 July 2008) on Bear Island (Bjornoya), Svalbard, in the Barents Sea and south of Spitsbergen and the permanent pack ice limit. This large island is home to 6,335+ pairs of Glaucous Gulls.

This is a very interesting occurrence as for many years the origins of our wintering Glaucous Gulls was circumspect. Those birds breeding in the Canadian Arctic and western Greenland have always been considered to be fairly sedentary and moving south only into eastern North America. The eastern Greenland population is more migratory and largely winters in Iceland (up to 30,000 birds) whilst those from Spitsbergen and Bear Island generally winter in Northern and SW Norway, the Faeroe Islands, Iceland and in Greenland.

BTO recoveries give a reasonable hint as to the origins of our Glaucous Gulls, and we've had a few over the years. The following was an extract from a Birding World article I wrote a while back.....

"19 May 2003 Glaucous Gull A bird accidentally caught in a fish barrel at Scalloway, Shetland, on 12 January 1986 was found on this date at Hopen, a Norwegian meteorological station near Spitsbergen (2,100km). Other foreign movements include birds from Glasgow and Fair Isle to the Faeroes, and several records of birds ringed as chicks in Norway, Bear Island and Iceland. The most remarkable though are the recoveries of two birds with consecutive ring numbers, ringed as chicks on 21 June 1982 at Amyrar, Iceland. Both were later found dead, one at Ballycotton, Co Cork, on 26 March 1983 (1,696km) and the other on Benbecula, Western Isles, on 14 July 1984 (1,181km)!"

''Lee Evans quoted sources that eastern Canadian Arctic Glaucous Gulls are relatively sedentary in migratory movements. I am not so sure 'sedentary' is accurate. Two colour ringed Glaucous Gulls, ringed as nestlings on South Hampton Island, Canadian Arctic were observed in the first winter after ringing at St. John's, Newfoundland. This is further than the distance the Glaucous Gulls (described as migratory) travel from eastern Greenland to Iceland. The thousands of Glaucous Gulls wintering in eastern Newfoundland can't all be from Labrador breeding sites and must include good numbers of Arctic breeders.

Not sure if you are implying your birds are racially distinct? I've been playing with various other theories - could head streaking be sexually-specific? Figuring out that male Pochard winter in different locations to females is easy, but to prove that Glaucous Gulls do the same would be more difficult...''