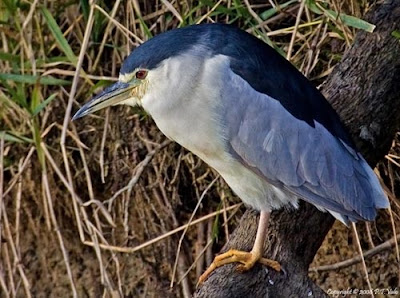 Adult Black-crowned Night Heron, Royal Military Canal, West Hythe, Kent, December 2008 (Pekka Valo)
I must be mad, but yes I walked six miles this afternoon to finally connect with a BLACK-CROWNED NIGHT HERON for my British year. The bird, an adult in winter plumage, was showing very well on the Royal Military Canal at TR 074 343, south of Falconhurst Farm.

The bird is particularly flighty and unapproachable and disturbs with ease. It seems to favour the dam area (previously favoured by the American Green-backed Heron in November) early morning but then moves west with more and more disturbance. Today I parked in West Hythe and ended up walking three miles west of the car park, along the very muddy footpath skirting the south bank of the canal. This was within 200 yards of another road, leading south from the B2067.
Posted by Lee G R Evans at 23:14