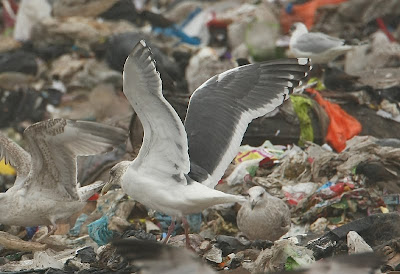 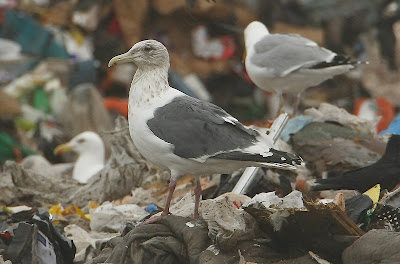 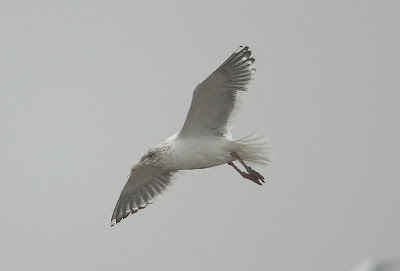 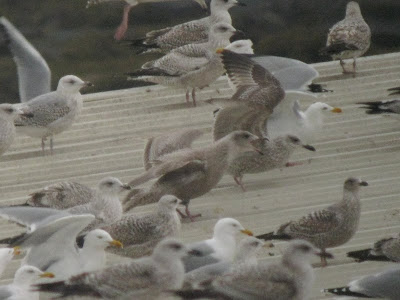 After remaining incredibly elusive and erratic, gull expert Steve Arlow cannot keep away from Essex's SLATY-BACKED GULL now, relocating it once again on Saturday at Pitsea Landfill and obtaining yet more exceptional images (see top three above).
At the opposite end of Ireland, Dermot Breen photographed this juvenile THAYER'S GULL at Rossaveel in County Galway.
In Essex, the near-adult SLATY-BACKED GULL has been appearing with much more frequency than before, today unusually visiting a closed tip at Rainham from mid-morning. It soon lost interest in the tip and roosted on Wennington Marsh with other large gulls before moving to the reserve Target Pools to wash and bathe. It returned to the tip just after 1300 hours and remained in the area until 1454 hours at which time it flew east along the River Thames. In recent days, it has also visited the strictly private Pitsea Landfill again, where it loafed for a short while later in the Wat Tyler Country Park roost. The bird has now been successfully twitched by in excess of 1,800 birders.

Meanwhile, the first-winter ORIENTAL TURTLE DOVE was still to be found in Chipping Norton (Oxfordshire) today, ranging the gardens in the vicinity of The Leys and roosting in the treeline just west of the houses best viewed from Lord Piece Road or the lane just along from Jewson.

Please park sensibly and courteously and support the community by donating £5 towards the Daisy Fund, either by dropping the money through the letterbox or by sending a cheque to Emma Cockburn, 33 The Leys, Chipping Norton, Oxfordshire. Alternatively, help Birdlife Malta put in position 30 volunteers this year in an effort to safeguard the dramatically declining European Turtle Dove - full details of pledge support on my main UK400Club blog.

Two CATTLE EGRETS continue to be seen in the vicinity of Perry Farm House, between Alderholt and Ashford in Dorset; park on the B3078 and take the footpath west for about 200 yards to view north from the metal gate. Also, in West Cornwall, a single CATTLE EGRET continues to be seen on the Fowey Peninsular, just NE of St Winnow church, with another in North Devon just downstream of New Bridge.. All six GREAT WHITE EGRETS roosted at Ham Wall RSPB (Somerset) this evening, being visible from the first viewing platform at dusk.

The first-winter LONG-BILLED DOWITCHER that was showing ludicrously well at Poole Park (Dorset) has now moved back to Lodmoor NR 20 miles to the west, where it can be viewed from the Perimeter Trail and screens overlooking the lagoons.

In North Norfolk, the juvenile Hen Harrier showing characteristics of the Nearctic form hudsonicus continues at Thornham Harbour, whilst the juvenile seen on Lewis (Outer Hebrides) a week or so ago reappeared today with a male Hen Harrier in the Loch Barvas area. At least four ROUGH-LEGGED BUZZARDS remain along the North Norfolk coast, feeding by day as far west as Scolt Head and then roosting in the secluded plantation on East Hills, Wells-next-the-Sea, overnight, whilst the long-staying juvenile continues to be seen at South Ferriby on the Humber (North Lincs).

There was an unusual inland movement of LITTLE GULLS today and yesterday, with 8 birds at Port Meadow, Oxford, on Saturday being followed by two adults at Ogston Reservoir (Derbyshire) early this morning and two more on the River Thames at Belvedere (London),

In West Cornwall, the first-winter ROSE-COLOURED STARLING continues to visit the garden feeders and birdtables at the Weethes Cottages in Penalverne District, West Penzance, whilst at the feeding station at Rainton Meadows DWT (County Durham), two very well-marked SCANDINAVIAN ARCTIC REDPOLLS continue to visit with up to 85 Mealy Redpolls.

The juvenile BLACK-THROATED DIVER continues to show well on the Pylon Pool at Willington GP (Derbyshire), where nearby a herd of 16 BEWICK'S SWANS remains in the field by the A5132 at Egginton, just west of the A38 bridge. Two more of the latter were an exceptional record on Shetland, making landfall on the Loch of Hillwell in the south of the archipelago. Three GREAT NORTHERN DIVERS are still wintering on Carsington Water (Derbyshire), where today they could all be seen from Lane End Hide, whilst at King George VI Reservoir in Surrey (permit access only), two GREAT NORTHERN DIVERS remain, as well as the VELVET SCOTER, RED-NECKED GREBE and SLAVONIAN GREBE. Another RED-NECKED GREBE is inland at Westwoodside GP in Lincolnshire, on the pit just NW of the village

Up to 10 HAWFINCHES are visiting feeders with other birds in the Wyre Forest (Worcs), providing visitors with amazing views at the Lodge Hill Farm feeding station; view sensibly from the bridge to avoid unnecessary disturbance and to allow the birds to settle.

The first-winter AMERICAN COOT is still to be found on Termoncarragh Lake, on the Mullet Penionsula (Co. Mayo), whilst in County Galway, Dermot Breen and others have been studying and photographing a superb juvenile THAYER'S GULL which has been present in Rossaveel Harbour and Fish Farm for the past three days. A new first-winter BONAPARTE'S GULL was identified in Sligo at the Quay Street car park, whilst a juvenile KUMLIEN'S GULL remains at the same location..

The RICHARDSON'S CANADA GOOSE that has spent all winter with Barnacle Geese was seen again this morning in the Raghley area(Co. Sligo) whilst the adult female BLUE-WINGED TEAL remains with Shoveler south of the causeway at North Bull Island (Co. Dublin).

RING-BILLED GULLS include two adults at Nimmo's Pier, Galway Harbour (Co. Galway) and in Sligo Harbour (Co. Sligo), and singles at Cuskinney Marsh, Cobh (Co. Cork) and O'Callaghan's Strand in Limerick (Co. Limerick), whilst the adult BONAPARTE'S GULL was today back in the vicinity of the Pilot Camber in Cobh Harbour (Co. Cork). A few more GLAUCOUS GULLS than of late are being discovered, with two birds in Youghal (Co. Cork).