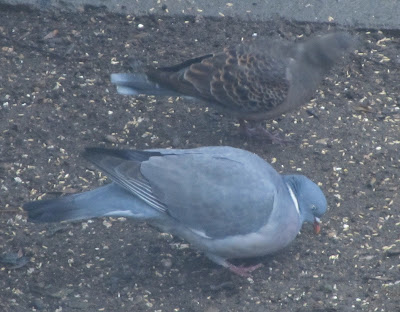 Last night I received the following photos of an unidentified pigeon taken in a Chipping Norton garden during the snowy period before Christmas.

They clearly show a 1st winter ORIENTAL TURTLE DOVE of the race orientalis. The bird was present on 15th, 16th and 18th December 2010 but has not been seen since. The tiny garden it visited is not viewable but the large trees it rested in can be seen from Foxfield and Fox Close. It was looked for today with no joy but I guess it could easily still be in the area. There is a free car park off Albion Street.

Obviously this is the first record of OTD for Oxfordshire. It's about the eighth record for Britain but the first ever of the nominate race. Oxon scores again!

It would be good to get the whole town checked out over the coming days but it may well remain the one that got away (Ian Lewington).
Posted by Lee G R Evans at 23:27