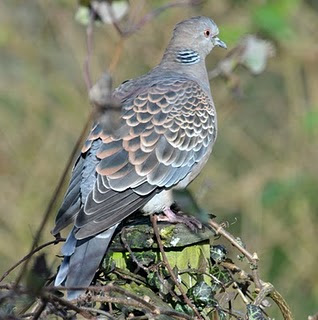 Those visiting the Chipping Norton Oriental Turtle Dove (photographed above by local birder Pete Barker) are indirectly helping this birds close relative - the European Turtle Dove. Your donation of £5 will go a long way in helping financing over 30 'spotters' this spring

Europe's birds will soon be returning from their wintering grounds. Many will fly over MALTA, facing a real threat of persecution from illegal hunting and trapping.

To counter these illegalities, Birdlife Malta will be this year again running its annual conservation camp ''Spring Watch'' between 10-24 April. The camp will monitor bird migration, maintain a strong presence in the countryside to deter the illegal killing and trapping of wild birds, and report illegalities to the local police.

The European Court of Justice in 2009 ruled that Malta breached the Birds Directive by opening a spring hunting season from 2004 to 2007. However, the Maltese government, succumbing to pressure from the hunting lobby, opened a 6-day hunting season in 2010 and adopted legislation making longer future seasons with larger bag counts possible.

The Commission last October renewed legal action against Malta over spring hunting, to which Malta's Prime Minister reacted by stating that Malta is 'prepared to go all the way' for an open spring hunting season - even if this means the country must pay fines.

Birdlife Malta intends to monitor and document the extent and impact of spring hunting through Spring Watch - an important part of the campaign against this unsustainable and illegal practise.